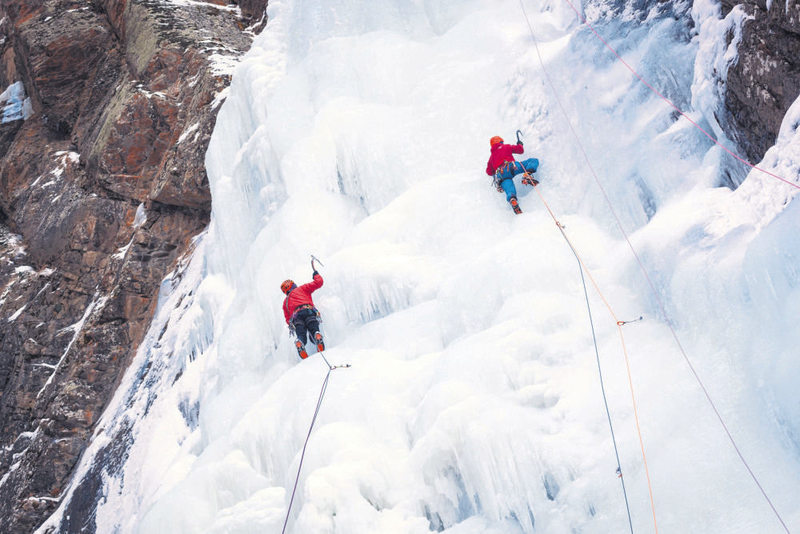 Turkey is on the fast-track to becoming a popular rock-climbing destination with its wide variety of natural rock formations and year-round sunshine. There are all styles of climbing to be found in Turkey, including sports, adventure, bouldering and now ice climbing and even highlining are on the rise. Starting today, master climbers will be convening on Erzurum for the International Ice Festival, and in the first week of February, highliners from all over the world will be walking tightropes set up in the mountains of Geyikbayırı in Antalya.

Today begins one of Turkey's biggest rock climbing events in one of the biggest winter sports regions of Erzurum. The International Ice Climbing Festival held from Jan. 22-26 will draw some of the world's master climbers to terrain including nearly two dozen frozen waterfalls. Officially named the Büyükşehir Belediyesi Emrah Özbay Uluslararası Buz Tırmanış Festivali, after a fellow climber who passed away a year-and-a-half ago, this fast-growing festival is held in this special region that boasts Turkey's highest peaks at 1,850 kilometers high. The facilities in this eastern Anatolian province, which also hosted the 2011 Winter Universiade, also make this festival a contender to host the International Ice Climbing World Cup, hopefully even as soon as next year. This is also the first climbing festival to be included in the International Climbing and Mountaineering Federation (UIAA).

Last year, 172 climbers from 18 different countries came out to test the terrain. This year at least 150, a majority of which will include Turkey's climbing pros, as well as other master climbers from nearly a dozen countries, will be in attendance. Speaking with Atak Search and Rescue and Nature Sports Club Director Çetin Bayram, he said there will be about 30 master climbers and the remainder will be newer climbers foraying into the sport of ice climbing.

Some of Turkey's top climbers have been setting up routes on frozen waterfalls. There are 14 existing routes and seven new ones marking a total of 21 waterfalls that span between 30 to 450 meters in elevation that will be ready for people to climb. Participants will stay in campsites and guest houses in the region, and many climbers will be housed by the Teachers House.

I also had the opportunity to speak with Nejat Akıncı, one of the founders of the festival and a board member of the UIAA, who explained that they held the first festival last year in conjunction with the Erzurum Municipality and Governorship in an effort to take advantage of the frozen waterfalls in the region and to promote the area through a social event. "The fact that a number of waterfalls freeze here in the region actually makes it the perfect environment for this sport. Coupled with the facilities, the UIAA is considering holding the Ice Climbing World Cup here in 2017," Akıncı said. It was also an all-inclusive festival, he said, adding that the organization provided transportation and accommodation, which drew in a lot of foreign climbers, each of which were impressive and successful athletes. "In other words, by designating a certain budget, efforts are to promote the region, and to increase popularity in this unique sport in this natural environment," Akıncı said.

Erzurum is easily now one of Turkey's top skiing destinations as well, offering cross-country skiing in addition to climbing. With this festival, the region's popularity among international pro-climbers is fast on the rise, making this an excellent time to watch the pros in action while discovering this winter sports wonderland. Meanwhile in Geyikbayırı, slackliners, which usually double as climbers, from all over the world will be convening in the first week of February for an acrobatic event unlike any other.

Held from Feb. 6-13, The 4th Turkish Highline Carnival will bring out hundreds of highliners from all over the world, walking a tightrope in the mountains of Geyikbayırı, Antalya - an area that doubles as one of if not the most popular rock climbing destination in Turkey. Located just 25 kilometers from the Antalya city center in an area famed for its year-round sunshine and a place where you can swim in the Mediterranean and climb or ski in the mountains all in the same day.

So, what is highlining? Also used as a tyrolean traverse, in other words for climbers to get to one point to another on ropes, highlining is basically the pinnacle of the sport of slacklining. In slackline, similar to a tightrope walker, a person walks on a rope between two stabilized points. When highlining, this is done at an elevation above sea level or above ground. Tricklining, which will also be taught and demonstrated throughout the event, is the additional implementation of tricks and acrobatics.

Hundreds of highliners from all over the world will travel to Antalya for the fourth edition of this growing annual event, which has a strong foothold - pun intended - in the international "slacklining" community. Hundreds will be coming out for this very special festival, spanning from professional record breakers to newbies in this skilled sport. In addition, many of these extreme trapeze artists also tend to dress up in costume as they traverse a tightrope between mountains in the middle of the sky, making this just as fun a spectator event. In addition to slackline and highline training, there will also be opening and closing parties as well as yoga and juggling workshops on the sidelines of this international carnival for highline lovers.Situated within the borders of the Sivri Dağ and Termessos national parks, Geyikbayırı boasts the largest crag in Turkey, at 4 kilometers long, and is predominantly limestone. Participation in the festival is free of charge and professionals will be setting up around 20 or so lines from 15 to 100 meters in length that sport spectacular views of the forest and mountains for skilled pros and newbies to try. All of the lines will be in walking distance to a cluster of climber's camps offering accommodation via bungalows for the carnival. All popular gathering spots for climbers, the aptly named Climber's Garden has bungalows, while the newer and more upscale The Land is composed of 11 units with a communal restaurant. Josito, which also has chalets and even caravans to stay in, and Rido Camp are other options for great places to stay on this winter adventure.

If you are a climber or aspire to be, other festivals to look out for are the Bozdağ Winter Mountaineering Festivities, held from Feb. 13-14 in İzmir province. From March 12-17 there will be a climb held by İDADİK in the Rize Kaçkar Mountains, and in April, the Kaynaklar Rock Climbing Festivities, which is also in İzmir and held in April, is one of the biggest climbing events in Turkey.
RELATED TOPICS