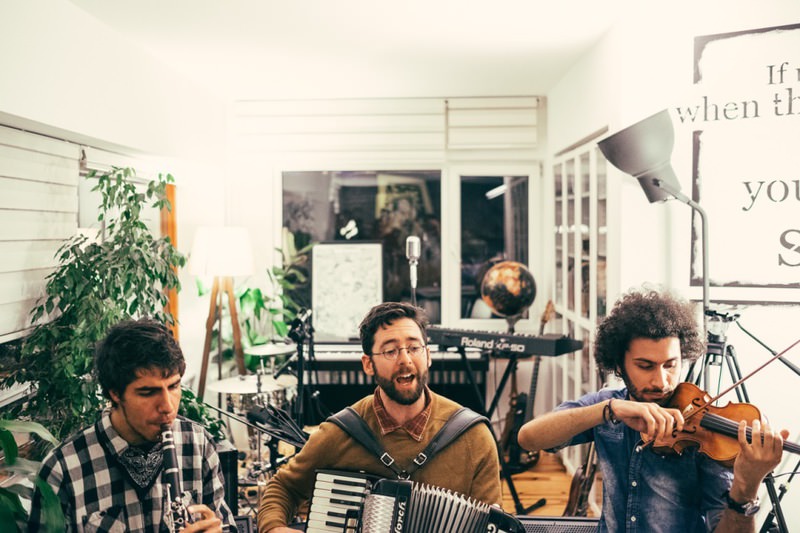 Country for Syria is an international music group based in Istanbul that melds the melodies of American country classics with traditional Arabic music. With members from America, Syria, Turkey and Spain, they aim to bring awareness to the plight of refugees and showcase Syrian musicians displaced in Turkey

Creating a unique genre composed of American country music with an Arabic infusion, Country for Syria are a new band that combine the epitome of the West and East in beautiful harmony in an effort to bring awareness and support to Syrians affected by the conflict. Based in Istanbul, this international band, with members from Turkey, America, Syria and Spain, regularly invites Syrian musicians as guests to play on recordings and shows. In addition to playing a slew of upcoming shows in Istanbul, they also make regular trips to refugee camps in southern Turkey to play for refugee children and express their solidarity.

I had the opportunity to talk with Owen Harris, one of the founding members of the band and a fellow American expat living in Istanbul. Asking him who the members of this innovative group are, Owen said, "Our group has a collective structure. We have four core members, who are myself, Owen Harris, an American from Florida who grew up in North Carolina. I play Accordion and piano and also do most of the arrangements and conducting for the group. I'm responsible for adding the country elements and bringing the English side. There is Bashar Balleh, a Syrian from Latakia who plays guitar and takes care of recruiting guest musicians, translating songs into Arabic, writes Arabic lyrics, and coordinates with refugee organizations. Başak Oktay from Antalya, Turkey plays guitar and sings, as well as manages booking, marketing, promotion, networking, and Turkish logistics. Then there is Juan Bayon who is from Valencia Spain and plays Clarinet. His role is mostly to keep us all calm under pressure and be the calm among the storm. We've played with other violinists, kahnunists, singers and percussionists from Syria as well," said Owen. 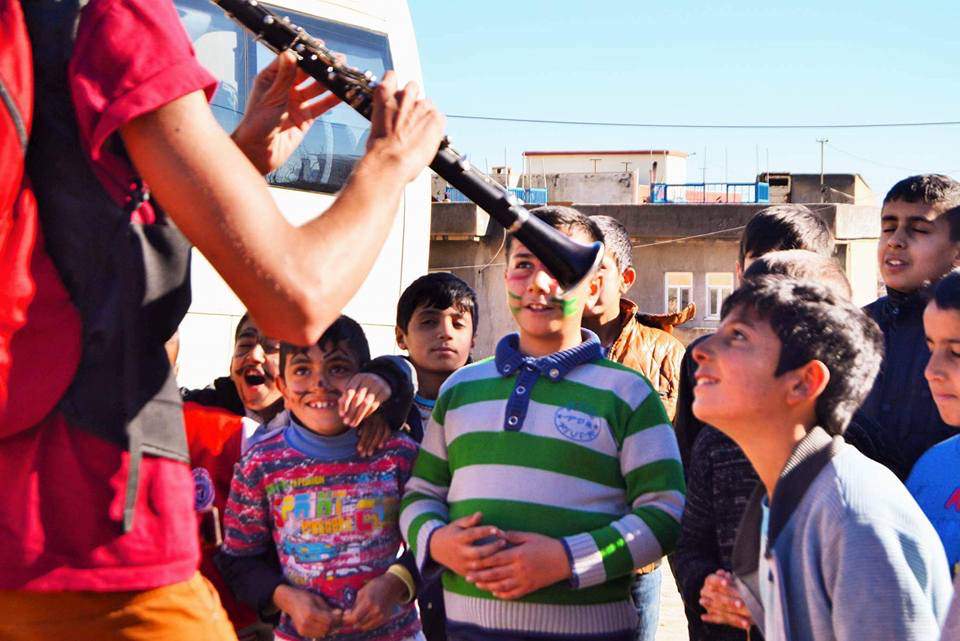 I asked how the band came together to which he told me, "I met Bashar over the summer and we started playing some shows together along with some other Syrian musicians. Country for Syria as an idea came together during a jazz show we played at a Small Projects Istanbul event at Creatolye in Cihangir. We had run out of songs from our original set list and had more time to fill. I quickly showed everyone the chords to a few country songs (Hey good Looking, Hesitation Blues, Salty Dog), and we really had a lot of fun. The Syrians mixed in elements of the Arabic music along with the country chords. That's when the idea of playing country music with Arabic music first came to us."

I asked Owen to tell me more about this unique fusion of music epitomizing the West fused with Arabic influences, to which he tells me, "The music is a blend of American Country music and traditional Arabic songs. We play some covers and have written some originals. Country music has its origins in the American civil war. Syrians are in the midst of their own civil war and a lot of the experiences they are going through are in some ways similar to the experiences of Americans during the 1860s. The themes of Arabic music also have a lot of connection to country: Longing for home, lost love, love of country and home, wandering. Our goal is to make the connection between these styles of music, engage in a bit of cultural diplomacy, and to showcase talented Syrian musicians to an audience that normally might not be able to connect to Middle Eastern music. At the same time, we are supporting those affected by the conflict."

Country for Syria will be playing a bunch of upcoming shows in Istanbul, such as their Friday Feb. 26 concert at the Cihangir venue CreAtolye (otherwise known as the Old City Comedy Club) where 50% of proceeds will go directly to Syrians affected by the conflict. The show starts at 9 p.m. and tickets are TL 20 at the door. On Tuesday, March 1, Country for Syria will perform at Kumbara in Beyoğlu and on Saturday March 5 at Atölye Kafası, an innovative new café-slash-wood workshop in Balat.

"We also have plans to visit refugee camps in Hatay, Antalya, Siirt, Diyarbakır, and more", says Owen who explains that in addition to playing venues around Istanbul, they have recently had the opportunity to travel to refugee camps in southeastern Turkey with a circus group. "We traveled to Yazidi camps in Diyarbakır and Syrian refugee camps in Mardin to put on shows for the children. It was on the first trip that I reconnected with Juan and he decided to join the band," says Owen. In fact it was Small Projects Istanbul, a volunteer organization assisting refugees that brought them together, explains Owen adding that Syrian member Bashar has strong connections with both SPI as well as Project Lift and Owen is also affiliated with Humanwire, another support mechanism for refugees.

I asked Owen how he and the other members of the band ended up in Istanbul and he said, "I have Turkish family, and first moved here in 2012 to study in Boğaziçi University. After studying modern language and political science in the US, playing in a tango orchestra, working as a music director for circuses in the U.S., and working for the Public Affairs section at the U.S. embassy in Romania, I now play in Country for Syria.

Bashar came to Istanbul from Latakia two years ago to flee the conflict in Syria, and now works for an NGO called "Project Lift" as well as playing with various projects," said Owen. Bashar also recently performed at the U.S. Consul General Chuck Hunter's home in a showcase of Syrian refugee musicians. "Başak is a material engineering student at YTU who hails from Antalya and Juan Bayon studied in Turkey in 2011-2012 and has since returned to play music and teach Spanish," says Owen.

I also asked what their expat experience has been here in Turkey to which Owen told me, "All of our experiences are different and that informs the way we interact with Turkey as foreigners. For Juan and I, being here is a choice. We are here because we love Istanbul and the country. Başak was born here and is at home and comfortable navigating within the culture. For Bashar it is entirely different. He's not here of his own accord, and he can't return home."

I asked Owen if there were any plans for an album in the works, to which he said, "We'd love to record an album. Right now, we are playing a set of mostly covers, with a few original songs mixed in. Once we get an album's worth of original material, we've had generous offers from local recording studios and sound engineers. We're also planning a crowdfunding campaign that can help us with the financial burdens of recording and managing all the logistics of an album through donations."

"Part of our project is to raise awareness and solidarity for those affected by the crisis in Syria," emphasized Owen adding, "We invite musicians from anywhere to share their own music with us, to make a short video and post it with the hashtag #countryforsyria to show support. We have already had a few great submissions."

To hear songs released by Country for Syria and to stay afloat of upcoming shows, you can check out their website, countryforsyria.com as well as their Facebook and instagram pages at Facebook.com/countryforsyria and @countryforsyria, respectively.
Last Update: Feb 19, 2016 3:33 am
RELATED TOPICS