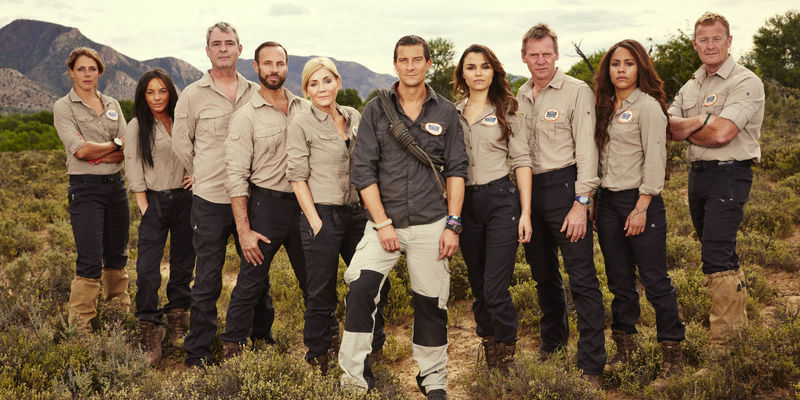 The reality competition show 'Survivor' may be topping the charts in Turkey, but there are also a number of dedicated shows exploding all around the world that take surviving in the wild to the extreme, including on the Turkish tube

Reality survival shows, in which presenters and participants test their survival skills in the wilderness, have fast become an international phenomenon. This new trend has resulted in the genre expanding to a variety of educational reality shows teaching vital survival skills and demonstrating ways to stay alive in the wild to views.

In this era in which climate change is definitely one of the most pressing issues in the world, the abundance of these educational survival shows, which bring awareness to the planet's natural surroundings and teaches the viewer the basic skills to survive without any of the comforts of modern life, offers a refreshing way to watch TV yet feel connected to nature. The following is a list of the best shows out there to bring the struggle of basic existence in the wild, such as finding water, lighting fires, building shelters and sourcing food all while trying to survive the elements, to the tube from the comfort of your couch.

Bear Grylls is undoubtedly the biggest household name when it comes to survival skills experts. One of the youngest Britons to climb Mount Everest at the age of 23, and the youngest to climb the "unclimbable" Ama Dablam, Grylls also holds a Guinness World Record for the longest indoor freefall; however, these are just but a very few of his accolades. He became a household name with his show "Man vs. Wild," also known as "Born Survivor" and "Ultimate Survival," in which he is plopped into different parts of the world to test out the toughest of situations and survival skills. This show lasted seven seasons and even landed him in Turkey, in addition to episodes where he takes Will Ferrell and Jake Gyllenhaal along for the ride.

But Grylls actually has nearly 10 shows or so in circulation taking on varying angles of the survival experience. In "Get Out Alive," Bear tests 10 teams of two on extreme challenges and conditions in New Zealand, and in "Survival School" he takes a group of young teenagers into the hills of Wales. In "Running Wild" and "Wild Weekends with Bear Grylls," the adventurist takes out A-list celebrities such as Ben Stiller, Zac Efron, Kate Hudson and Kate Wilson on a two-day adventure in the wild. The pinnacle of this series, however, was its finale with United States President Barack Obama.

In "The Island," Bear drops groups of British men and women on remote islands leaving them to fend for themselves, and his U.S. version is much of the same except with a group of American men. In "Mission Survive," Bear hits the echelon of competitive reality survival shows as eight celebrities embark on a 12-day expedition in the rain forest of Costa Rica where they must learn to navigate and survive in difficult terrain all while being voted off one-by-one. Although hard to find but interesting to know, the offshoot "Survivor Games" has Bear joined by eight Chinese celebrities to test out staying alive in tough terrain.

Ed Stafford is another English explorer with a Guinness World Record for being the first human to walk the length of the Amazon River, which was documented on the series "Walking the Amazon." "Naked and Marooned," along with its U.S. version, "Naked Castaway," follows Stafford on a deserted island for 60 days with nothing but his camera. His most popular show is "Marooned with Ed Stafford" in which he spends 10 days in remote destinations around the world filming himself as he tries to not only survive but thrive in complete solitude and with no clothes, food or tools.

In "Man, Woman, Wild", U.S. army special forces survival expert Mykel Hawke Pierce is joined by his British television journalist wife Ruth England as they are dispatched to different parts of the world to try to survive for half-a-week in the wild. "Lost Survivors" is their latest version based on the same premise where they source water, hunt, gather and turn the wild into a home. "Men, Women, Wild" is a series following three couples situated in different parts of the world trying to survive their relationship almost as much as the wild.Tea for two"Dual Survival" has two experts of opposing survivalist perspectives attempting to survive in tough natural surroundings with minimal gear where they battle the elements and sometimes each other. Members of the popular show have gone on to star in the offshoots "Dirty Rotten Survival," in which three friends reinvent the American road trip with survival challenges, and "Dude, You're Screwed," where five fellow survivalists send each other to harsh environments where they have only 100 hours to reach civilization.In "Remote Survival," two average American men are deserted in the wilderness of Utah and Washington State with only a receiver in their ear, from which they are remotely guided by two survival experts, and a GPS transponder, which allows them an escape at any moment. "Tethered" takes togetherness in the wild to a new extreme as two complete strangers with opposing philosophies embark on an epic 10-12 day journey in the wilderness while tethered together by a six-foot rope as they try to reach their extraction point.

Lord of the Flies

What started as a group of urbanites being dropped off in rural Alaska with limited supplies and an emergency GPS signal to be helicoptered out if necessary, "Out of the Wild" has now gone to Venezuela in its latest season where nine people try to tough it out to the end to prove they can survive in the wild.

Although yet to hit Turkey's screens, "Naked and Afraid" is perhaps the most daunting of the survival show genre as it pits two complete strangers, many a-times a woman and a man, together to try to stay alive in the wilderness for 21 days completely naked, with each allowed just one selected tool for survival. This American reality show reached a whole new level with "Naked and Afraid XL," which follows a group of 12 survivalists trying to survive in the wilderness for 40 days in their birthday suits.

"Survivorman," hosted by Canadian survival expert Les Stroud, who spends up to 10 days alone in remote environments with little supplies and is tasked with filming himself, is also one of the pioneering shows in the genre. In its follow-up, "Beyond Survival," Stroud is joined by members of the world's last remaining indigenous tribes to learn new survival skills. Stroud and his wife have also made a film about living a primitive life in the Canadian wilderness.

Ray Mears is a British woodsman and bushcraft expert whose shows "World of Survival" and "Extreme Survival" were some of the earliest programs in the genre. In both, Mears travels all over the world to meet with indigenous people and talk survival skills. He has since branched out to other shows including "Bushcraft," "Survival," "Wild Britain" and "Ray Mears Goes Walkabout" in which he traverses the Australian outback.

Last but not Least

"Live Free or Die" follows the lifestyle trend of five individuals "re-wilding" - in other words, reverting back to our roots, and living off the land and off the grid without the comforts of technology in the backwoods of America.

A very special shout out

Serdar Kılıç is Turkey's very own survivalist expert who for years now has graced Turkey's screens with his popular shows "İçimdeki Doğa" (A Man's Wilderness), "Doğada Tek Başına" (Alone in Nature) "Doğada Çocukla" (In Nature with a Child) and Doğadaki İnsan (People in Nature). Not only does he provide basic survival skills, but he also shares his love for bushcraft as well as building and creating with what nature has to offer. We have watched him build a cabin in the woods, a canoe and a variety of practical shelters, furniture, shoes and tools. His program is soothing and informative, and takes place in the proverbial backyard of our adopted homes of Turkey.
Last Update: Mar 04, 2016 1:20 am
RELATED TOPICS