Turkey's leading mountaineer enjoys a life on top of the world 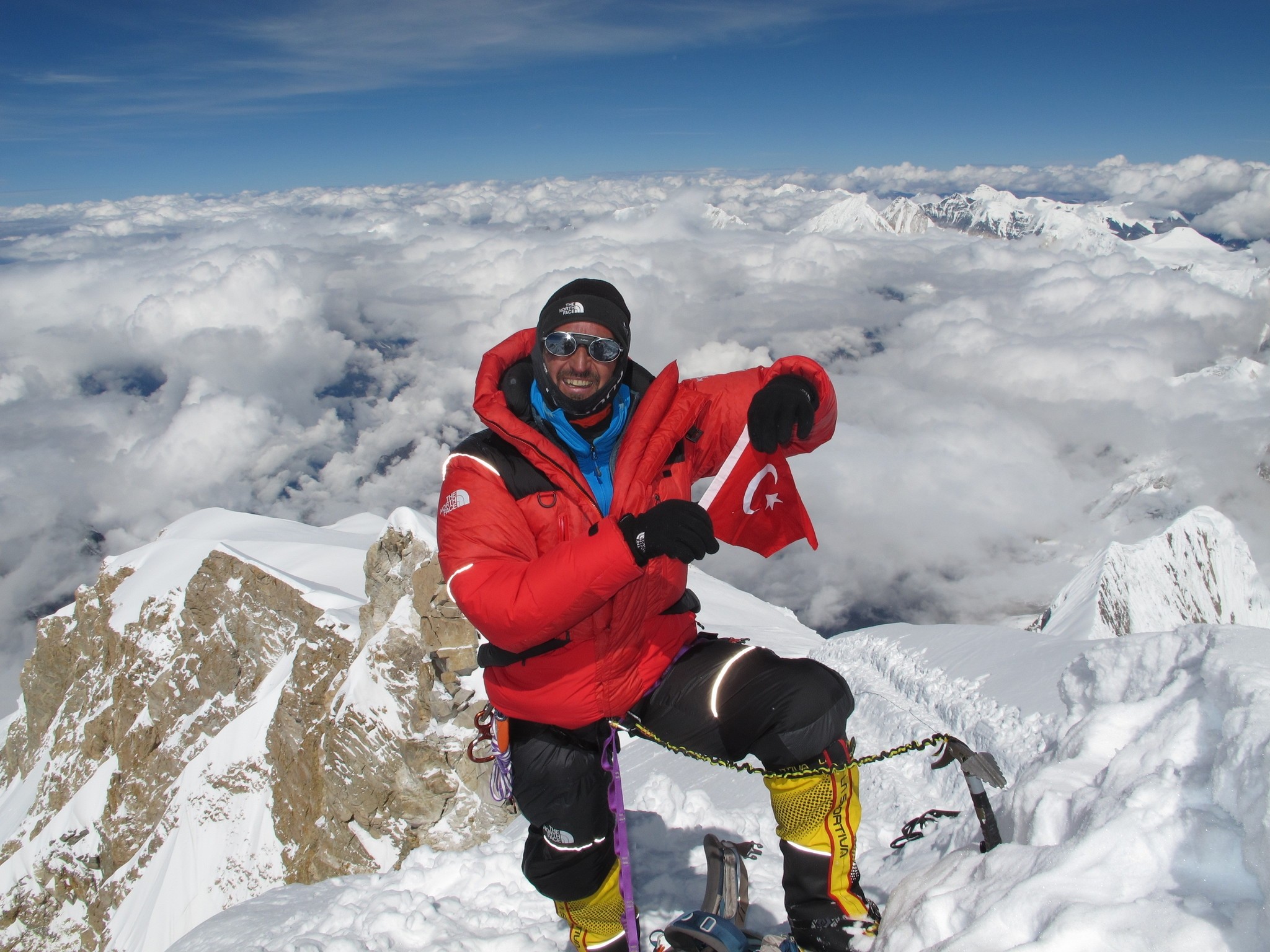 Among Turkish mountaineers, Tunç Fındık undoubtly has a special place as his everlasting zeal has made him ascend the world's most treacherous peaks. He recently discovered an unnamed rocky mountain in northeast Turkey and gave it the name Democracy Mountain to commemorate the victims of the failed coup attempt

Tunç Fındık is Turkey's most successful mountaineer currently tackling an unprecedented record for his country and one only taken on by a few dozen people in history. When completed, his 14x8,000 project, in which he plans to tackle all of the world's 14 mountains, such as Everest and K2 that have an elevation of over 8,000 meters, will make him the first Turkish citizen to ascend the world's tallest and most treacherous peaks. This is extreme climbing at its best and Turkey is lucky to have such an athlete who is also literally paving new trails for the sport in Turkey. For years, I personally have been following the career of this handsome and intelligent athlete as the sport of mountaineering and rock climbing continues to grow in Turkey. The type of individual who radiates a very special energy I had the thrilling opportunity as an avid fan to discuss his 14x8,000 project, in which he tackles the world's largest peaks, making a name for himself as the very first Turk to mark a number of firsts in the climbing world.

"There are only 14 peaks that are above the 8,000-meter altitude on our planet earth. All of these giant peaks are located in Nepal, China, Pakistan and the Himalayas and climbing all of the 8,000 meter peaks represent a difficult record for mountaineering, with each climb being comparable to winning an Olympic medal, only much harder and incomparably dangerous," said Tunç, explaining that Project 14x8,000 has only ever been completed by 36 climbers from 15 different nations up until now.

Each ascent takes about two months' time to complete, Tunç tells me explaining that "climbing an 8,000 meter high peak is dangerous because of the extremely low atmospheric pressure and related lack of oxygen at high altitudes, which the human body is not able to exist in for extended periods of time." In addition, he says, "Extreme cold and raging storms, deep snow, steep technical terrain on great rock and ice faces, dangerous glaciers, icefalls and crevasses, rockfalls and huge avalanches all add to the dangers of the high altitude environment."

I asked Tunç when and how he began his climbing career, to which he said that it all started when he began attending Bilkent University in 1989 and then joined Turkish Alpine Club's National High Altitude Climbing Team. An avid trekker since he was a child, he said, "mountains were fascinating and magic to me and they were where I could find and express myself best."

In 2001, Tunç found a sponsor for his first-ever summit to Mount Everest, and then proceeded to take on three more 8,000 meter peaks, which made him realize he had the ability and physical and mental strength to successfully summit all of the tallest peaks of the earth. The last 8,000 meter peak he ascended was Broad Peak in Pakistan last year, leaving him with just four more summits to go; Annapurna at 8,091m in Nepal and three in Pakistan (Broad Peak 8,047m, Nanga Parbat 8,125m and Gasherbrum1 8,058m, two of which he plans to tackle this upcoming year.

Tunç's life is devoted to mountains and when he is not on an epic climb, he is in Turkey discovering and establishing new routes for climbing. "Turkey is a land of mountains and has great potential for climbing, and I am really happy to discover this. We have tons of mountains everywhere and many of them untouched and extremely attractive. All provinces of Turkey from west to east, north to south have a big potential for this sport and the administration is realizing this and helping," said Tunç explaining that he spends much of his time setting up new technical climbing routes on ice, rock and large mountain faces in various locations with his climbing partners, the most extraordinary being the exploration of waterfall ice climbing in Erzurum's Uzundere in Eastern Turkey, a place with great opportunity for modern routes and contemporary climbing, Tunç says. "Most of the first ascents in the region belong to him and there is still a huge potential, happily recognized by the officials, for which we are very pleased," said Tunç adding that the Municipality of Erzurum kindly supported the establishment of the International Ice Climbing Festival in Uzundere, which this January will be going into its third year. Although now considered an honorary citizen of Erzurum, Tunç proudly shares, he is active in all areas of climbing in Turkey, having opened more than 400 new routes, made multiple first winter ascents and climbed over 1,000 summits.

Most recently, Tunç conquered an unnamed and unknown rocky mountain peak at 3,440 meters' altitude in the Kaçkar in northeast Turkey and gave it the name Demokrasi Dağı (Democracy Mountain) to commemorate the fallen people of the failed coup attempt on July 15.

Tunç is also a prolific author, having penned a total of nine books, ranging from guides, instruction and adventure books, two of which he has written in English; "Altitude 8,000," which describes in detail his various 7,000 and 8,000 altitude climbs and the guidebook "50 Climbing Routes in the Aladağ," a mountain range regularly referred to as the Alps of Turkey. His other books include memoirs of his Everest and K2 climbs and an instruction book on winter climbing, to name just a few. Tunç's documentary of his 2012 climb with friends Azim and Fabrice, titled "K2 Mountain of Mountains," has become an unexpected success, he says, "because up until today, nobody has been able to shoot the summit of K2, the world's hardest mountain as we did. So, the documentary is well liked worldwide, and I can proudly announce that it is the most watched Turkish documentary ever (on YouTube) with more than 700,000 viewings." As for some of the most rewarding and difficult moments, Tunç says, "In climbs such as the K2, it is like a war within yourself really, you are going against your mind which seeks comfort and relaxation. After spending a quarter of a year on a high mountain, in the cold, hungry, thirsty, weary and anxious at times but committing everything, there no longer remains any difficulties in life at home because one gets used to these hardships. And, standing atop an 8000 meter peak is the most rewarding experience, for nothing can buy that feeling except your own hard mental and physical work."
RELATED TOPICS