Palestine breaking into the fashion world 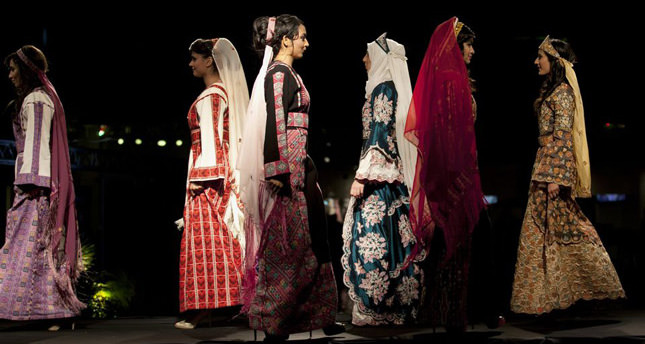 From Thursday to Saturday, models took to the catwalks in Ramallah but the event also drew the ire of prominent figures in Hamas, who labeled the event 'harmful'

WHILE stalled peace negotiations and an announced reconciliation between Hamas and Fatah have made headlines in Palestine as of late, at the end of last week some Palestin- ians managed to get Palestine in the news for something altogether different: Palestine Fash- ion Week 2014. The three-day event started in 2013, and was hosted by the Palestinian life- style magazine Layalina and modeling firm Modelicious Agency and sponsored by the Italian Consulate-General and the Palestinian Authority (PA) Ministry of Culture. The three- day show concluded successfully on Saturday in the West Bank city of Ramallah at the new Movenpick Hotel.

Palestine Fashion Week 2014 featured 40 designs by Jamal Taslaq, a famous Italian de- signer of Palestinian descent. Following in the footsteps of trend-setting cities, Ramallah is looking to pave its way into fashion. Though Ramallah is not internationally known for its trend setting ways, organizers hope that this new project will draw attention and bring light to talented local designers. Modelicious General Manager Tamer Halabi confidently stated, "every country has a fashion week and we thought we could have fashion week of our own, instead of smaller f shion shows here or there."

Halabi went on to expla n that this year's theme focused on exquisi ely embroidered Palestinian dresses, though the collection did include modern design . Halabi proudly stated that the fashion show was intended to make a statement, namely that "we Palestin- ians exist...We are surviving, we have talents, we have designers and we can comp with world fashion houses." Amongst the stars of the parade, there was a special guest. Turkish actress Beren Saat. The Turkish A-lister stared in movies and series such as, "Aşk-ı Memnu" (Forbidden Love) (2008-10), "Fatmagül'ün Suçu Ne?" (What is Fatmagül's Fault?) (2010-12) and "Benim Dünyam" (My World) (2013).

The event however did not go without criticism from Hamas and other radical Palestinian groups. Taslaq was scrutinized for combining modern designs with traditional dress and for using the colors of the Palestinian flag. Hamas legislator, Yunis al-Astal attacked the PA leadership in Ramallah and accused them of inciting corruption among Palestinian men and women. He claimed that the events were acts that "aimed at normalizing ties with the occupation...This is a new crime that will be added to the many crimes of the Palestinian Authority against its people." Reporters from Reuters reported that Sheikh Hamed Bitawi, a prominent Hamas figure in the West Bank, said that the fashion show was held in violation of Islam and the interests of the Palestinians. Bitawi went on to say that the show was "harmful" to the Palestinians because it presented to the world a people living in comfort and with time to organize fashion shows. He too accused the PA leadership of spreading "corruption" among Palestinians.