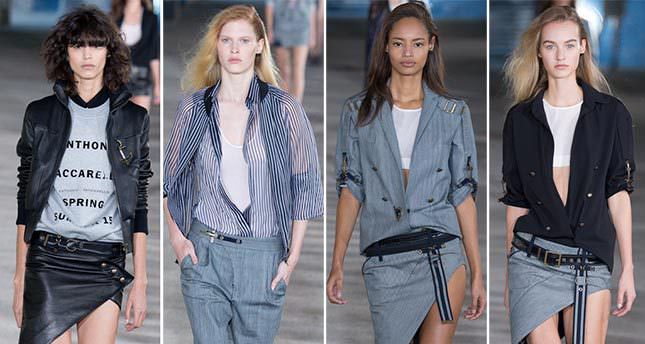 Milan fashion week once again has all eyes on the podium as the spotlight brings talent to the stage. The 2015 Sprint summer collection displayed some of the most extravagant works of art from the most talented designers

The world's travelling circus of fashion editors, buyers and celebrities waved goodbye to the cobbled streets of Milan and cried "Bonjour Paris" bracing itself for the last, most colorful furlong of spring-summer 2015 ready-to-wear shows. Tuesday's a day for the up-and-coming fashion designers and stars of tomorrow. And it can pack some surprises. Anthony Vaccarello, who has dressed Gwyneth Paltrow, gave himself an ego boost by plastering his name in huge letters all over his clothes, while newcomer house Anrealage tried to cook its models for the sake of art. As they say, "fashion has no mercy." Here are show reports and highlights from day one.

Japanese house Anrealage produced a highly original debut show in Paris. The pressure is on for any newbie on the calendar to make a mark. House designer Kunihiko Morinaga took this literally and cooked imprints into his designs, live during the show. Several models in plain black and white trapeze-silhouettes, and stencil-like cotton and lace outer-garments, walked into a "grill" area, where they stopped to be heated up by intense beam lighting. When they walked off stiffly, in plate-bottom stilettos, the audience applauded on seeing rippled "grill" patterns that had been imprinted on the parts of the techno-fabric exposed. It resembled a sort of microwaved Jacquard. The models wore stiff, plastic bob-like wigs and certainly looked like they needed a cold shower following this grueling spring-summer show.

Already famous in native Japan, award-winning Morinaga is known for his daring concepts that merge art and fashion such as a 2009 creation: a square box that becomes a trench coat when the box ribbing is taken out. Making the leap from Tokyo to Paris is a big step for a Japanese designer as it opens up the house to the international gaze. "Tokyo is already an international city with our own big fashion scene. New York is too domestic, too American. But Paris is the international fashion window to the world for us," said Hirofumi Kurino, senior adviser at Japanese clothes store United Arrows, who attended the Anrealage show. "There are the highest level critics and buyers here, and like (Japanese brand) Sacai that shows here, Paris means more customers and is seen as the next level for a Japanese designer," he added.

Anthony Vaccarello is one of the biggest names on the first day of collections. And he's not afraid to show it. The French designer was in a typically sexy mood for this print-rich show that featured his own name blown up on many of the looks. He began his musings with the sartorial pin stripe and business jacket silhouettes which were given a feminine lift with provocative, diagonal uber-miniskirts. And the mood for graphic prints continued in the form of huge blown-up writing, which spelled out letters from the designer's name and "spring" in black and white.

There was a certain feel for the Swinging Sixties, or the designs of Courreges, in the show's later slashed, figure-hugging monochrome minidresses that had a nice disco-sheen. Too many different styles meant, at times, there was a sense of overkill. But Vaccarello should be applauded for an enviable new scooped, U-shaped neckline that looks sensual without being trashy.

It was a devastatingly cool show for Devastee's tongue-in-cheek designers Ophelie Klere and Francois Alary. Kookie prints were the main thrust with teapots and church facades with smiley faces, huge polka dots, hands and rain clouds. The zaniness, delivered against an optical black-and-white check runway, made it seem as if Klere and Alary were winking at us throughout the whole 25-piece show. It worked well. Dark men's coats, and one double breasted jacket, gave way to more silken, diaphanous silhouettes like a light A-line coat that could have been a dress, or, elsewhere, a beautiful loose, navy jumpsuit with a black waistband and a limp sash. Silhouettes were loose and effortlessly feminine. And despite the myriad prints, which featured on almost everything, proceedings retained a sense of pared down minimalism thanks to the bare legs, light materials and sockless black patent leather brogues.