The history of Turkish fashion: Past to present 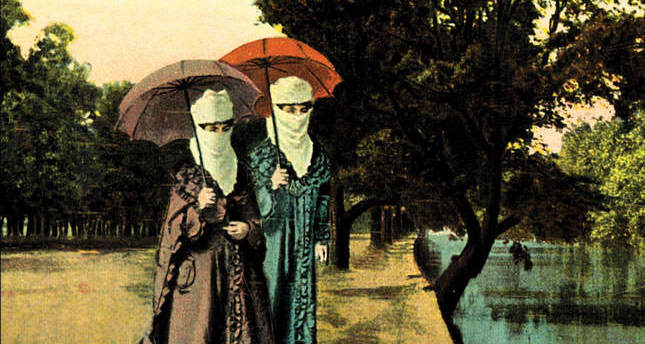 by İklim Arsiya Oct 03, 2014 12:00 am
The earliest source found on the history of Turkish attire dates back to the miniatures and wall pictures found in Central Asia. The Turks first appeared in eastern Central Asia as pastoral nomads, horse riders who followed their herds of sheep and goats. This way of living at that time – life on the move – brought about functional clothing styles. For example, the horse was the most common and inevitable form of transportation in the daily routine; therefore men and women's wear were similar as they were mainly unisex. The garments for both men and women included loose trousers suitable for riding, with front opening coats and vests or jackets that could be layered for warmth. The wearing of many layers has always been a sign of wealth and status. Distinctions of gender or status were also indicated by differences in accessories, such as jewelry and headgear. Prominent and often complex headgear was a particular characteristic of Ottoman dress.

Leather and felt materials had priority due to natural and social conditions. In addition to these sheepskin, fur and woolen materials were also used in the clothes of that period. Bashlyks (head coverings), just like clothing, were made of fur or sheepskin. Bashlyks were also observed to be symbols of status.Turkic migration from Asia to Anatolia caused many cultures to mix and integrate. This was especially reflected in their clothing, symbols and motifs. In the coming years, Kyrgyz, Uzbek, Uighur, Azerbaijan and Tatar tribes migrating to Anatolia each were influenced by the other. By the Ottoman period, as the borders of the empire expanded, new relations were established, and cultures and their clothing traditions adopted the Ottoman standard as Istanbul, Bursa, Bilecik, Denizli and Ankara became districts that specialized in textiles.

During the Ottoman Empire, socio-economic differences between the administrators and the common people also affected the clothing styles. While the Palace and its court displayed fancy clothes, the common people were only concerned with covering themselves. During the period of Süleyman the Magnificent, legal regulations on clothing were introduced. During this period, the wealthy wore caftans with fur lining and embroidery, whereas the middle class wore gowns or robes (cüppe) and the poor wore collarless short jackets (cepken) and vests (yelek). In the 16th Century, women wore double-layered long velvet shawls over their heads, and their outdoor clothing consisted of a "ferace," (abaya in Arabic) which is a collarless, long-sleeved, loose black garment. During the period of Abdülmecit II, the ferace was replaced by the "çarşaf" in a range of styles. However, the individuals in rural areas continued to wear their traditional style of clothing. These clothing styles, which prevailed until the mid 19th century and were imposed for religious reasons, entered a transformation phase at the beginning of the Republican period. In this period, with the leadership of Mustafa Kemal Atatürk, the clothing and hat reform had begun, and had a significant impact on Turkey. With these reforms, women's çarşaf and "peçe" (the niqab veiling the entire face) were replaced by the coat, scarf and shawl, and men began to wear hats, jackets, shirts and ties.

With the industrialization process of the 1960s, women entered the workforce and tailors were substituted by ready-to-wear clothing industries. Today, Turks wear a variety of clothing and styles influenced by tradition, religion and modern culture. The Turkish people are of varied religions and socio-economic classes, and clothing styles and fabric quality is still a good indication of professional occupation and social status. Some women still wear scarves to cover their hair along with maxi skirts, full-length pants or the traditional kaftan. Many older Turks still knit scarves and clothing from yarn or weave fabrics.

Recent trends are encouraging younger generations to learn how to sew and make their own clothes. Enterprising designers are opening up boutique stores and selling Turkish clothing online with great success. Some designers that have been drawing worldwide attention with their works include Rıfat Özbek, Cemil İpekçi, Vural Gökçaylı, Yıldırım Mayruk, Bahar Korçan among many other creative personalities. It goes to show that the Turks have had a great sense of style since the very beginning and will continue to present the world with new fashion for centuries to come.