Lights gleam as the stage is set for Istanbul fashion week 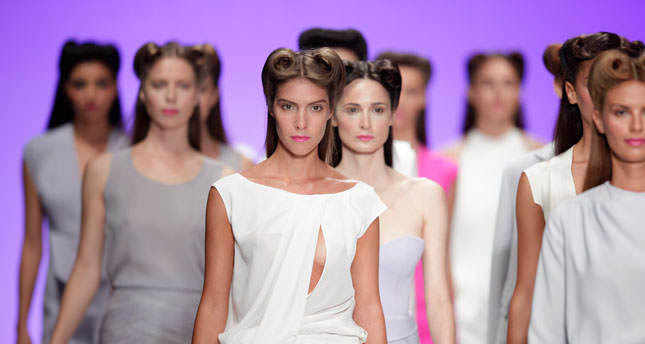 With fashion being one of the hottest topics, it is no surprise that fashion weeks around the world are huge events. Istanbul Fashion Week is one of the leading organizations helping young and talented Turkish designers achieve international recognition

Launched in 2009 as Istanbul Fashion Week, the organization has been held by IMG Doğuş under the name Mercedes-Benz Fashion Week since March 2013. The event, which is held twice a year after the Paris Fashion Week, has already made a name for itself by helping Turkey secure its position in the global fashion industry. This year's MBFWI launched on Oct. 13 and will continue until Oct. 18, and it will also feature an exclusive one-day show titled "In Season" where prominent brands will display their Fall/Winter 2014 collections.This season, 19 designers have chosen Karaköy Antrepo 3 to present their collections while 16 fashion designers will organize their shows accompanied by creative presentations or as mini-shows at Studio; however, as always, there are designers who prefer presenting their collection places elsewhere. Though, many fresh designers choose to hold their fashion shows there, as Studio was created to encourage young and talented designers to present their collections with a relatively small budget. Stand out collections such as Z. by Zeynep Devooght, Benan Bal, Ready to Fish and Ekria + White Posture will bring a fresh breath of air to MBFWI 2014.

Noted Istanbul fashion designer Hatice Gökçe hosted the opening show of the season, which was dominated by casual and comfortable attire. Gökçe, who has not attended fashion weeks for the last four years, debuted her Spring/Summer 2015 men's collection titled "Seyyah" (Wanderer). Inspired by wanderer Evliya Çelebi, Gökçe created her collection with the motto of "time has been always on the side of the wanderer." Well-known designer Deniz Berdan's collection, which criticized the consumer society of the 20th century, made a great impression. She reflected the consumption addiction of our age with 90s trends such as skate punk motifs, plastic shopping bags and color bursts in her DB Berdan collection. Moreover, the show was the most-talked about event of the day with the designer's music choices. Simay Bülbül, whose works focus on leather, stood out with her designs featuring the mixture of leather and tricot as well as the harmony of silky fabrics with ethnic prints. The collection featured laser cut attires and also offered alternatives with loose cut leather pants. Mercedes-Benz chooses one designer and sponsors him or her every year during the fashion week.

This year, the brand chose Hande Çokrak's collection titled "Maid in Love." This year's Istanbul Fashion Week also caused a stir before it began as renowned model Didem Soydan announced she will not take to the runway, claiming that brands and designers offer less money to Turkish models than their foreign colleagues. Models such as Merve Büyüksaraç and Irmak Atuk supported Soydan, and designer Tanju Babacan appeased the models by hiring 13 Turkish models for his collection "Aydınlanma" (Illumination).

MBFWI supports talented people from different fields and proves that it is not just an organization where designers and brands present their collections. Fashion photographer Onur Dağ, who has been taking photos of MBFWI for the last two seasons, is one of the artists the organization is backing this year. He gathered all the backstage photos he took during previous MBFWI events in a book entitled "Backstage Entrance." His second book "Backstage Entrance 2" was launched recently at the Fashion Week Kick Off Party, which was curated by Ceyda Balaban. Fashion lovers who want to attend the shows should bear in mind that some designers present invitations to their shows as a gift via their social media accounts or the brands in which they collaborate. The shows last approximately 10 to 15 minutes, and 700 guests often view a show. Mini-shows and presentations taking place at Studio welcome approximately 250 guests at a time.

"Pop-Up Bazaar Souq," which will change the way people shop, is also opening today and will stay open until Oct. 19 in Karaköy. Souq Karaköy will bring vintage clothes, designers and brands together during the three-day event. The renowned designer Ümit Benan will set up a sample sale for the first time in Turkey, and other participants in the open-air bazaar will include Ece Sükan Vintage Pop Up, Zadig & Voltaire, Mehry Mu, Monşer Vintage, Ece Ajandası, Vesaire and Magnolia.