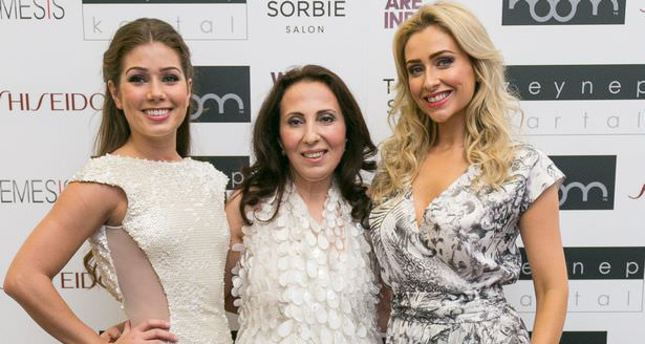 by AA Nov 18, 2014 12:00 am
Zeynep Kartal is one of the most famous Turkish fashion designers worldwide. From her studio in the heart of Manchester, where she has been living for nine years, Zeynep Kartal has designed clothes for various celebrities, such as singer Cheryl Cole, and the wives of famous footballers like Coleen Rooney, English striker Wayne Rooney's significant other. Despite having gained considerable recognition in the U.K. and all over Europe, Zeynep Kartal has not forgotten her Turkish roots, as she returns to her homeland to plan two charity fashion shows - one in the cosmopolitan city and another in her hometown of Konya, both in April 2015. This will mark the first time that she will present a new collection in Turkey. "I am really excited about my fashion show in Turkey, especially because it will benefit my country and my hometown," she tells The Anadolu Agency. The revenue from the shows will serve as aid for destitute children, Kartal says, adding she also cooperated with Turkey's Ministry of Family and Social Policies for the project. To many, becoming a fashion designer when coming from the city of Konya, which has a reputation for being conservative, would appear to be far from a foregone conclusion. But Kartal says people misjudge the city. Konya is a modern city where there is "good potential," she says.

"This is another reason why I am having a fashion show in my hometown: to prove that most people in Konya are quite well educated and bright," she says. Her passion for designing came early. "I have always had a passion for designing beautiful clothes. When I was only 10, I attended a local sewing class with my older sister and my aunts. I received a symbolic award for my skills," she recalls. With the support of her family, she was determined to become a stylist. "Twenty-five years ago today, people in Turkey did not know what a stylist did exactly. But I was determined and I studied fashion designing to make a career in Turkey," she says. But, for personal reasons, she moved to England nine years ago with her husband and her two sons. In order to improve her English, she attended classes in fashion design. Recognition in the U.K. came quickly... quicker than expected. "I was very well received across England, with my brand 'Zeynep Kartal' gaining recognition from many celebrities even though it was quite new," says the Turkish designer. For two years in a row, she attended the London Fashion Week where some of the world's leading designing trends are showcased. Through her outfits, Zeynep Kartal wishes to make "women's feelings, ideas, and dreams come true." She has chosen to incorporate traditional Turkish motifs into her designs. "My whole collection is a combination of silk and embroidery, both of which make women feel special," the Turkish designer said. "Silk is evocative of femininity, and is what helps women meet on a common ground." Her outfits regularly appear in European magazines such as Marie Claire, Vogue, or Hello. Kartal is also known for running fashion shows for charity purposes. Among them, a show organized for a David Beckham charity to help 19-year old Kirsty Howard who suffers from "Situs ambiguous" (the abnormal arrangement of organs and vessels). The fashion designer has never forgotten that she is a Turkish Muslim woman, she says, adding she also stressed it very often to the English-speaking media, who insistently describe her as a "British designer" (She has British nationality). Turkey has quite a lot of successful designers, both men and women, Kartal says. "Maybe, they are not brave enough, or they have some obstacles which prevent them to be known world-wide. But, Turkey is really good at fashion and designing. There is almost no difference from Europe."