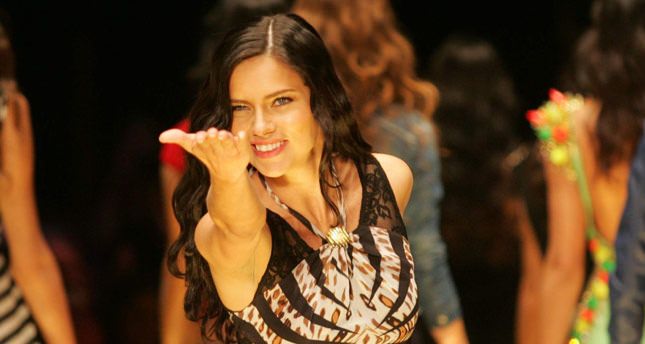 by Daily Sabah Jan 09, 2015 12:00 am
The 19th Dosso Dossi Fashion Show kicked off today with a catwalk show featuring American model Lindsay Ellingson at Antalya Expo Center. Speaking at a press conference prior to the meeting, Dosso Dossi Fashion Show chairman of the board, Hikmet Eraslan, said Turkish textile products, especially ready-made clothing, will be sold to buyers attending the show from 200 different cities in 30 countries. The show is held in January and June, and attendees can take a break in the Mediterranean city of Antalya, even though they are on a business trip. Eraslan said in 2005, the show was organized with the participation of 11 companies and 45 participants, however the number of companies has now reached 150 with over 5,000 attendees.

Eraslan stated the ruble's recent depreciation has been mostly due to the crisis in Russia. To assist Russian and Ukrainian buyers, the minimum purchase guarantee ($15,000) was canceled for this edition. "I believe Russian and Ukrainian buyers can buy more products as the minimum purchase limit was lifted. This year, we are waiting for almost 8,000 buyers and it will give momentum to the Turkish ready-made clothing industry which is suffering from recession," Eraslan said. So far, the show has hosted famous top models such as Isabeli Fontana, Erin Heatherton, Adriana Lima, Miranda Kerr and Irina Shayk, all of whom have contributed to Turkey's promotion abroad. This year, the show is taking its place on the podium with an Italian coastal town, Portofino, as the theme. "Many celebrities flock to Portofino, famous for its artists and cafes. The show's team features 40 top models," he concluded.

Officials of the organization announced the contract with Brazilian model Alessandra Ambrosio was annulled and her attendance was cancelled due to her "inconsiderate behavior."