Highs and lows in fashion from the Golden Globes 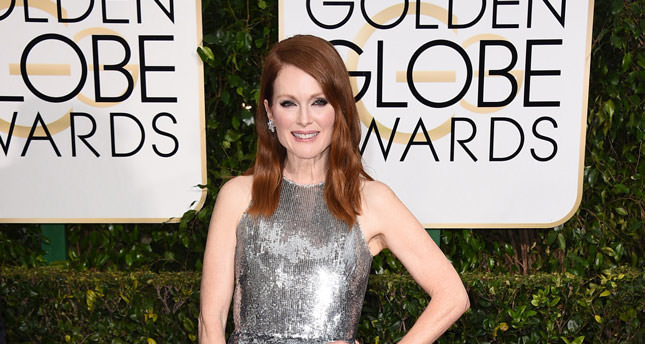 by Jan 13, 2015 12:00 am
With lots of easy breezy makeup, minimal jewelry and loose hair, the Golden Globes opened the awards season with a red carpet chock-full of sparkly metallics, bright whites and dramatic reds.

Among those lauded by fashion pros Sunday night at the Beverly Hills, California, awards night was Julianne Moore as she led a parade of silver in custom Givenchy Haute Couture by Riccardo Tisci. Her sequins faded to black and a cascade of feathers at the bottom.

"For me she was it. She looked amazing, but the metallic trend was debated all over social media. A lot of people see it as very flashy but ı think it looks great because it's just a new, totally different texture and something that's more interesting than just the same old strapless gowns," said Eric Wilson, fashion news director for ınStyle magazine.

Style and beauty expert Mary Alice Stephenson agreed, adding Emma Stone's sparkly silver-and-black Lanvin jumpsuit to her top five. ıt had a big floor-length sash at the waist, after all.

"Emma Stone broke a lot of rules and that's what Golden Globes fashion is about. ıt was this great respite from all the boring gowns. And her hair was down. It was superglamorous and a little bit edgy," she said.

Extending last year's red trend was standout Viola Davis in Donna Karan Atelier. Her sisters in sultry red included Allison Williams, Lena Dunham and Helen Mirren. And there was plenty for us to love or hate, including a daring white Vera Wang Collection gown for "Gone Girl" co-star Rosamund Pike. She showed off midriff cutouts, a strappy barely there back and plunging neckline soon after giving birth.

The look was criticized by some as ill-fitting at the top but lauded by Aya Kanai, executive fashion director of Cosmopolitan and Seventeen, as "white hot and sexy." A chartreuse Gucci column gown worn by Naomi Watts with a knockout diamond Bulgari Serpenti necklace was a questionable color to others while she was lauded as a vision by Joyann King, editor of HarpersBazaar.com.

Ruth Wilson of "The Affair" stood alone in green, an edgy form-fitting Prada with a high neck and black-and-turquoise detailing.

Other highs and lows:

JESSICA CHASTAIN: The "A Most Violent Year" actress said it best of her ultra-shiny, plunging Atelier Versace: "My movie is about heating oil. It's like an oil slick so ı was, like, it's perfect."

"To glove or not to glove," laughed Stephenson. "ıt was a big moment. People had high expectations for what she was going to wear. ı think the gloves were ill-fitting. Her hair was down and she had that train coming off the Dior dress and the long earrings. ıt could have been a modern Audrey Hepburn moment but it wasn't."

KEIRA KNIGHTLEY: She did not get the let's-flaunt-our-baby-bumps memo, showing up pregnant in a pale blue Chanel with a bib neck, tiers of ruffles at the bottom and appliques of butterflies and feathers.

"That was not a best-dressed baby bump," Stephenson said. "ıt was a little too "Little House on the Prairie."