Wedding dress made from silkworm cocoons 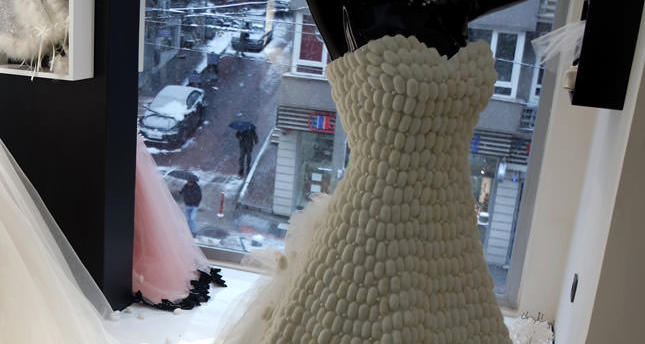 by AA Jan 13, 2015 12:00 am
The wedding dress designer, Ece Kaytan, will donate a 16-meter-long wedding dress, which she created from 2,015 silkworm cocoons at a cost of 16,000 euros, to Bursa City Museum, although many people have made offers to buy the dress.

Speaking to Anadolu Agency, Kaytan said that she began working as a wedding dress designer after receiving her degree from Faruk Saraç Design Vocational College.

Kaytan, who made the dress with a team of four tailors in three months, said the 2,015 cocoons used in the dress symbolizes the year in which she began her fashion career. "Moreover, we made the dress 16-meters long as Bursa's license number is 16," she explained, adding they used silkworm cocoons, as it is the best material with which to introduce Bursa to the fashion world.

The designer sewed or glued the cocoons onto the dress after first shaping them, and displays this wedding dress in her shop's window. Although many have offered to buy the dress, Kaytan said it has sentimental value. "I believe that the soul of this dress is best preserved at the museum, so I decided to donate it to Bursa City Museum," she said.

Admitting that she has received many positive comments on her dress, Kaytan said that people compliment her, particularly because she used a particular technique that utilizes the silkworm cocoon itself, an art that is almost forgotten in the region. Kaytan said she will deliver the dress as soon as possible and added that museum officials have started to build a display section for the dress.