Autumn fashion on the Paris catwalk looks dark and leggy 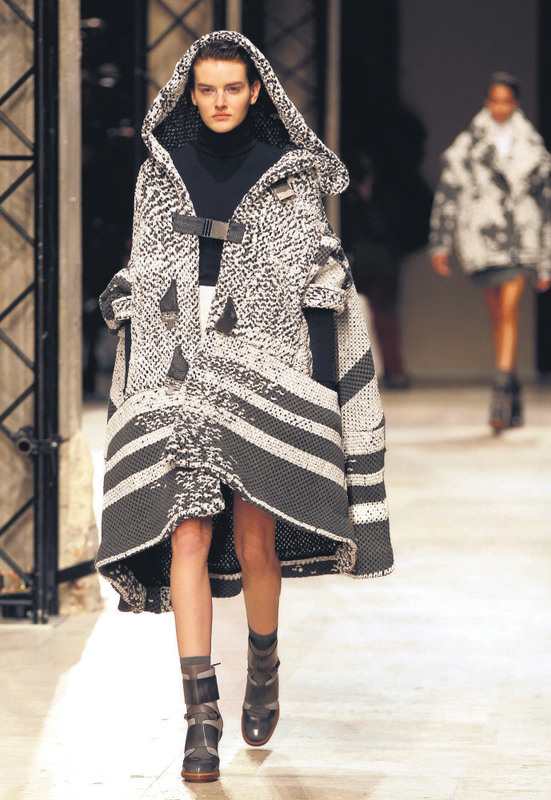 by Compiled from Wire Services Mar 09, 2015 12:00 am
While most of the northern hemisphere is eagerly awaiting spring and summer, on the Paris catwalks it's already about the following autumn and winter with a forecast of dark and leggyDark and leggy is the predominant look unfurled by some of the top brands including Dior, Kenzo, Lanvin, Balenciaga and Nina Ricci during the Paris Fashion Week. Givenchy, Stella McCartney, Hermes, Chanel, Valentino and Louis Vuitton were expected to confirm the trend before the event wraps up on Wednesday. If you're looking to capture the essence of what the major stylists are getting at, a black outfit with a thigh-length jacket, or short, perhaps cinched, dress with a belt worn over pants or bare legs and black half boots will do the trick. Gloves are also in – again, preferably black and long and holding one of the smaller handbags from the elite labels. Alexandre Vauthier, Dior, Dries Van Noten, Guy Laroche, Lanvin and Maison Margiela all pushed that aesthetic in their collections. But, of course, black isn't the color for all occasions or tastes. And so Balmain brought out some cheerful oranges and yellows, Issey Miyake offered loose-fitting fall colors like khaki and blue and Loewe seemed to be determined to carry beach-friendly pastels into the coldest months.

This season's mantra is: Pile it all on. We've seen it notably at Lanvin, Dries Van Noten and now at Kenzo's draped, voluminous and colorful fashion spectacle. It takes a lot to drag fashionistas out early on a Sunday morning to a venue on the outskirts of the city. But Kenzo rewarded those who did by feeding them tasty delights and treating them to an incredibly energetic presentation, in which gigantic rectangular mirrored walls moved behind models in the warehouse venue. The collection continued this energy with its vivid splashes of kinetic graphic lines and flashes of contrasting, colored prints. But fall-winter was all about the layering. Geometric lines featured on layered A-line column dresses, topped off with funky asymmetrical poncho-hoods. One billowing printed look featured a play on jarring prints – the skirt looking eastern, the leopard print top, western.

Kenzo is all about cultural fusion. The dark looks featured a nice play of camouflage print on a poncho and assorted jungle pants: If you looked closely, you realized the pattern was, in fact, of very non-militaristic flowers. It was also tongue-in-cheek and is bound to be a hit.

Designer Phoebe Philo riffed on the theme of undoing, undressing and unbuttoning in a highly creative collection that ended up being more chic than provocative. The Celine woman is, after all, no show-off. Inner pocket straps were exposed on the torso, one in beautiful burnt orange, with its belt flapping down, undone. A loose and stylish cream minimalist poncho sweater looked like the model was caught trying to take it off, with one arm in and the other out, and the neck-hole skewed to the side. A cream shawl with a russet band was wrapped haphazardly around the body, as if ready to fall off onto the floor. Half-unbuttoned, loosely-structured floral shirts were accessorized with multiple huge, abstracted fur cuffs held together by the normally-invisible string that goes inside the coat. The later sections included a beautiful play on triple colors like one loose, silk ankle-length dress in deep blue, white and red. Only a designer like Philo can make a collection this "quirky" ooze style. Eighteen-year-old singer Lorde led the VIP pack at Chloe, inside the Grand Palais, where Paris' spring sun beamed through the venue's glass ceiling. It was a beautiful touch that nicely set off the collection designed by Clare Waight Keller. It was on-trend menswear and boho looks in vogue this season, with, for the most part, long-line loose flowing silhouettes. A long, militaristic pea coat with huge lapels and gold buttons set the show going, fusing into a sumptuous Sherlock Holmes-style cape coat in gray, a double breasted peaked jacket in gray check wool or a scooped boyish waistcoat. The bohemian looks include a long diaphanous silk crepe dress in purple, twinned with a long thin black neck scarf. It was a safe collection with very eclectic proportions. Celebrity endorsement is a mighty mover to sell high-end clothes to the public, and there was no lack of star power at the Paris shows. What were the brighter fashion flames attracting these mediatized moths? Kim Kardashian lent her aura to Lanvin and Balmain – an appearance made all the brighter by the reality TV star's transformation from brunette to platinum blonde. At Balenciaga, Lady Gaga made the photographers' shutters click to a crescendo with her presence. Dakota Johnson, star of the erotic melodrama "50 Shades of Grey," flashed her blue eyes at Dior. And British designer Vivienne Westwood, who eschewed all the rules to present a raucous show replete with male models in "unisex" drag, attracted Solange Knowles and Bond girl Naomie Harris to her front row.

Real life doesn't have a backing track unless you've got earbuds tucked in all the time. However, the fashion shows do, and music is a big part of the spectacle. Probably the most high-profile bit of musicking was from Kanye West, Kardashian's rapper husband, who announced in the middle of Paris Fashion Week that he was doing four charity concert performances in the city featuring some tunes from his new album. Others bringing live performance to the stage included Westwood, who founded a punk band to channel Sex Pistol-style anarchy at her liberated show. At Kenzo, stylist duo Humberto Leon and Carol Lim enlisted a British synthe-pop band, Saint Etienne, for their event. "Carol and I met when we were 18 listening to Saint Etienne, so we're so excited that they came and composed two new songs for us," Leon told reporters after the show on Sunday.
Last Update: Mar 09, 2015 10:11 pm
RELATED TOPICS