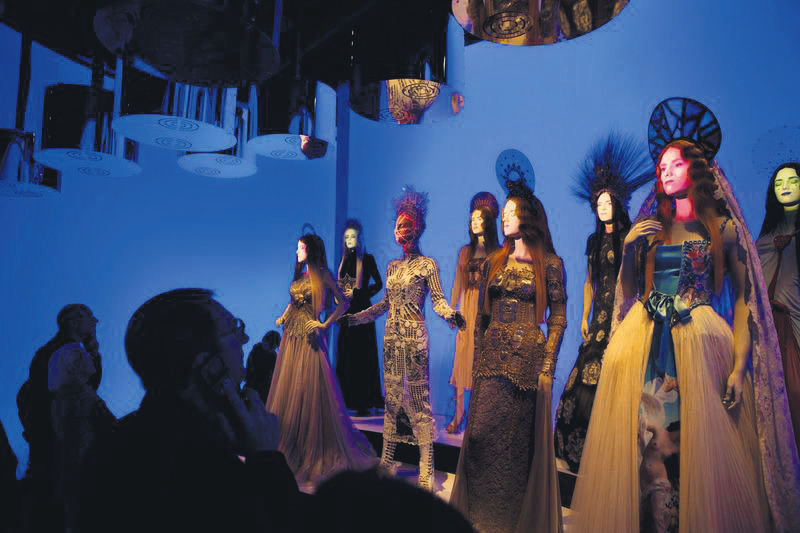 by reuters Apr 03, 2015 12:00 am
Paris' first ever exhibition devoted to fashion's "enfant terrible" Jean-Paul Gaultier opens its doors on Wednesday, showcasing the French couturier's avant-garde creations as well as his childhood inspirations. The Grand Palais Museum will display more than 300 pieces, made up of haute couture and ready-to-wear designs from between 1976 and the present day, accompanied by videos and pictures.

"The Fashion World of Jean-Paul Gaultier: From the Sidewalk to the Catwalk", which runs to Aug. 3, also has mannequins with animated faces winking at passers-by.

Gaultier, who designed the corset and cone bra that Madonna wore for her 1990 world tour, said the exhibition was not a retrospective but a creation in itself. "I tried to display them by theme, themes that are important to me like working on skin, tattoos, piercing etc. androgenicity, the strong woman, the sexy woman as well, corsets, ethnicities," he told a news conference on Monday.

Designs, sketches, stage costumes, film footage as well as his old teddy bear are all on display, illustrating his journey from a creative childhood to world-renowned couturier. "I was lucky that my grandmother was different, that she had black feathers, an extraordinary corset and also she gave beauty advice to her clients ... I was there and I witnessed this, I was probably 9 or 10 years old," he said. The exhibition has already shown in other locations, such as New York and Melbourne, but it stops for the first time in fashion capital Paris, where Gaultier shows his designs on the catwalk.

"It's like the return of the 'enfant terrible' in Paris," Thierry-Maxime Loriot, curator of the Montreal Museum of Fine Arts where the exhibition first opened in 2011, said, adding it had an important social message.

"You can see it through the exhibition with the mannequins, that speak, that reflect his universe but also the different skin tones and different body shapes throughout the exhibition."

Gaultier announced in September he was quitting ready-to-wear, focusing instead on haute couture, industry collaborations and perfume.
Last Update: Apr 03, 2015 2:16 am
RELATED TOPICS