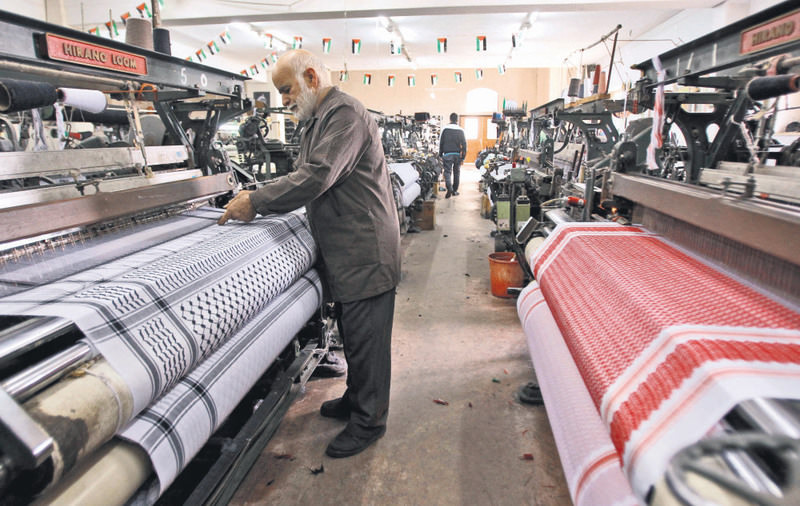 by French Press Agency - AFP Apr 24, 2015 12:00 am
With strong competition from China, the traditional, locally produced Palestinian scarf, "keffiyeh", has put up a show of resistance, successfully pulling itself back from the brink of extinction.

Thanks to the business sense of two brothers from the southern West Bank city of Hebron, the traditional black-and-white scarf has found a new lease of life.

In 1961 their father, Yasser Hirbawi, who sold keffiyehs he brought from Syria and Jordan, decided to set up his own production line.

Today, his sons are at the head of a business that employs 15 people and exports keffiyehs worldwide, all of them bearing: Made in Palestine.

Paradoxically, it was the British who turned the keffiyeh into a widespread symbol of resistance during the time of Palestine under their mandate, said Abdelaziz al-Karaki, 61, who has spent more than four decades working in the Hirbawi factory.

But the keffiyeh's appearance on the international scene can be put down to the influence Yasser Arafat, the late Palestinian Liberation Organization (PLO) leader and icon of the resistance who was hardly ever pictured without his trademark scarf.

Thanks to him, the scarf was pictured at the U.N., on the White House lawn and in Oslo when Arafat was jointly awarded the Nobel Peace Prize along with former Israeli President Shimon Peres and the late Israeli Prime Minister Yitzhak Rabin for their Middle East peace efforts.

"Arafat used to offer a keffiyeh to all his distinguished visitors and today, keffiyehs from our factory are still offered by his successor Mahmud Abbas," said Juda, speaking over the roar of the looms, which are now automated.

At the start of the last decade, with strong competition from China and India, which were selling keffiyehs at a third of the price, he decided to shut down the factory.

It was a tough decision for a family whose production line had lived through decades of conflict, the first Palestinian uprising and had survived the rigors of daily life in the Israeli-occupied territory.

Although the factory was closed for five years, it gave them time to come up with a new strategy.

"We could never beat them on price, so we decided to focus all our efforts on quality," Juda said. As well as quality, they have had to adapt the keffiyeh to international demands.

"Foreigners want different colors so we have had to revisit the traditional style," he said.

From turquoise and steely blue, to pearl grey and lemon yellow, these days the keffiyeh comes in all hues and shades.

And it is not only used as a scarf. It can be worn as a tunic, reworked as a shoulder bag or transformed into pockets.

Whether it is dancers on TV, U.S. rappers filming a video or Palestinians competing in the Arab Idol talent show, they are all wearing the scarf.
Last Update: Apr 24, 2015 11:55 pm
RELATED TOPICS