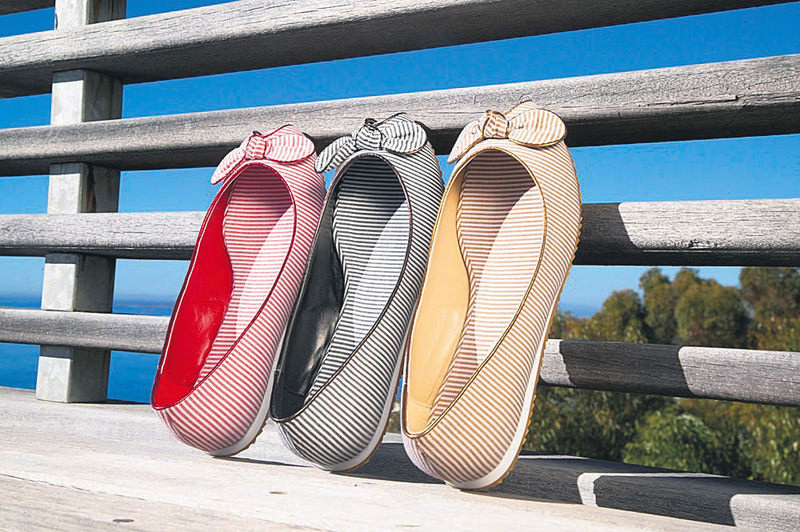 by May 10, 2015 12:00 am
A great change in fashion has taken hold: After years of wearing high heels, fashion-conscious women can now wear flats without feeling awkward.

In this northern spring and summer, there is a big choice on offer.

"Shoes are becoming quite sporty and radiate ease of wear," says Claudia Schulz of the German Association of the Footwear and Leather Goods Industry in Offenbach.

Slip-ons will be often seen, experts say unanimously. They look like sneakers, but have straps instead of laces.

"Slip-ons are perfect when you're on your feet a lot or travelling," says Schulz.

Even airier are espadrilles. The shoes are made from linen or cotton and have thin, often plaited soles.

"In high summer when it's really hot outside, they'll take over from slip-ons," predicts Schulz.

The smarter equivalent of the slip-on and the espadrille is the loafer.

"This year it's cut quite wide, but pointed at the end," says Ines Meyrose, a fashion advisor from Hamburg. That way the leg appears longer.

"Loafers and slip-ons can be combined well with skirts and dresses," she says.

Women who want to wear flat shoes with trousers are better off pairing them with more tailored legs, she adds.

New sneaker models are often brightly coloured. "But at the same time, quite simple models are also in fashion," says Schulz. "They're reminiscent of tennis shoes, and appear almost sculptural."

Despite all this sportiness, high heels have not completely disappeared: wedge heels and block-heeled sandals with their thick soles are celebrating a little comeback.

"They're taking the 1970s look back onto the street," says Silke Gerloff, a fashion advisor and personal shopper from Offenbach.

Otherwise, holes are also in fashion: airy cut-outs around the whole shoe - from the tip of the toes to the ankles - could be seen at almost every fashion show recently.

"Shoes are really taking advantage of the mix this summer," says Gerloff.

"Different materials are being combined and complemented with bright patterns, prints and decorations like fringes, beads and straps."

The T-strap is the most common of the straps, she adds. The thin band runs along the top of the foot and then encircles the ankle.

Ankle straps and so-called Roman sandals, where the straps come all the way up to the knee, are also in fashion this summer.

They're usually made of leather, especially suede. "It looks casual but can also be worn with a suit."

Another stylish alternative is the so-called monk shoe, which has a buckle and strap instead of laces. Slip-ons and loafers will also be seen on men.