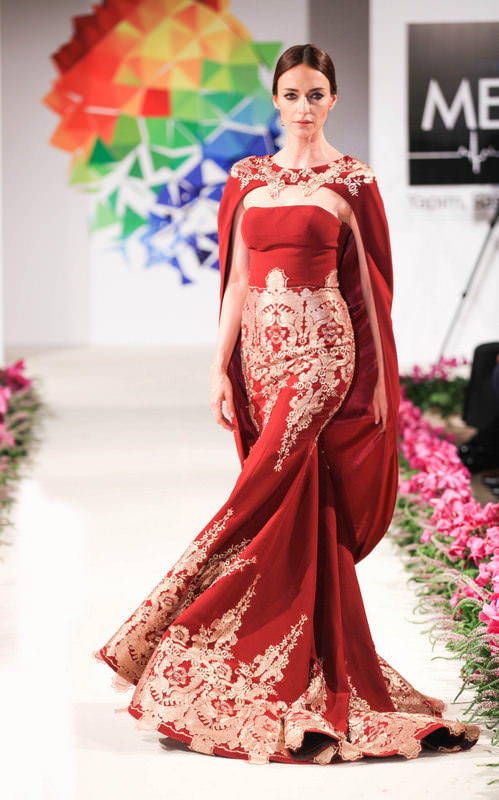 by Daily Sabah May 26, 2015 12:00 am
Organized by Medyadoktoru Productions with the support of the Prime Ministry Promotion Fund, the "Şehr-i Medeniyet Istanbul" (Istanbul: The City of Civilization) fashion show, which introduces modern interpretations of Ottoman-era daily attire, is being held today at the Hilton Garden Inn in Istanbul. Fashion designer Gülnur Güneş is attending the event with her designs while the show was choreographed by Asil Çağıl and hosted by TV and movie stars Elif Tayhan and Kerem Baydar.

As the show's lead model, Özge Ulusoy appears in unique designs with an Ottoman flavor.According producer Savaş Uğurlu, one of Turkey's important music groups, the Ottoman Choir, conducted by Yılmaz Özfırat, is also expected to perform Ottoman-era songs during the show. He said the fashion show interprets the past Ottoman culture in a modern way and helps today's youth remember the past historical culture. "The designs are a kind of artwork," Uğurlu said. In addition to the Prime Ministry Promotion Fund, the fashion show is supported by Kaptan International Textiles, which provided the necessary fabric; Malatya Pazarı; Zeyn Decoration; Inter Press and the Eyüp Municipality.

Güneş prepared 20 special costumes for the show, working day and night with her team. She said she hopes the show might create new fashion trends. "We should look at the fashion show as a whole. It is important to properly understand and interpret nostalgia. We are trying to create a common language by combining nostalgia with cultural perspective to attract the attention of those who do not know much about Ottoman culture as well as others who are interested in fashion," she said.

Güneş added that each costume represents a different city. "Today, leading fashion countries like France and the U.K. significantly benefit from their past. We portray this in fashion shows and movies," she said. Güneş said Turkey has similar potential in the fashion industry, but should look further. "We have unfortunately lost our traditional fashion. Our aim is to protect our past," she said.
Last Update: May 26, 2015 11:20 pm
RELATED TOPICS