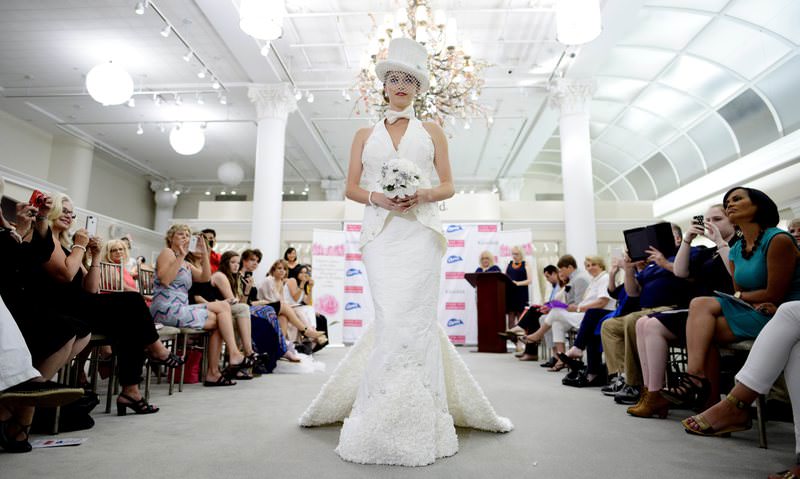 The toilet paper dresses were exactly like traditional wedding dresses with their long trains, full layered skirts, floral appliques, ruffles and sparkling bodices. They did not fall short on the designing element either-their impeccable detail work was no different than designer gowns made out of silk and lace.

Ten designers vying for a $10,000 prize painstakingly putting them together from the most basic materials.

The rules were simple, contest co-creator Laura Gawne told Reuters. "They have to use Charmin toilet paper, any kind of tape, any kind of glue and they can use needle and thread," she said.

"No closures, no Velcro, nothing. No attachment of fabric, nothing," said her co-creator, Susan Bain.

The sisters Bain and Gawne began the competition to promote their wedding site. The contest, now in its 11th edition, is held in conjunction with toilet paper brand Charmin.

This year, it was held at bridal store Kleinfeld, which will turn the winning dress into a ready-to-wear gown.

Before the show began, designers applied the final touches as models held onto toilet rolls needed for the add-ons.

"We have 4,585 petals that were all hand-cut and traced," Carol Touchstone, who came in third place, said of her floral dress. "We used tape, glue and Charmin."

The winner was a tuxedo-style halter neck dress with a removable jacket, accessorised with a top hat and bow tie, by Donna Pope Vincler. She said it took her about three months, 22 rolls and lots of tape and glue to make.

"It's amazing how strong glue and toilet paper can be. After I made it I was hitting on it like a drum ... it's very sturdy," she said. "I don't even know how many layers (there are)- I just did it until I thought it would stay together."

It is not surprising that non-traditional wedding dresses are on the rise. Vera Wang had showcased a black wedding gown as part of her Fall 2012 collection and just in 2013 Kaley Cuoco Sweeting had chosen a pink wedding dress when she tied the knot with Ryan Sweeting.
RELATED TOPICS