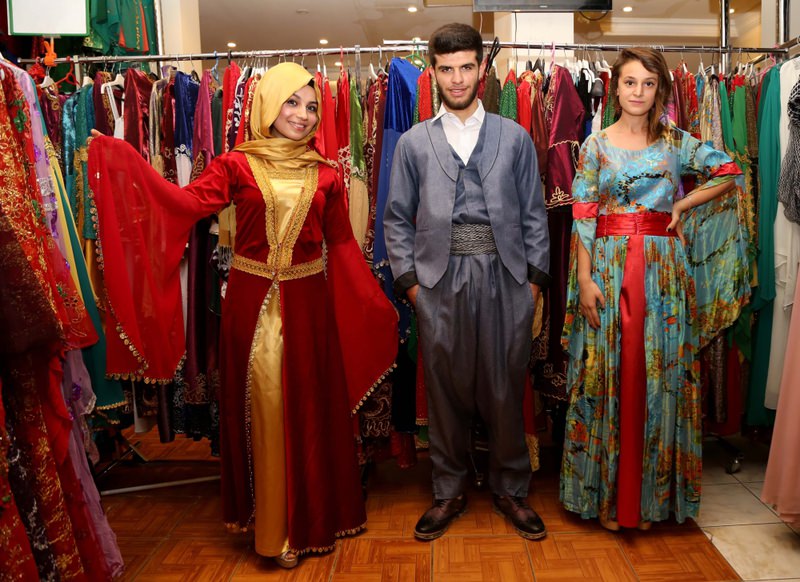 by Anadolu Agency Sep 01, 2015 12:00 am
Local clothes from the southeastern Anatolian region that are mostly worn by locals during festivals, special days and weddings are being exported to the U.S, Germany, France, Norway and Portugal.

Traditional local clothes, "bindallı" for children, "fistan" for women and "şal şapik" for men, are the main clothes worn by locals in the region. A workshop began to export these clothes to Europe and the U.S. after a successful promotional campaign.

The manager of the Diyarbakır-based workshop Mehmet Kaymak told Anadolu Agency that they decided to export these clothes in order to keep the local culture alive in Europe and the U.S. He said the clothes are in demand as a good number of Turkish people live in Europe and the U.S., adding they also send these local clothes to Germany, France, Norway and Portugal. "We are doing the job with love. We want to keep this culture and tradition alive around the world," Kaymak said.

"When people wear our local costumes in weddings and special days in Germany, France and the U.S., other people get really curious and wonder where these clothes are made. We are trying to introduce the local clothes of the southeast Anatolia region to Europe. Hence, we are contributing to tourism and trying to keep our traditions alive," Kaymak added.

He said Turkish and Kurdish people living in Europe value their local clothes and yearn to stay in touch with their tradition as they live abroad. Kaymak also expressed his happiness for being able to send these clothes to those who want them.

Kaymak's workshop receives orders for 200 clothes every month. The cost of the local clothes varies from 50 euros to 400 euros and customers mostly demand the local clothes from the Şırnak, Hakkari and Diyarbakır regions.

Nadide Pehlivan, the co-owner and designer of the workshop, said they do not only export these clothes for financial profit but to promote the traditions of the region.

"We are promoting our products on the Internet. We are very happy to introduce the local clothes of southeast Anatolia and Turkey abroad," said Pehlivan, adding they contribute to Turkey's economy.
RELATED TOPICS