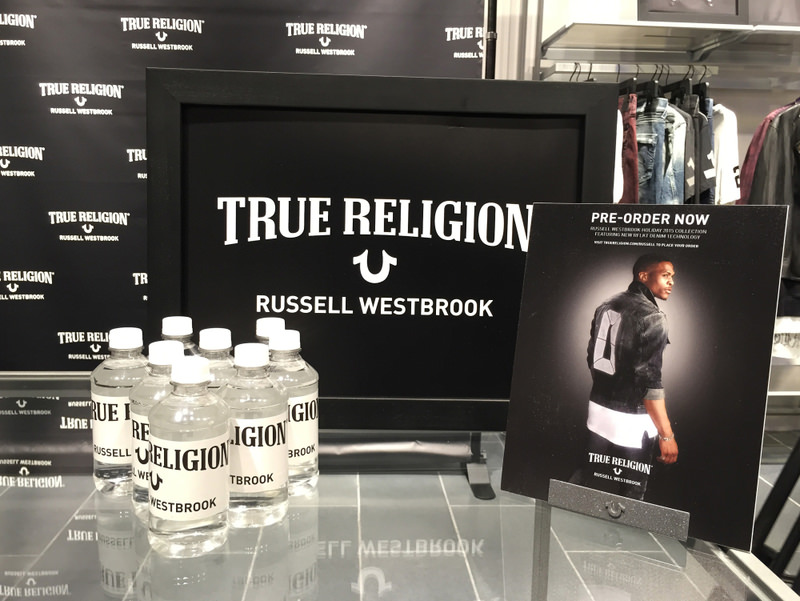 NBA star and fashion trendsetter Russell Westbrook wants to help you get dressed for the holidays.

"It's a blessing. I think when you get that title of being creative director some people take it for granted, and people in the fashion world truly understand what that means and for me that's a huge step, and something I'm trying to do in the long run," Westbrook said in an interview at the True Religion store in the Soho district of Manhattan.

Westbrook, the Oklahoma City Thunder player who launched a line at Barney's last year, said at True Religion, "my job is to come in with some more street style, different things that I see on a day-to-day basis from my peers."

In comparison to his Westbrook-XO-Barneys New York collection, Westbrook says the True collection is "more me coming up and kind of doing my own thing."

Pieces from the line included a trendy leather jacket, washed out denim shirts and oversized T-shirts.

Fans stood outside the New York store waiting for the celebrity who has attended shows during Fashion Week and cheered once he arrived. Outside of sports, Westbrook's colorful style has made headlines, and he's become a staple on the fashion scene, visiting fashion week in Paris and Milan.

"Growing up, I would never think I would be doing anything like this, in a store like this, so it's a blessing to be able to see all different kids and parents and everybody here so it's good," he said.

Westbrook is also celebrating in his personal life: He married his college sweetheart last month.

"It's a great, major experience. Still living that moment, so it's still great," he said, smiling excitedly.

Joseph Altuzarra decided to go back to his Basque roots for his new spring collection, conveying a casual, sun-kissed, beach-ready feel with lots of linen, lots of white, some shiny mother-of-pearl, and espadrilles for the feet.

Altuzarra showed his wares late Saturday at a packed runway show in downtown Manhattan with actresses Anna Kendrick and Michelle Monaghan in attendance, as well as Vogue editor Anna Wintour.

Explaining that he was "inspired by the inherent beauty of the materials and crafts of the region, and the ease and humility it exuded," Altuzarra clearly favored a lived-in look, with wrinkled linen dresses and tops. Besides white, colors included a summery orange, a royal blue and a deep green, which worked beautifully on a hand-dyed crepe de chine asymmetrical dress.

For some sparkle, the designer added dresses and tops embroidered with mother-of-pearl, and his fancier dresses featured beading and colorful embroidery. And for those times when something heavier is called for, his tobacco-colored alligator wrap vest and wrap coat were clear highlights of the show.

Kendrick, who's in New York on her way to the Toronto ınternational Film Festival, pronounced herself a new Altuzarra fan.

"It was absolutely amazing," said the "Pitch Perfect" star. "Some of his blazers were absolutely stunning. I feel that I never really get to wear runway pieces that are casual because when I am wearing a designer piece, I'm usually on a red carpet. But I am hoping to find an excuse to wear some of those from today, because they were absolutely gorgeous."

On a dystopian set with One World Trade Center beaming its blue light into the night sky this Sept. 11, Givenchy took Manhattan on a pier before a star-studded crowd, remembering tragedy and celebrating fashion at the same time.

There was lace, there were sheers and there were tuxedo jackets for both men and women.

Givenchy chose New York Fashion Week rather than its usual Paris this season to mark the opening of its new store in the city, along Madison Avenue where it last lived in the city in 2006.

Fan Kim Kardashian, who showed off her baby bump in sheer black, was in the audience with husband Kanye West. They were joined, among others, by Julia Roberts in a T-shirt adorned with Tisci's face, Uma Thurman, Christina Ricci, Margot Robbie and Nicki Minaj, who was in a body-hugging animal print dress. Also there were athletes Amar'e Stoudemire, Victor Cruz and Russell Westbrook (showing his own fashion line this season), and father-daughter Steven and Liv Tyler.