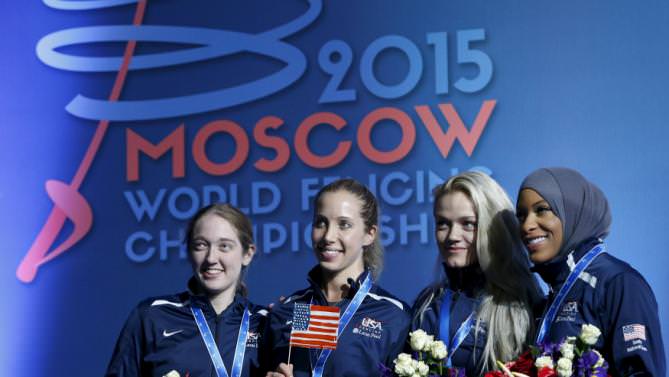 Bronze medals winners in the women's team sabre competition pose for a picture at the World Fencing Championships in Moscow, Russia, July 17, 2015 (Reuters Photo)
by Daily Sabah Feb 03, 2016 12:00 am
Ibtihaj Muhammad, who made the headlines for becoming the first Muslim woman to compete for the United States in fencing, is expected to set a new record by becoming the first American athlete to compete at the Olympics wearing a headscarf.

The 30-year-old athlete has qualified for the Olympics after she won the bronze medal at Women's Saber World Cup in Athens, Greece.

She said that she wants to compete in the Olympics representing the U.S. to show that race, religion or gender should not be obstacles on the path to reaching one's goals.

"I want to set an example that anything is possible with perseverance" she said.

Having been fencing since the age of 13, Muhammad initially started the sport for its fully covered uniform, which she would not have to alter to fit Islamic dress requirements.

She has reportedly said that fencing has historically been reserved for 'white people with money,' which is 'not a good representation of the U.S. society.'

Besides fencing, she also runs her own clothing line 'Louella' with her siblings.

The Los Angeles-based brand offers modest choices through online business and says 'Through Louella, every day is a fashion show and the world is your runway.'