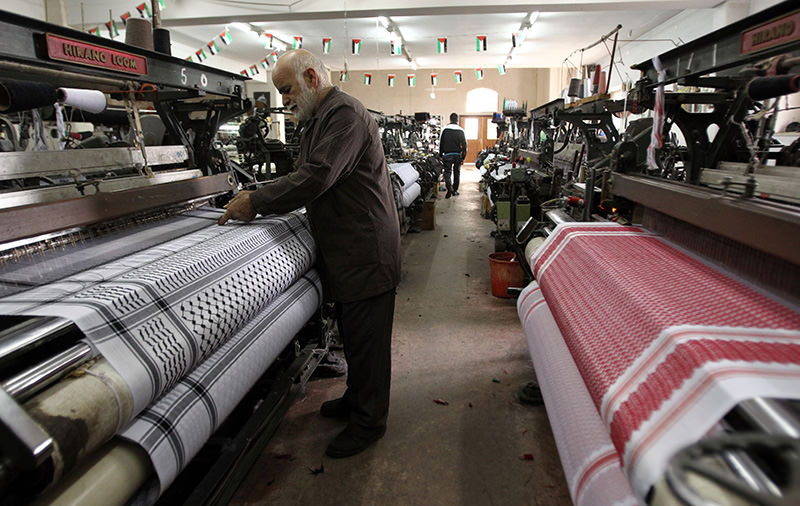 alestinian Yasser Al-Hirbawi, the owner of the Palestinian factory which locally produces traditional black-and-white keffiyeh headscarf (AFP Photo)
by Daily Sabah Feb 03, 2016 12:00 am
An Israeli fashion designer, Dodo Bar Or, has launched a new women's line using the patterns of the keffiyeh, famous for representing the Palestinian struggle, causing a controversy over the applicability of political symbols in fashion.

Keffiyeh, known as 'puşi' in Turkish or also as 'desmal' in Kurdish, is a traditional scarf-a-like headdress used by Middle Eastern people, including Arabs, Kurds and Persians, and it is typically made of cotton. It comes in black and white, but also in red and white, checkered shape patterns.

Meanwhile, in other parts of the Middle East it was also used for non-political needs, in addition to traditional wear, for instance, as protection from the sun while working in the fields of southeastern Turkey.

In recent years, it has also been used in the western world as a fashion piece, adding an edginess to men or women's styles.

In a recent article on Mondoweis, the author Phillip Weiss said Dodo Bar Or's 'eroticize the keffiyeh' and added, "I can't imagine Dodo Bar Or is considering the sentiments of 20 percent of the Israeli population, let alone the millions under occupation a few miles away. Many are sure to be offended by these clothes."

While there has been criticism against using political symbols in fashion lines as people have attached heavy meanings on them, some Palestinian have also said that it is not something that is insulting or causes an offense for Palestinians.

Similar to the keffiyeh line by the Israeli fashion designer, Swedish fashion retailer H&M had previously come up with a line which depicted the Kurdish peshmerga but later removed the line and apologized after it was highly criticized.