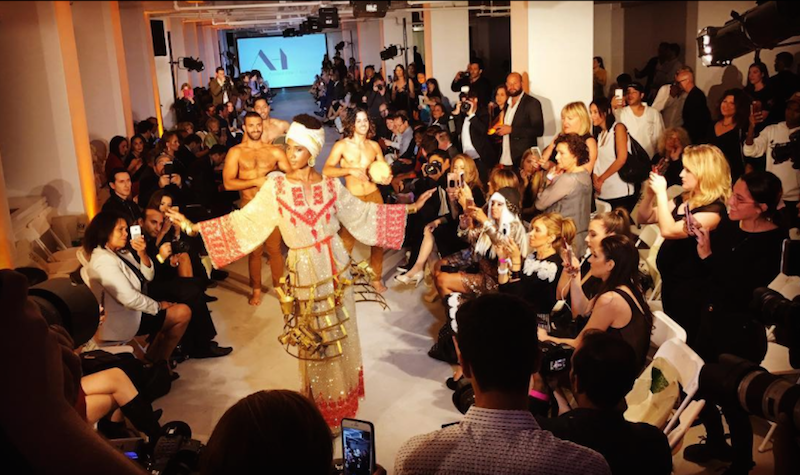 A group of Palestinian craftswomen has accused an Israeli fashion designer of deceit over a misleading partnership in creating a garment for New York Fashion Week (NYFW).

Seamstresses from Desert Embroidery, a group that works to empower Bedouin Palestinian women in the Negev, claim they unknowingly assisted designer Aviad Arik Herman raise money for an Israeli organization that promotes Jewish settlement in the area.

Herman initially approached the women to form a partnership creating a dress in the traditional Palestinian embroidered style ahead of NYFW, however the women assert that they were not informed of the true nature of the garment, calling the deal "deceiving and dishonest."

The designer allegedly did not tell the women that the OR Movement, an Israeli organization that promotes the resettlement of Jews to the Negev and the Galilee, had sponsored the garment's creation, according to Asma al-Saneh, head of the Association for the Improvement of Women's Status in Lakia.

Al Jazeera quoted Saneh as saying, "We regularly receive such requests from various designers and retailers in Israel - so this was not a one-time occurrence, and we had no problem assisting him [the designer]."

However, Saneh added that the group would have never agreed to the partnership had they known Herman and the OR Movement's true intent, "We feel that our end product was misused," she said.

The finished garment was ultimately displayed and auctioned off at an event co-hosted by the OR Movement and the Tahor Group, a New York-based organization that often showcases Israeli designers.

The OR Movement has created nine new communities and resettled some 33,000 people since its establishment in 2002, according to the group's website.

Many have argued, however that the movement aims to build Jewish settlements over the top of existing Palestinian villages.

Since learning of the true nature of the partnership, the women of Desert Embroidery have requested that the group's name be removed from any advertising materials and social media pages for the designer.

"How can we agree to be associated with organizations that help fulfill the [discriminatory] government's objectives, and agree to lend my culture [embroidery] for a dress showcased at a fundraiser that helps the movement build settlements on my land?" Saneh said.

The association has also refused to accept any payment from the OR Movement.