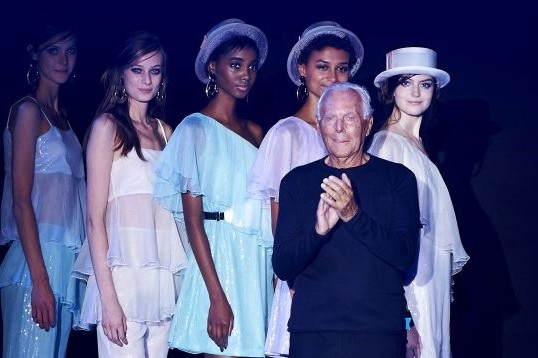 Italian labels Versus Versace and Emporio Armani brought the darkness and light to London Fashion Week on Sunday, burnishing the city's reputation as a fashion capital.

Industry icon Giorgio Armani had not displayed in London for 11 years, an eternity in the world of fashion, ending his hiatus to celebrate the label's renovated flagship London store in the upscale Mayfair neighborhood.

The spring-summer 2018 show at Tobacco Dock, a former tobacco warehouse, was marked by light and playful creations including a lightweight windbreaker with printed crab design, small, round-collared dresses, pastel-colored ensembles and flowing pants.

The label described the "frEAdom" collection as embodying "freedom as lightness of being and eclecticism of appearance."

The Italian fashion giant, more accustomed to the Milan catwalks, has around 3,000 points of sale worldwide, which the group is trying to consolidate.

Armani, 83, said he had chosen London for its "dynamism, energy and cosmopolitanism."

Fellow fashion giant Tommy Hilfiger was to arrive in Britain today in another coup for Fashion Week, which has always boasted audacious young designers but sometimes lacked big-name appeal.

Their presence is "proof that our city is an international crossroads of creativity and culture," said Caroline Rush, director of the British Fashion Council.

It is also a positive sign for the British economy, which is on uncertain foundations ahead of its departure from the European Union.

Earlier, Versus Versace stuck to its roots with a daring and provocative show, a daring appetizer ahead of Armani's return.

Versus, the Italian brand's laid-back line, transformed the city's Central Saint Martins college, a hub of British design talent, into a temporary nightclub for its 2018 spring/summer collection, with bass-heavy electro music booming from a giant wall of speakers.

The collection celebrated the mini and the transparent, the provocative and the daring, with short dresses in mesh worn over the top of black bikinis and low-waist shorts with printed chain designs.

The label remained faithful to its cherished black, which it embellished with lime green earrings, handbags and belts with geometric and mottled prints of American classic cars.

"Versus is about individuality, bravery and pleasure. This is for everyone who dares to express themselves in everything they do," said chief designer Donatella Versace.

On a more demure note, Versus presented a range of comfortable trousers, jackets and dresses in grey tartans, enlivened by flashes of bright colors.

The show was also the occasion to present the Gianni Versace scholarship for students of Central Saint Martins.

"It is with great pleasure that we are funding a yearly scholarship at the College as a tribute to my brother Gianni, and in his memory we wanted to nurture the creators of tomorrow," Versace said.

"Central Saint Martins educates and trains some of the best talents in the world of fashion and many of their alumni have come to work with me over years."

But not everyone is so enthused by the event's success, with dozens of animal rights protesters holding noisy demonstrations since Friday.

Many gathered before the Versus show chanting "You have blood on your hands" and demanding a ban on labels that use fur.

The Fashion Council told AFP that it "does not dictate what designers can or cannot design" but encouraged designers to "work with reputable organizations that supply ethically sourced fur."