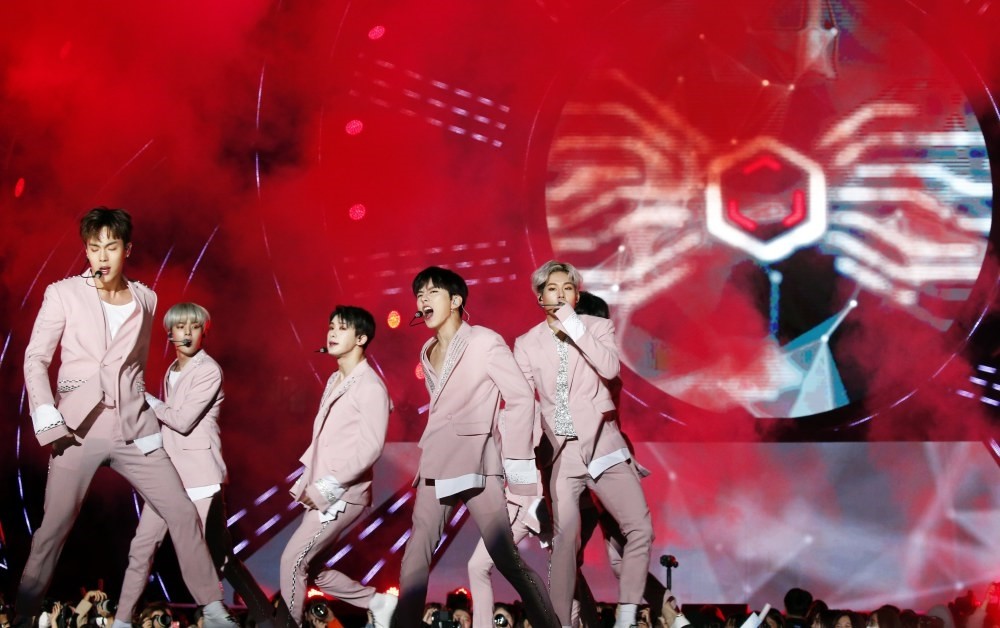 With insults being traded almost daily between Washington and Pyongyang, Koreans should be forgiven for feeling like they are balancing on the edge of a geopolitical volcano these days.

Yet South Korea could not be more hip.

The political tension on the peninsula has done nothing to dull the huge international success of South Korean K-pop singers who dominate the charts in much of Asia and beyond.

The country has also become a style destination for thousands of young Chinese visitors eager to copy the looks of their K-pop idols, with top luxury brands like Dior and Chanel competing to clothe them.

Young K-fashion designers hope to cash in on the style-icon status of K-pop stars to compete with Japanese labels, which have long been Asian fashion's big hitters.

Unlike Japan, where brands such as Comme des Garcons, Issey Miyake and Yohji Yamamoto are global names, few Korean labels have made an impact beyond their shores.

This weekend the Seoul government brought five of its rising talents to show at Paris Fashion Week as part of its "K-Fashion Project" charm offensive that has already made stops in New York, Beijing and Shanghai.

"We Koreans are very fashion conscious. We love fashion," Ju Tae Jin of the Korea Research Institute for Fashion Industry told Agence France-Presse (AFP) before the show in the French capital.

"The young designers have grown up in that environment, and they know how to interpret street fashion into their design DNA. They are very dynamic, and they are very good at presenting themselves on social media," she said.

Ju said Korean designers were particularly gifted in their amusing take on street wear, with Seoul giving Tokyo a run for its money in terms of youth style.

That fizzy creativity was emphasized in the five designers showing in the French capital late Saturday.

"I wonder what the fashion people here will think of the collection," said Kathleen Kye, whose designs have been worn by K-pop star G-Dragon, leader of the group BIGBANG. "So yes, it is quite important to me."

A graduate of London's prestigious Central Saint Martins, she launched her own label Kye in 2011 and is one of the better-known names taking part in Seoul Fashion week later this month.

The five featured brands, chosen from around 100 up-and-coming designers, are also having their clothes featured at the Colette store in Paris, a temple for fashionistas.

Her tops scattered with stars and seams embroidered with silver pearls, sell from for around 80 euros ($95) with jackets going for 400 euros.

Eunae Cho has an altogether different thing brewing. She called her collection Tibaeg ("teabag" in English) - with tea-leaf prints and green as her signature color.

Using light-as-a-feather glittery synthetic organza and flower embroidery, she rethought the long flowing traditional Korean hanbok dress, as well as sending some rather dramatic pleated pants down the catwalk.

The 36-year-old started her own brand in 2011 after leaving Yonsei University in Seoul and her clothes have since been sold in Los Angeles, Canada, Kuwait, Hong Kong and Singapore.

His rise has been a lot less conventional. He left school at 17 "because I needed to make money" and learned to sew in a factory.

He made his first T-shirts at the age of 20 and "cried I was so stressed ... It's quite a different story from people that have a lot of money and go to fashion schools," he said.

Two decades later after showing his clever and quirky creations at New York Fashion Week on his own bat, he made inroads in Milan, Hong Kong, the United States, China and France.

He has a clean, distinctive style and likes to link the new millennial generation with the hippies of the 1960s - just with "added IT" - jokingly calling them the "phono sapiens" because of how they live through their phones.