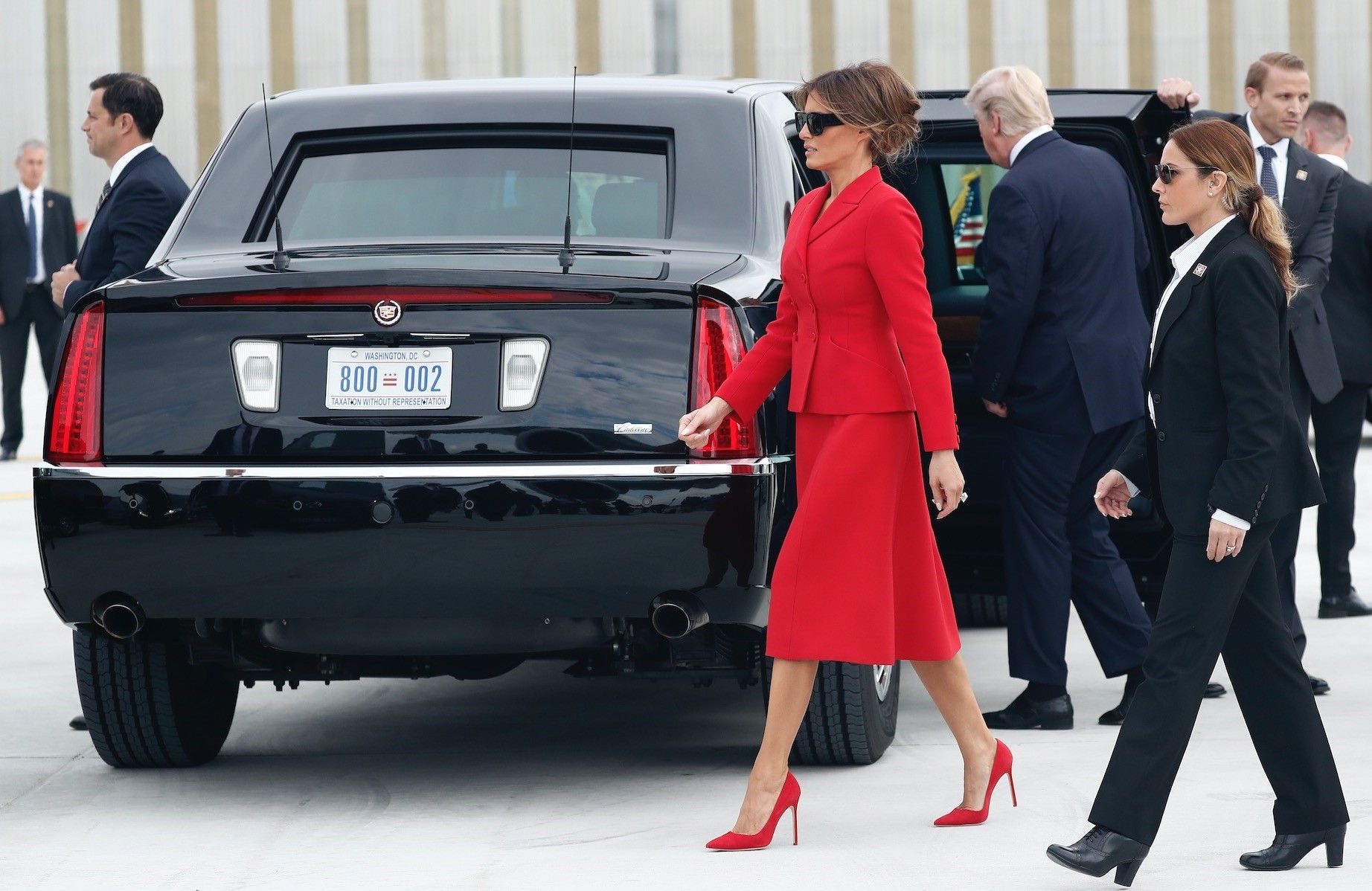 Melania Trump walks the tarmac after arriving in Paris, wearing Dior.
by Associated Press Jan 17, 2018 12:00 am

Slovenian-born Melania Trump has been unafraid to go against her husband's "America First" agenda and stay true to her roots, if there's a message to be taken from her bold, foreign-flavored wardrobe in 2017.

In her first year as the American first lady, Mrs. Trump has often wrapped herself in the clothes of her home continent as several American designers publicly refused to dress her in what was a fashion industry-wide backlash against her unpopular spouse.

The first first lady to be born in continental Europe, Trump grew up in Sevnica in Slovenia, in the southern Balkans, just over 100km (62 miles) from the Italian border. Her first real taste for fashion came while living in Paris as a young model in the mid-1990s, years before she got U.S. citizenship in 2006.

From designs by Dolce & Gabbana, Del Pozo, Christian Dior, Emilio Pucci, Givenchy and Valentino to daringly-high Christian Louboutin heels, the 47-year-old first lady's touchstones have not only been Old World, but its most established - and expensive - design houses.

As the wife of a billionaire, Mrs. Trump can afford to spend into the five figures for a garment and seems unconcerned about how that squares with voters in President Donald Trump's political base.

Since becoming the first lady, Mrs. Trump has chosen Herve Pierre, a French-born immigrant, as her fashion adviser. Politics be damned: He's helped her hone looks that emphasize the sleeve, eye-popping colors and big sunglasses, and show off her svelte, 5-foot-11 frame and thick, dark hair.

"In the news, we speak a lot of politics, so if for a moment we can forget about it and enjoy something else, why not?" Pierre told AP.

Mrs. Trump's old-school, dressed-to-the-nines glamour and full fabrics evoke distance not only in how far the clothes have had to travel, but in perceptions that the first lady, who only moved to the White House in June and rarely speaks publicly, is reserved in her persona.

Not since Jackie Kennedy has a U.S. first lady had such a European aesthetic as Mrs. Trump.

Although she wore Ralph Lauren to the inauguration and has also shown a penchant for U.S. brands such as Michael Kors and Calvin Klein, many of her most recognizable looks have been foreign designed and assembled.

It's a striking contrast with Michelle Obama -who famously used her first lady wardrobe as a way of championing often young American designers, and with Laura Bush and Hillary Clinton, who stuck closely to U.S. fashion brands.

Most of Mrs. Trump's clothes are bought off-the-rack from a retailer without the design house's knowledge that the garment is destined for the first lady.

This is highly unusual - and contrasts with Mrs. Obama's frequent collaborations with designers.

Perhaps it's not Mrs. Trump's choice, given her husband's unpopularity.