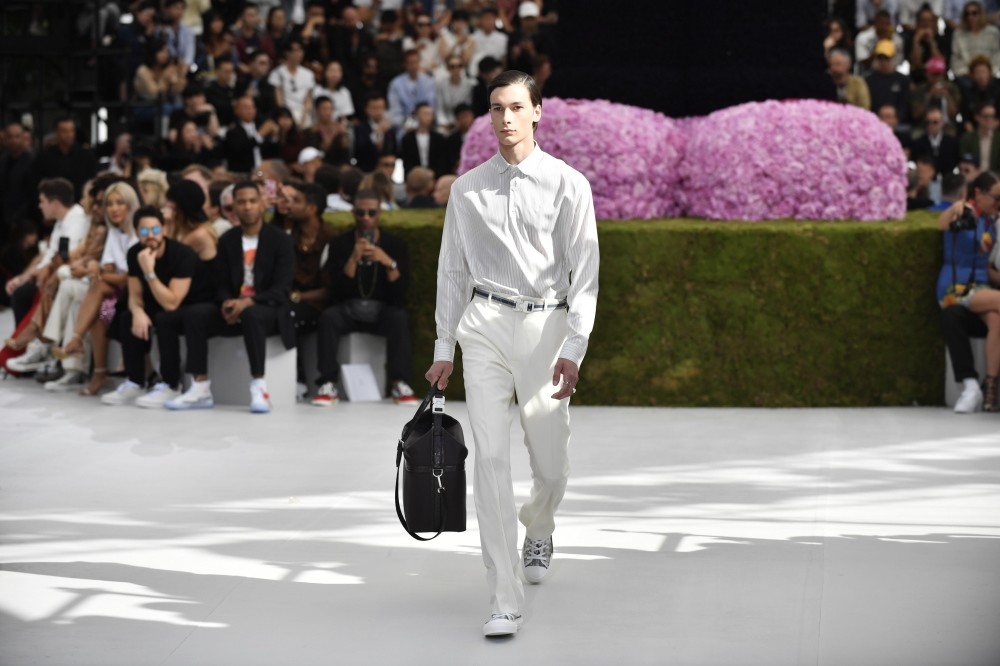 Gentle pastel colors fused with flashes of cobalt blue, yellow and florals for the display that moved the Dior aesthetic in a gentler direction than that of Jones' predecessor, Kris Van Assche, who looked on from the front row.

"Translating a quintessentially feminine couture identity into a masculine idiom results in clothes which are softer, with rounded shoulders and eased shapes," the house explained.

There was much artistry. The house's staple shirt was given a slashed cowl at the back, exposing the back - in a touch of cool. Floral motifs referenced Dior's love of flowers and a decorative landscape print cropped up in jacquards, embroideries and even in feathers. The program notes said it was a pattern used in the original 1947 boutique on Paris' Avenue Montaigne.

The Dior suits, in cashmere and summer mohair, were double breasted in reference to the diagonal shape of a women's Dior jacket from 1950. But to retain the edginess, the suits were worn against a naked torso on a model in sneakers.

It drew comparisons to Alice in Wonderland, Willy Wonka's factory and even Munchkinland as models with comic beards pretended to mow the lawn with metal contraptions or push a wheelbarrow full of flowers. One "gnome" model even climbed inside a tiny garden shed and stayed motionless the entire show.

A sheeny sky blue coat with images of whales opened the show, introducing a beautifully random maritime theme that continued in lobsters and crabs.

Sloping-shoulder suit jackets, oversize coats, bags and billowing culottes were imagined in picnic blanket-style crisscross. For the 60 looks, it was stripes and check galore. A double breasted coat-jacket in gray had blown-up pinstripes with the dominant silhouette of a wide, flat front.

All of the designs were accessorized with a bowler hat with a flower in it, a colored tie and gargantuan striped platform shoes.

Thom Browne's decision to include big, thick coats for his summer collection triggered a debate between two front-row fashion editors.

"Winter coats for summer?" asked one, puzzled."The seasons are almost the same in the industry now, anyway," answered the other, with some truth.

Progressively over the years, spring-summer and fall-winter fashion seasons have become increasingly blurred. Winter clothes such as big sweaters and big coats are no stranger to the summer catwalks. Often, summer shows are now distinguishable only for their brighter color palette and the occasional pair of shorts — and even that garment has been spotted in some winter shows.

Critics cite several reasons for the seasonal blur.Summer collections are first available to buy during the winter months and the proliferation of social media means that more people see, and therefore want, to wear the clothes months earlier than in past decades.

Global warming has also been blamed for designers' desire to mix up their styles given that the seasons themselves are less predictable than before.

A multicolored cube of giant speakers tied together with fluorescent yellow banding greeted guests at Sacai's warehouse show, suggesting that a quirky, avant-garde show was coming from one of Japan's top fashion houses.

That was not wrong.

Men's and women's designs merged in the diverse 57-piece show from Sacai, with geometric prints, checks and denim all mixing with silhouettes. Some coats or billowing skirts had exaggerated tapering proportions.

The one thing that created unity in this eccentric display was its vivid colors: purple, dark navy, bitter lemon, crimson and bronze. At times, the bright hues came on printed and patterned garments that evoked the ethnic styles of Latin America.