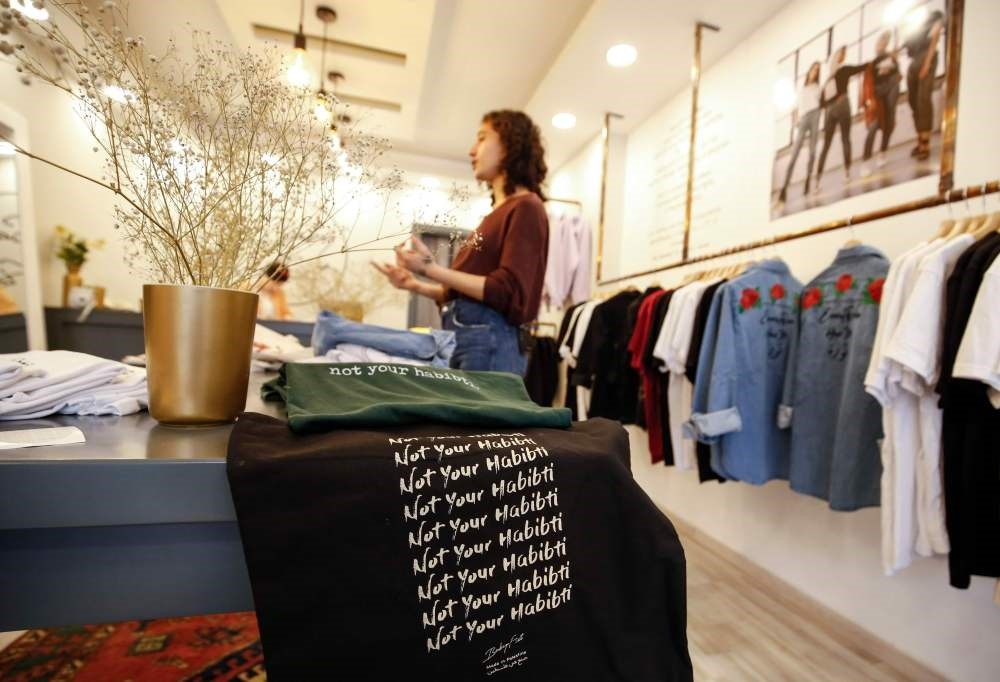 Palestinian fashion designer Yasmeen Mjalli speaks while standing in her clothing shop in Ramallah in the occupied West Bank, Dec. 19, 2018.
by Jan 16, 2019 12:00 am

It's only three words on a T-shirt or embroidered on a denim jacket in Palestinian designer Yasmeen Mjalli's collection, but it carries a powerful message: "Not your habibti," or darling.

"When a woman is exposed to so much harassment on the street, she begins to dress to protect herself, to hide herself as opposed to expressing herself," the 22-year-old art history graduate says, leaning against the counter of her shop in Ramallah in the occupied West Bank.

On fabrics of muted colors and on canvas bags from her BabyFist label, she places messages in English and Arabic inside drawings of flowers and other designs.

"Every rose has its revolution," one says.

Mjalli grew up in the United States, where she lived with her Palestinian parents. She started painting slogans on her own clothes when the family relocated to the West Bank and she found herself facing a different reality.

"I have experienced things like comments, really uncomfortable stares, and the kind that make you feel very violated," she said. "I have been assaulted in the streets, people touching me," she adds, catching one tattooed arm in her other hand to mimic being grabbed.

In August 2017, she launched her first collection and a few months later opened the Ramallah shop to complement her existing online sales.

"It's not like the T-shirt is going to stop harassment," she says.

But it's "a reminder that you are part of something bigger that is working to empower women and to give back in some way and that is trying to have this conversation that challenges all of these structures which we are victims of too," she adds. The goal, Mjalli says, is to create a community.

Using Instagram, free workshops in her shop and public places where she sometimes installs herself with a typewriter, she offers Palestinian women the freedom to express their feelings and tell stories they cannot share elsewhere. She donates around 10 percent of her fashion earnings to a local women's group.

One project she funds sent a doctor and volunteers into schools to teach Palestinian girls about menstruation, a subject still largely taboo. While defining herself as a feminist, Mjalli says that her fight against harassment of women is unconnected to the #MeToo movement.

"I don't think it's related even though it happened at the same time," she said, though acknowledging that the movement gave her own efforts a boost. "It's a very American and it's a very white feminism, and it's not what we are doing here."

All BabyFist garments are made in the Palestinian territories. Jackets are sewn in Hassan Shehada's Gaza workshop. Among the sewing machines humming under florescent lights, Shehada shows a denim jacket embroidered with "Not your habibti."

"I am proud that women wear the fruits of my labors and I am also very proud that they are labelled 'Made in Palestine'," he says.

In the past three months, he has made 1,500 items for BabyFist. It was a breath of fresh air for Shehada's business in the Gaza Strip, under an Israeli blockade for more than a decade and with endemic high unemployment.

"Working with BabyFist has given me back hope," he says, adding that it has fulfilled a dream of exporting to Europe.

But manufacturing in Gaza comes at a cost. Israeli restrictions mean jackets have been held up for weeks when the land crossing through Israel was closed due to mass Palestinian protests and clashes along the fence, Mjalli said.

"The border was closed indefinitively and we couldn't get anything in or out," she said. "It's a constant battle." She says that around 40 percent of her sales are made in the Ramallah store and 60 percent online, mostly to the Palestinian and the broader Arab diaspora.