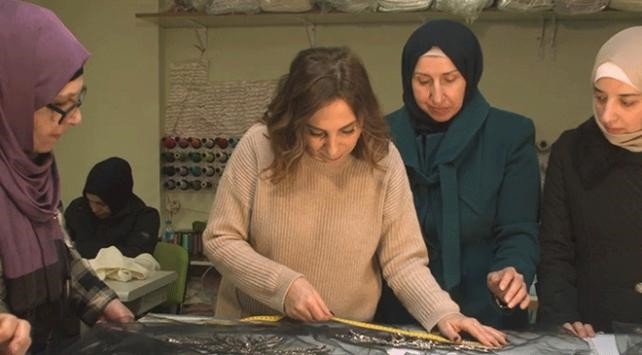 A special event supported by Turkey's Presidency's Directorate of Communications will be organized as part of the fashion week, where exclusive designs will be showcased at the London Presentation Studio at 8 p.m. (GMT).

Women who fled the conflict in Syria created the designs with the help of Kartal in garment workshops in Istanbul.

Communications Director Fahrettin Altun announced the event in a message on his Twitter account, noting that Turkey, which is the largest refugee hosting country in the world, "provides hope for the downtrodden."

With support of Presidency's Directorate of @Communications designs co-created by fashion designer Zeynep Kartal&the Syrian women who fled from war, are showcased at #LondonFashionWeek.
Turkey, the largest refugee hosting country in the world, provides hope for the downtrodden. pic.twitter.com/cNJjl1F1gL

Zeynep Kartal is an experienced fashion designer based in Manchester. She created pieces for famous stars including Cheryl Cole, Lady Gaga, Whitney Port and more.

Turkey emphasizes the empowerment of female refugees, as women and children make up the majority of refugees in the country. Education is a key part of the integration of refugees as 1 million of these refugees are children of school age. Turkey granted access to public schools in 2014 for refugees, and despite a language barrier and a different curriculum, Turkish language classes, remedial courses, counseling etc. helped more Syrians to enroll in Turkish schools. As of 2018, some 611,418 Syrian children are enrolled in Turkish schools, which equals 63 percent of the school-aged population.