Turkish fashion: From the heart of Central Asia to Anatolia 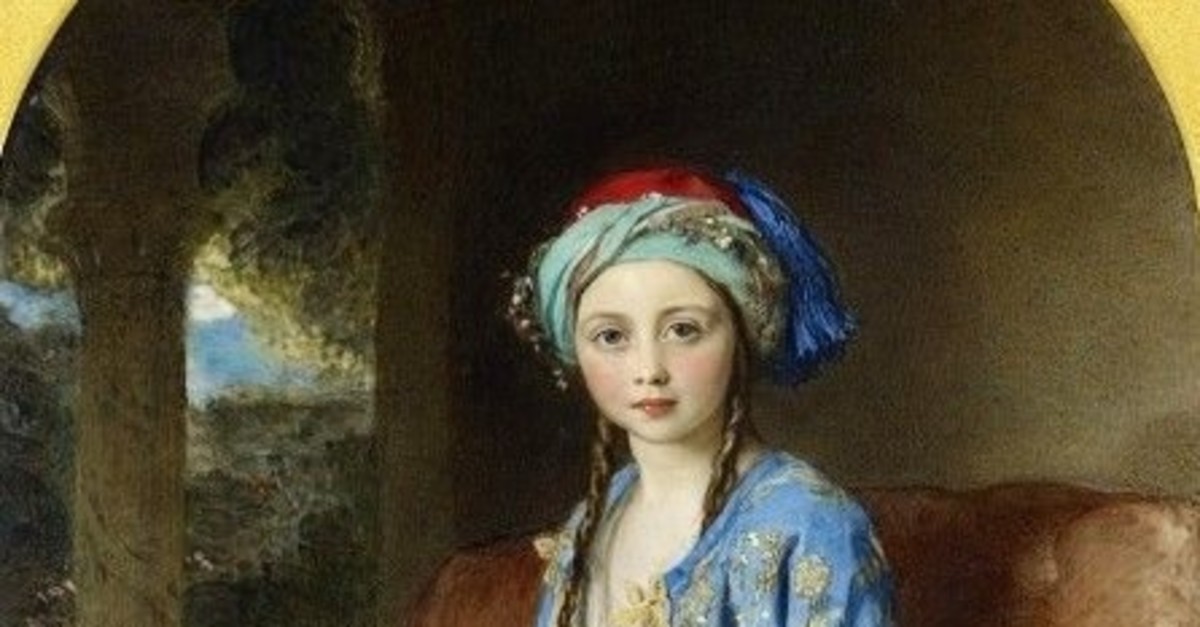 An oil painting of Victoria, Princess Royal, in an Ottoman-style costume by William Charles Ross.
by Miraç Tapan Mar 28, 2019 10:21 pm

Fashion is an ever-changing concept in the 21st century, but back in the day, it was a manifestation of culture and people's lifestyles, as is evident from a look at the fashion history of Turkey

What is fashion? Is it only a way to protect oneself from nature by covering up? Or is it wearing the latest trends?

When mankind first began living in caves, they did not have many choices: They had to make clothes from the hides and furs of the animals they hunted. Their only concern was to protect themselves from the harsh climate. Then a time came in history where fashion became larger than life industry; it became a major element that captured the true soul of the time. If you look into the history of the Turks, you come across a nation which was once nomadic or made up of soldiers, who later founded one of the greatest empires in the world and thus a modern country was born from its ashes. The historic journey of the Turks also reveals itself through fashion.

The fashion of nomadic Turks

When the Turks were nomadic tribes living in Central Asia, they adopted their fashion sense to their lifestyle, which required mobility as well as efficiency in battle. The gravures and miniatures that date back to the Turks' nomadic times indicate that the Turks used leather and wool which they produced from animals such as lambs, cows and wild animals including bears and foxes. Loose shirts and pants called "şalvar" were combined with a jacket or vest called a "kaftan," the look was completed with leather boots and a belt. The Turks also traded silk with the Chinese and used the colorful silk to add a little grandeur to their look. Since Turks, both male and female, were masters of horse riding, wearing pants was a must to be ready for battle at any time.

After accepting Islam as their religion, Turkish fashion began to be influenced by the Persians and Arabs, although the style was adapted from other nations, the ornaments and the unique embroidery of the Turks remained intact. Coming to Anatolia, the Turks continued to interact with new people and terrain which required an adaptation of fashion. Yet, neither the Seljuks, who were mostly influenced by Persian style nor the Ottomans who were under the influence of the Arabs, forgot the comfortable and practical clothes that they wore on the moors of Central Asia. 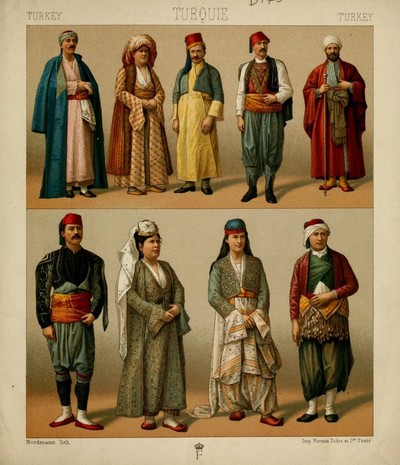 Ottomans in their traditional clothing which varied from region to region.

Until the 17th century, Ottoman fashion was anything but dull. For the Ottomans, clothes were a sign of social status. Apart from the fabric of the clothes, the color one was wearing was also crucial. For instance, common people were banned from using fabric and colors that members of the Ottoman court wore. Also, not all attire was suitable for every occasion, the time and place was key while organizing one's wardrobe.

However, there was one color that the Ottomans did not like to feature in their clothes - black. Ogier Ghiselin who served as the Austrian envoy to the Ottomans in the 16th century stated that the Ottomans hated the color black as it reminded them of sorrow and catastrophe, and preferred dark green instead.

The colorful and relaxed attire of Ottoman women even beguiled European women who were confined in their corsets and dresses that made it impossible to walk in. Lady Mary Wortley Montagu, an English aristocrat, writer and poet who spent many years in the Ottoman Empire, was fascinated by Ottoman fashions. In her letters which later shone a light on 18th century Ottoman life, she described the outfit of Sultan Hafize who was the favorite of the then Ottoman sultan.

"... but her dress was something so surprisingly rich that I cannot forebear describing it to you. She wore a vest called 'donalma,' which differs from a kaftan by longer sleeves and folding over at the bottom. It was of purple cloth, straight to her shape and thick set on each side, down to her feet, and round the sleeves with pearls of the best water of the same size as their buttons."

Back in the day, posing in Ottoman attire for portraits became fashionable, not only for European women traveling in the Ottoman lands but also for people living all across Europe.

By the 18th century, the Ottoman Empire was transforming into a more modern state from head to toe, including in its fashion sense. Although the attire of the women was not directly affected by this modernization, the Ottoman sultans and the officers hung their kaftans and şalvars and traded them for pants and jackets, mostly in the military style.

Male attire changed drastically during the reign of Sultan Mahmut II in the 19th century. The Ottomans left their turbans for the fez and şalvars for European style trousers. For women, however, it all changed with the founding of the Republic of Turkey in 1923. Turkish women became more and more part of the social life and started to wear more practical and European style attire that allowed them mobility. But, the change was not sudden.

With European influence, women began to wear more expressive outdoor clothing, in colors that had been restricted in the past. They also began to wear a new type of outdoor clothing, çarşaf, instead of the traditional outdoor robe, ferace. Veils were either made transparent or were completely replaced with an umbrella used to hide the face, because women were a huge part of the workforce after the war. In time, however, especially in the big cities such as Istanbul and İzmir, women captured the soul of the time with their short hair, flapper dresses, coats with fur collars, fancy clutches and more glamorous attire.

By the time the 1960s rolled around, the tailored clothing of the past was replaced by the ready-to-wear clothing industry.

Back in the day, every country had its own style for men's and women's clothing but today what we are wearing is almost the same as people living in Korea or Brazil. Globalization has turned the entire fashion industry into a "copy-paste" style. Whether this is a good thing or not, well, only time will tell.