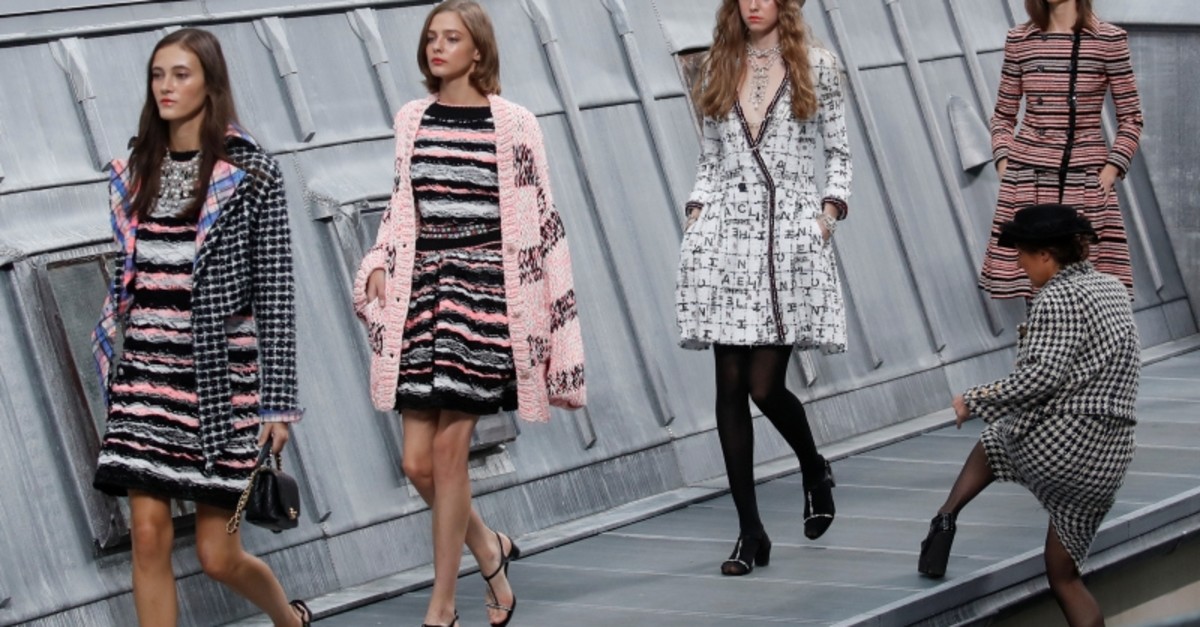 Supermodel Gigi Hadid confronted a gatecrasher at Chanel's Paris fashion week show on Tuesday after the prankster walked unchecked onto the catwalk with the models for the big finale.

The French comedian ran from her seat and joined the models as they did their last walk along a spectacular set recreating the rooftops of Paris inside the Grand Palais.

With security guards left floundering, Hadid confronted the gatecrasher as she tried to further upstage the models, with the two facing off on the set.

The daring infiltrator, Marie Benoliel, a comic and YouTuber known as Marie S'Infiltre (Marie Sneaks In), was dressed from head to toe in a black and white Chanel-like houndstooth tweed suit and hat.

After her Chanel stunt she took to Instagram to declare, "Marie S'Infiltre strikes again!"

Guards only realized that she had joined the models when it was too late to intervene.

"I couldn't stop laughing because the hapless security guards couldn't spot her in the line-up," said New York Times fashion writer Elizabeth Paton, who had been on the front row.

By then Benoliel was giving it her all, waddling down the catwalk with her hands on her hips like a supermodel.

Moments later as she left the line of models to pose further up on the rooftop, Hadid marched over to determinedly block her way before the visibly miffed model escorted the comedian offstage.

Chanel told AFP that the woman had taken them by complete surprise but that "this is not the first time that she has done this."

"We are not going to make a drama out of it," a Chanel spokeswoman added.

"We would have preferred if it hadn't happened."

They said Benoliel was "escorted to the exit by our security personnel afterwards."

Cardi B 'a little scared'

With the front row crammed with celebrities from US rapper Cardi B to K-pop star Jennie and French actress Isabelle Adjani, security had been tight.

Cardi B said she "loved the show" but admitted to later Women's Wear Daily that "I got a little scared when homegirl flew out there."

The models hardly blinked an eye as the comedian climbed onto the catwalk, making space for her as they filed backstage.

It was only as she doubled back to milk her big moment to the full that Hadid acted.

Most of the hundreds of fashionistas at the show did not realise what had happened as they clapped or filmed the finale with their smartphones.

Benoliel's YouTube profile describes her alter ego "Marie" as a character "who sneaks in everywhere to reveal the comic reality hidden in the news."

Chanel designer Virginie Viard had turned the clock back in her spring summer show, with a battalion of models channelling the insouciant sophistication of 1960s socialites.

Viard said she took Hollywood actress Kristen Stewart and the mold-breaking French New Wave films of the 1960s as her inspiration.

"The rooftops of Paris evoke the New Wave for me," she said. "I thought of Kristen Stewart playing Jean Seberg and all the actresses that Gabrielle (Coco) Chanel dressed at the time," she added, referring to the brand's founder.

Like several Paris shows over the last nine days Chanel's clothes marked a strong return to femininity after several seasons when androgyny ruled the catwalks.

With its copious references to the French capital, Chanel also paid homage to the city's style tribes of the 1960s and early 1970s, who also dominated the earlier Celine and Saint Laurent shows.

Viard took over the iconic French brand in February days after the death of its legendary designer Karl Lagerfeld.