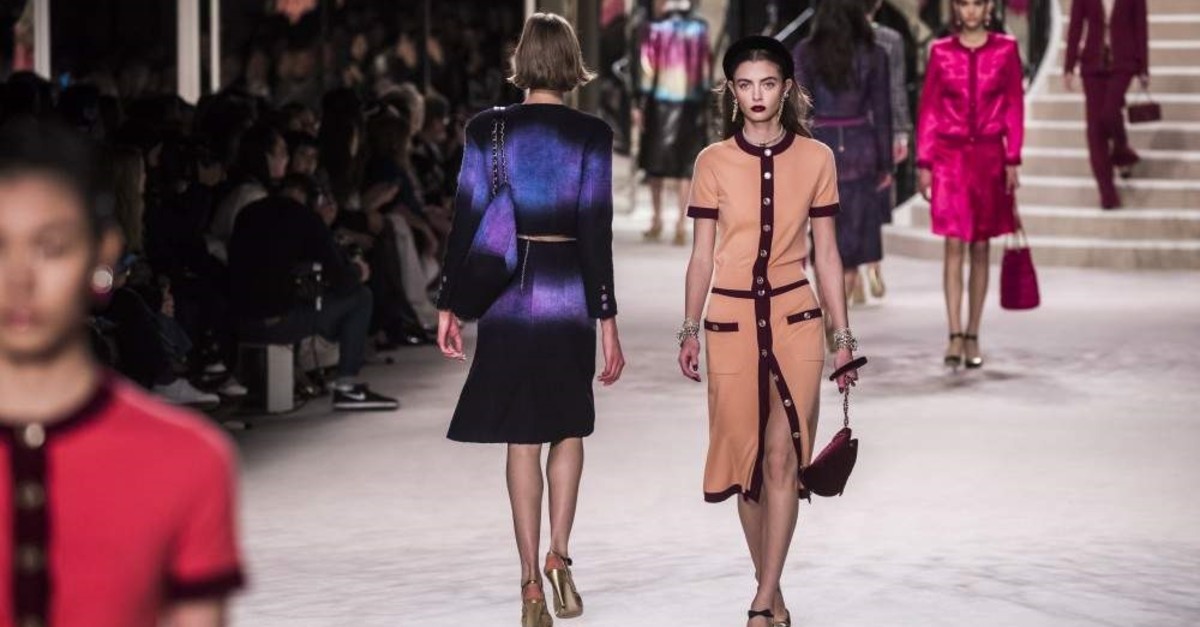 Models present creations during the Chanel Metiers d'Art 2019/2020 show held at the Grand Palais, Paris, France, Dec. 4, 2019. (EPA Photo)
by Associated Press Dec 05, 2019 2:06 pm
Chanel brought its off-season fashion show “arts and crafts” back to Paris on Wednesday to mark its first collection since Karl Lagerfeld died earlier this year.
New designer Virginie Viard teamed up with film director Sofia Coppola this season to imagine a cinematic opus that saw the house’s 1920s Rue Cambon atelier – replete with crystal chandeliers and mirrored cubist staircase – recreated under the lofty roof of the Grand Palais exhibition space.
Unlike the seasonal collections that trickle down to set high street trends, the “arts and crafts” pre-collection aims at showing off and celebrating the work of the artisans that are the beating heart of Chanel and the Paris fashion industry as a whole. Celebrating their technical know-how is one way that storied Paris heritage houses have tried to distinguish themselves in the face of increased competition from other fashion capitals, such as New York and Milan.
The first looks, in black with oversized shoulders, were simple enough to let the embellishments do the talking: large silvery art deco waistbands with beading, bejeweled cuff bands or large geometric buttons with silver rims. A staple black sweater and knee-length skirt were given life with rings of pearls that cascaded down to a black and gold chain belt that resembled the strap of the house’s iconic handbag. Camellias adorned with ethereal feathers as prints, while ears of wheat were constructed in glimmering gold sequins. They set the agenda of the show. The fashion panache here was hidden in the details that were delivered with couture-like finesse.
Its swath of VIPs included Penelope Cruz and Marion Cotillard. “The show was incredible,” exclaimed Cruz, who reminisced nostalgically about walking around Central Park at midnight with Lagerfeld last December after last year’s Egypt-themed Chanel show in New York.
Since 2002, the “arts and crafts” show has traveled around the world to highlight the fashion artistry of Parisian embroiderers, feathermakers, adornment craftsmen, pleaters, shoemakers, milliners and glovemakers.
After shows in Hamburg, Edinburgh, New York and other far-flung locations, Chanel returned to the French capital where it may be the last chance in a long time to stage it at the Grand Palais, which is scheduled to close for renovations next year ahead of the 2024 Olympic Games in Paris.
This year’s homecoming echoes the very first show, held in the salons at 31 Rue Cambon – Chanel’s storied Paris atelier.
It was the late house founder Gabrielle “Coco” Chanel who first understood the need to support struggling artisans in the field in the 1950s, culminating in the creation of the body of crafts, Paraffection, in 1985.
This vast network, which employs some 5,000 workers and includes famed embroider Lesage, does not work only for Chanel but also multiple other big names in the fashion industry.
“There is something so generous about how Chanel has supported the Parisian fashion industry as a whole,” Cotillard said following the show. “Chanel is a sort of ambassador for France and Paris over the world and it makes me so proud,” she added.
Last Update: Dec 20, 2019 2:09 am
RELATED TOPICS