Hijabi for a day 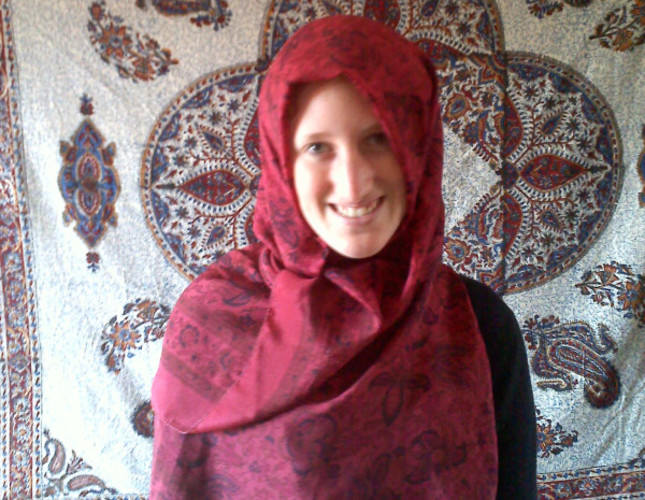 Sara Weissman, a 17-year-old Jewish woman embraces the hijab for a day as part of a challenge set for her as the editor of her local newspaper. She accepts the challenge and uses the opportunity as a learning curve to gain insight into the life of Muslim women

A young Jewish American woman steps out of her comfort zone to don the hijab for a day. What she took away from the experience gave her insight into why Muslim women across the world would choose to cover

"What we choose to wear is a sign of who we are, what we aspire to be, and how we choose to represent ourselves," said Sara Weissman, 20, a second-year college student at the University of California Berkeley. "So imagine wearing your heart on your sleeve or rather your religious devotion over your head."

Weissman was 17 when she wore hijab for one day as a challenge of the month to the editor of the newspaper of her Jewish community day school. She was nervous, considering the scary and relatively new phenomenon of Islamophobia.

However according to her, that day in the headscarf was a way to take a tiny glimpse into something larger, a practice meaningful to millions of people and the idea that, though the clothes do not make the woman, they can say a lot about what she believes.

Before taking the scarf, Weissman wanted a better understanding of the origins of the hijab. To prepare, she read multiple references to hijab in the Quran. According to Chapter 33: al-Ahzab, verse 59, "O Prophet! Tell your wives and your daughters and the women of the believers to draw their cloaks all over their bodies. That will be better, that they should be known (as free respectable women) so as not to be annoyed. And Allah is Ever Oft-Forgiving, Most Merciful." In another verse in Chapter 24: al-Noor , verse 31, it is written, "And say to the believing women…that they should draw their veils over their bosoms and not display their beauty except to their husbands, their fathers, their husbands' fathers, their sons, their husbands' sons, their brothers…"

"After reading the references, my inner American feminist was a little miffed," said Weissman. "But many Muslim women feel very differently. In fact, they feel quite the opposite, embracing the hijab as freeing as opposed to forced expression of their faith."

Eventually on a Wednesday morning over her winter break, she decided to wear hijab and went about her day as normal.

"I felt different," she admitted. "Even if it wasn't my own religion, I suddenly felt like I had to reflect what the scarf represented.
I tried walking straighter, smiled at strangers, and tacked extra pleases and thank-yous on every sentence to the sales clerks at Macy's."

Despite feeling like she looked different, she said wearing hijab made her feel more comfortable in some ways.

Most of her interactions were normal, but she noticed she was attracting both benign and unwanted attention. She received a few curious stares, but some were hostile.

"A man continued glaring even after I looked at him in the eye while a saleswoman, chatting up other customers, spoke curtly and would not look me in the eye at all," she said.

Despite some hostility, Weissman believes at the end of the day, the number of odd looks was nothing compared to the number of smiles. Just after unpinning her headscarf, she concluded her difficult experience was worth it. She was really impressed by women willing to cover parts of their body while at the same time standing out for the sake of God and their religion.

"In the end, the biggest lesson I learned was that clothing can be fabric or it can reflect who a person wants to be," she concluded. "For Muslim women, the hijab is a constant reminder that they are always aspiring toward better observance of their religion. The take-home message I got from a day in hijab was we can change our clothes, but more importantly our clothes can change us. The question is what do we want them to reflect?"

Perhaps unlike what she expected, she received mostly positive feedback from her journey in the hijab. The annoying looks and irritating reactions were not the norm, but not unexpected in a community not used to such covering.