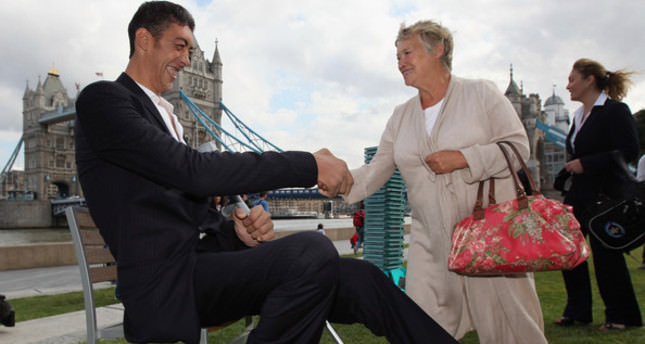 1. Cem Karabay, with the assistance of his diving crew, successfully remained underwater for 135 hours, two minutes and 19 seconds, earning him a spot in the Guinness Book of World Records.

2. Organized under the coordination of the Antalya Governorship, the record for the highest number of organ donations made in one hour was broken in seven minutes.

4. Kemal Gökgül now holds the record for ironing 464 clothing items in 42 hours, performed at a mall.

5. An art teacher in Trabzon and his 100 students set a record of creating the world's largest marbling art.

6. The world's longest pismaniye - a type of cotton candy specific to Turkey - was made in Izmit at the Turkish Cotton Candy Festival.

7. In a record experiment organized by Danskeyfi Akademileri, 198 couples performing the Batchata Dance managed to get Turkey in the Guinness Book of World Records for the most crowded group that performed the dance without flaw and in synchronization.

9. Zahit Okurlar, a shoe cobbler in Konya made the world's biggest shoe in size 455.

12. Safa Önal, a veteran screenwriter for Turkish Cinema broke a world record for having 395 scripts filmed.

14. Murat Aksu broke the world record for the longest shish kebab at the 2010 "Traditional Turkish Festival" held in the United States.

15. The specially made 198 kilogram kebab placed on a 5-meter-tall spit in Ankara made it into the Guinness Book of World Records.

16. National Marathon Swimmer Mehmet Gedik broke the Guinness record for staying in an ice-filled bathtub at -9 degrees Celsius for 51 minutes.

17. Mehmet Özyürek took the Guinness World Record for the "world golden nose" for an 8.8-centimeter-long nose.

18. A handbag company in Konya entered the book of records with a 6.3-meter-tall gigantic bag weighing 900 kilograms.

19. 580 students from nine different universities across Turkey set a record for the world's longest graffiti scroll extending to 760.28 meters

20. The 30 day knitting event organized by the Bayrampasa Municipality had 45 people knit a 45-meter-long, 18-meter-wide jumper that got them in the Guinness Book of World Records.

22. The efes (in history, efes were the leaders of Turkish irregular soldiers and guerillas from the Aegean Region of Anatolia, called the Zeibeks and Kızan) clad in ethnic costumes made it into the book of records with an organization in Aydın, an Aegian province of Turkey.