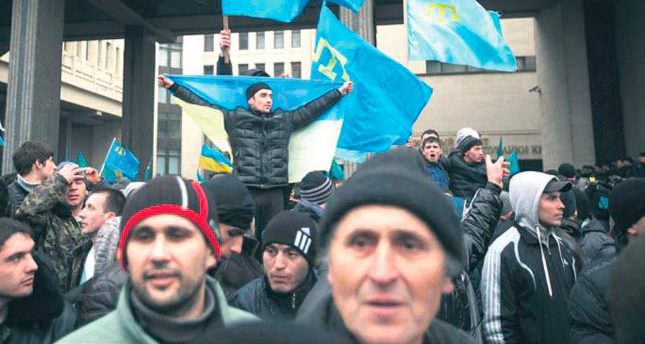 A homeland for Tatars since the eighth century and ruled by the Ottoman Empire for hundreds of years until the Russian conquest, anything that happens in the Crimean peninsula reverberates in Turkey

Ukraine is on the brink of separation after the recent change of government.

On one side is the country's west under Kiev's control. On the other side is the Crimean peninsula where much of the population is ethnic Russian.

The status of Crimea - whether it becomes independent, remains under Russian control, or is returned to Turkey - is now becoming increasingly important as events unfold Crimea has been the homeland of a Turkic tribe, the Tatars, since the eighth century. The region was dominated by emperors from Genghis Khan's dynasty and adopted Islam in the 13th century. The Golden Horde, a khanate located in the northwest of the Mongolian Empire bordering the Black Sea, collapsed in the 15th century.

Surrounded by states dominated by Russia, the ruler of the khanate was forced to recognize the rule of Mehmet the Conqueror in order to sustain Crimea's existence. The status of the state was defined with an agreement that came into force in 1475 with palace protocols, bureaucratic principles, Muslim legal scholars and the judiciary of the Ottoman Empire.

An assembly in Istanbul that included Crimean noblemen and individuals from Prophet Muhammad's family elected the khan unanimously.
Starting in the 17th century, the Ottoman authority in Istanbul undertook elections, appointments and removal of the khans. Following the Friday sermon, the name of the khan was announced and coins were issued bearing his image. The khans were eligible to change ambassadors with other countries and were also considered equal with the grand vizier in bureaucratic protocol.

A sea surrounds the Crimean territories, but the state could not have a navy or infantry army. If necessary, the territories would be provided with 100,000 cavaliers from the Ottoman army.

With its strong military power, the khanate was one of the biggest countries in Eastern Europe and ruled Ukraine and North Caucasus. The Crimean khanate also dominated Poland and Russia. In bureaucratic relations, the princes of Kiev and Moscow, as well as the Ukrainian Kazakhs, could negotiate with the Crimean khan, not the Ottoman emperor.

After acquiring a level of autonomy, the status of the Crimean khanate changed at the beginning of the 17th century. The khan became the governor of the province and lost his dependence on the Ottoman central power as the Ottoman Empire, afraid of Russia's expansion, lost control of Crimea. Despite these changes, however, the influence of the caliph over Crimea's judiciary, religious institutions and foundations remained until the rise of the Communist government.

Every year, the Ottoman emperor, acting as the caliph of the Muslim world, sent a delegation to welcome Russia's tsar at the summer palace in Livadia, located in Crimea. Crimea became autonomous when the Treaty of Küçük Kaynarca, signed after the Ottoman defeat in the Russo-Ottoman war of 1768 to 1774, came into force but was still obliged to be religiously subjected to the caliph in Istanbul. Despite the official autonomous status, the Ottomans had the right to veto the khan and appoint those in leadership positions in the judiciary, religious institutions and the heads of foundations. The Ottoman emperor maintained influence as well by asserting himself as the religious leader of Muslims worldwide.

Concerning the future of Crimea, noblemen were divided into supporters of Russia and of the Ottomans. Russia consequently benefited from this situation by taking the authority of the appointment of the khan from the Ottomans. A pro-Russia noble named Şahin Giray was assigned as the governor of Crimea from 1777 to 1782. Giray was known to wear Russian uniforms, and his cavaliers came from Russia. Different from his ancestors, he did not travel on horse but on a Russian-style brougham, a light, four-wheeled horse-drawn carriage.

Notably, he took orders from Russian ambassadors. After seizing the foundations, Crimeans staged a revolt against his leadership, and Giray requested help from Russia. The khan sent an emissary to the Ottoman commander taking military measures at borders, who was assassinated by the commander's housekeeper. After the assassination of the emissary, Crimea was formally annexed to Russia in 1783. Russian Empress Yekaterina II, commonly known as Catherine the Great, had secretly signed a declaration announcing the occupation of Crimea in order to end the dispute with the Ottomans. At that time, there were no Russians living in Crimea, which had 1.5 million Turkic inhabitants. Those who did not take a loyalty oath to Catherine the Great could leave, but those who remained were promised security and freedom of religion under Russian protection.

For the first time in history, an Islamic territory whose population was composed entirely of Muslims was lost. This loss of a three-century-old Ottoman territory opened a massive wound in the national conscience. One of the next main focuses of Ottoman politics was to regain Crimea. A military campaign by Ottoman Sultan Selim III, however, was unsuccessful.

During the time of the Russian takeover, nearly 3,000 noblemen were assassinated after they were tortured and their property seized. More than half of the population of the region would die because of malnutrition, illness, poverty or by the sword of Russian soldiers. The remaining population was moved to Rumeli or Anatolia. In their place, a large number of Russians were resettled in Crimea under the direction of Catherine the Great. The region's mild weather, agriculture and viticulture were developed. The Crimean landscape, now dotted with Russian-style buildings, became a sanatorium for patients with lung illnesses.

After being used by Russia, Giray escaped to Istanbul and was exiled to Rhodes and eventually assassinated. The Ottomans did not have the courage to politely protest this occupation. With three articles, which came into force on Jan. 8, 1784, the Crimea Bill acknowledges that Crimea officially became a part of Russia. The Ottomans won the Crimean War in 1854 by allying with England, France and Sardinia.

This victory revived the Ottomans' desire to occupy Crimea again. Although for the Ottomans, the war principally concerned the Crimean territories, the Ottomans did not reacquire any land in Crimea. Poland was known as a buffer zone between the Ottoman Empire, Germany and Russia. Following World War I and the Russian occupation of Poland in 1920, the Ottoman Army was defeated. Russia took this opportunity to occupy Crimea in 1921. Crimean princes and noblemen, who once trusted Russia and its promises of independence, felt cheated and decided to resist.

Russia was victorious, however, as the khanate's army was medieval and the Ottoman army unable to reach the peninsula in time. Crimea declared its freedom after the Bolshevik revolution.

The Communists, however, were still able to gain control of Crimea in 1918, when they established an autonomous Soviet Republic. The Tatars, who lost their autonomy, would ally with Germany in World War II but were doomed when the Allied Forces were victorious. Tatars were put on trains to Siberia in May 1944 under the orders of Joseph Stalin. More than half of those exiled died during the journey. In 1945, Crimea became a part of Ukraine. Although Tatars, who were vilified for allying with Germany, regained their political reputation in 1966, they could not return to their homeland. Only those with the knowledge of viticulture were given permission to return. Indeed, Crimea's prominent viticulture was drained. With the collapse of Communism after the 1990s, Tatars were granted permission to return to their homeland. Today, a little more than 10 percent of Crimea's population is of Tatar origin. When Ukraine declared its autonomy in 1991, there was much discussion on the status of Crimea. The Tatar autonomous parliament declared the independence of Crimea at this time, but the declaration was rejected by Kiev.

At that time, Pravda, a Russian political newspaper associated with the Communist party, said that if Ukraine is divided then the status of Crimea would become ambiguous. Crimea's status was formerly defined in 1954. Among Putin's close circle, Andrei Vladimirovich Bogdanov and extreme right-wing supporter Vladimir Jirinovski said, "Turkey is the true owner of Crimea."

In the event Crimea declares independence or becomes a protectorate, there are no provisions in international agreements that would return Crimea to Turkey. Even if there was such a provision, the provision would be void as Crimea came under Ukrainian rule in 1954.
The situation now is critical. Russia has the largest navy located in the peninsula. It openly supports independence - and perhaps later the occupation - of Crimea, claiming to act for the interest of ethnically Russian Crimeans, who make up more than 60 percent of the population.

A referendum on the status of Crimea would leave little doubt that the population would vote for independence due to its population structure.

Tatars in the peninsula, however, are in favor of Crimea remaining in Ukraine as Russian intervention and ethnic Russians may spark a civil war or a massacre of the Muslim Tatar population.