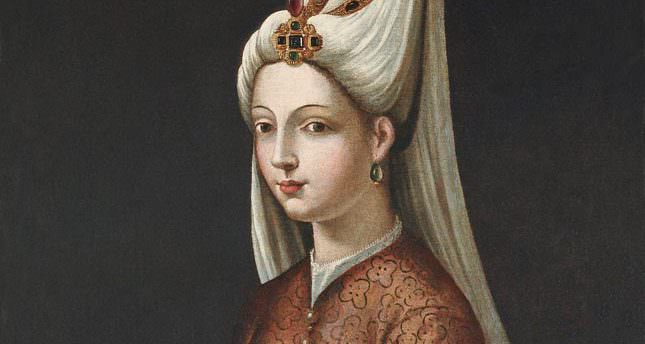 Mihrimah was the beloved daughter of Sultan Süleyman the Magnificent and the only sister to his five sons from his beloved Hürrem Sultan. She actually had a sister, Tasasız Raziye Sultan who passed away at an early age. Her name, Mihrimah - sometimes spelled "Mihrümah" - means the "sun and moon" in Farsi.

Extant letters written by Mihrimah Sultan indicate that she was well-educated and disciplined. She was sophisticated, eloquent and wellread.

Like all princesses of the Empire, once she reached the age of wedlock, a compatible suitor with a bright future was chosen for the only daughter of the sultan: Rüstem Pasha, the governor of Diyarbakır. Their glamorous wedding took place in 1539.

Rüstem Pasha is one of the wealthiest personalities in the history of the Ottoman Empire.

There is a colossal book with a record of his entire wealth on display at the Topkapı Palace. He was well-educated and had a keen interest in writing about Ottoman history. His splendid library consisted of over 5,000 literary works. He wasn't fond of poetry and disapproved of poets, hence he was satirized many a time. His frugality was regarded as stinginess.

Upon his marriage to Mihrimah, Rüstem Pasha became the grand vizier to the Sultan at the age of 44. Serving two terms and becoming the longest serving vizier, he proved himself with his intelligence and diligence. Like a democrat, he worked independently. Even the Sultan wouldn't interfere in his business. This complaisance led to jealousy and hence, to an increased number of enemies. He passed away in 1561.

Mihrimah Sultan wasn't the representation of conventional beauty. Instead her charm lay in her remarkable intelligence and good nature, which is how she got along well with Rüstem Pasha whose jealousy was known by all. Shortly after her wedding she developed a rheumatoid-like condition and spent most of her life dealing with the illness.

She gave birth to a boy and a girl.

Mihrimah Sultan was loved dearly by her father who valued her opinions. Following her mother's death in 1558, she became advisor to the Sultan. She acted in capacity of "Valide Sultan" (Mother Queen). Throughout her life, she had a say in many state affairs. She encouraged her father to embark on a campaign to Malta for which she had 400 galleys built at her own expense. Her congratulatory letter to the King of Poland upon his accession to the throne till this day remains preserved in Poland's archives. She continued to act as advisor to her brother Sultan Selim II who ascended the throne following their father's death in 1566.

Like mother like daughter, Mihrimah became known for her piety and benevolence. She was the wealthiest woman of the century, often loaning money to the treasury and spending her wealth on charity and good deeds. The poor people she helped comprised the majority of those who grieved her death. The repair of 'Ayn Zubaydah, the spring in Makkah, the establishment of a foundation to supply wrought iron to the navy were among Mihrimah Sultan's contributions to the Empire.

Mihrimah Sultan's most famous foundations are the two mosque complexes in Istanbul that bear her name. She commissioned her father's chief architect Sinan to build them at the two entrances of Istanbul; one across the Üsküdar pier and the other in Edirnekapı, at the western wall of the old city, on the highest of Istanbul's seven hills.

The twin minaret mosque complex in Üsküdar, a prominent landmark, consisted of a mosque, a madrasah, a soup kitchen to feed the poor, a clinic and a primary school. With the exception of the mosque, the primary school, library and madrasah are currently used to serve as an outpatient clinic. The mosque in Edirnekapı consists of a fountain, madrasah and hammam. Unlike its namesake, it features a single minaret.

The mosque endured damage during the 1714, 1894 and 1999 earthquakes. Turkish poet Rıza Tevfik Bölükbaşı visited the Mihrimah Sultan Mosque during World War I and upon seeing it in ruins, he wrote a heart wrenching poem. The poem, one of Bölükbaşı's best works, touched the hearts of many, leading to a decision to restore the mosque. While the mosque was first built in three years, it took 12 years to restore. The mosque has been reopened to the public only very recently.

When Mihrimah Sultan passed away in Istanbul in 1578, she was buried in her father's mausoleum rather than in one of the mosques she had built. According to a recent enchanting story, it was love at first sight for architect Sinan.

He saw Mihrimah while she was accompanying her father during the sultan's Moldova Campaign.

To impress her, Sinan built a bridge spanning the Prut River in just thirteen days. He asked for her hand in marriage only to have his proposal rejected by her father. He in turn poured his heart into his architecture. He built the Mihrimah Sultan Mosque in Üsküdar to resemble the silhouette of a woman with her skirt sweeping the ground.

Meanwhile, the chandelier inside the Mihrimah Sultan Mosque in Edirnekapı and the engravings on its minaret were designed to depict the image of a woman with her hair falling down to her heels. Both mosques were built based on very precise calculations of sunrise and sunset. On March 21, Mihrimah Sultan's alleged birthday, while the crimson red sun sets behind the single minaret of the mosque in Edirnekapı, the moon simultaneously appears between the two minarets of the mosque in Üsküdar: Mihr ü Mah, the sun and moon. Hence, the masterpieces he built for Mihrimah Sultan are believed to be a reflection of the great architect's undying love for her.

This delightful story is nothing but a figment of the imagination. It is from a recent novel. There are no historical evidences or even a rumor in this regard. It is unbelievable that the 50 year old architect, who is also married, saw Mihrimah and fell head over heels in love. Let alone, taking the women of the Ottoman dynasty along on campaigns is unheard of. Besides, how is it possible to know the day and month Mihrimah Sultan was born while even the year is uncertain?