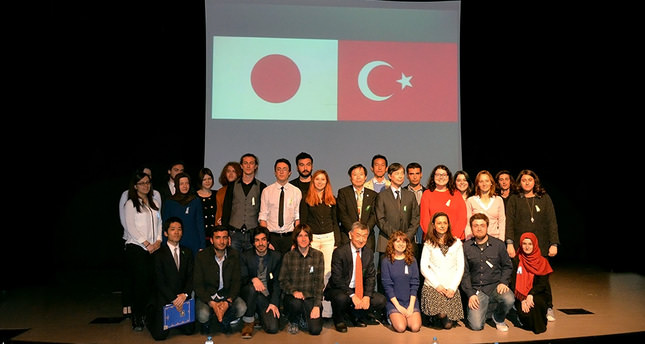 Bahçeşehir University hosted a competition where Turkish natives tried to outdo each other in their fluency in Japanese. This year, the two winners will travel to Japan courtesy of the Turkish Airlines

ISTANBUL – The lecture hall of Bahçeşehir University was filled with supportive family, friends and teachers as the 23 Turkish-born competitors anxiously waited to take their turn on stage at the 23rd Istanbul Japanese Speaking Competition, held on March 16. Students were divided into two groups, 12 beginners identified with yellow ribbons on their chest and 11 advanced wearing blue ribbons.

The students competed for first prize, a return trip to Japan compliments of Turkish Airlines.

Students were assessed in three separate categories: speech, speed and ability to respond with fluency. Additionally, the competitors presented a two-to-four-minute presentation on a topic of their choice and answered questions posed by the judging panel which included honorary guests such as the Chairman of the Istanbul Japanese Speech Competition Mariko Shoshi Erdoğan, the Japanese Consulate General Keiji Fukuda and the President of Japan Society in Istanbul Hiroshi Miyoshi. Upon paying respects to both countries by standing proud for the national anthem, Onur Kanan took the stage with Erdoğan as she introduced the event and Kanan interpreted. A fourth-year student at Boğaziçi University studying Bachelor of Translation and Interpreting, Kanan says his interest in the Japanese language originated due to his admiration for the culture's discipline. "The Japanese culture is one that revolves around respect," said Kanan. "Respect for oneself and the one before you and this is evident in the manner in which one is greeted, with a bow. Japanese people are very intelligent and hard working. I have always shown an interest in shinkansan technology and hope to get into the industry someday." Kanan was among the fortunate few who had the opportunity to study at Shizuoka University in Japan for a year through an exchange program. "This opportunity allowed me to immerse myself in the culture and language and enhance my communication skills in Japanese," he said. "Pronunciation and fluency is very important. I also expanded my circle of friends. Japanese people are so helpful. When I first arrived I was a little nervous, but everyone was so welcoming. Even the staff at the university canteen knew me personally by the end of my trip."

The Turkish Japanese speaking competition is held annually. In order to qualify for the competition, one is not required to be a native speaker of the language or have lived in the country for longer than a certain period of time. Nazife Kara, a second-time competitor, joined the competition once again with her speech titled "The Sword is the Soul" and said it was a very "intense" competition.

Held annually in Istanbul, the competition allows young enthusiasts to challenge themselves and build confidence. After numerous speeches, lots of questions, sweaty palms and hopeful eyes, a winner from each category was announced. Oğulcan Göktürk, with his speech "It's not a Problem" won in the beginners' category and Kıvanç Yazan, with his speech titled "2020 Summer Olympics" from the advanced category took the stage to claim their prize as the audience applauded their achievements.