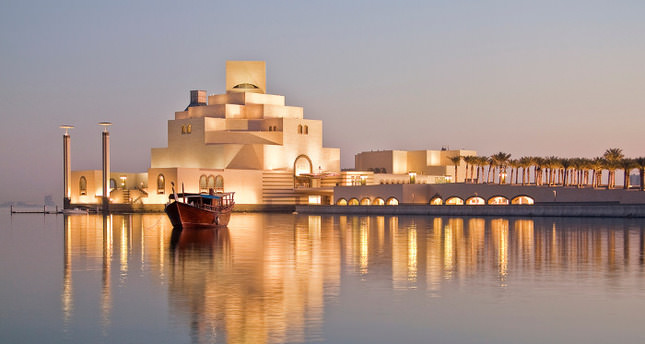 The Museum of Islamic Art (MIA) in Doha, Qatar contains valuable artifacts from three continents. With the purpose of promoting an understanding of Islamic art and culture, the 45,000 square meter museum was built by the Turkish Baytur Company.

"The ancient adage that one sees only what one knows is particularly appropriate in a museum that seeks to sensitize visitors to the beauty, vibrancy and complexity of its collection by eliciting a sense of the deeper, historical picture," said Joachim Gierlichs, the curator of the Museum of Islamic Art (MIA) in Qatar.

Under the patronage of Sheikha Al Mayassa bint Hamad Al Thani, the chairperson of the Qatar Museums Authority, the MIA has become one of the foremost museums of Islamic art, as well a center for education and learning in the field of Islamic art. An iconic feature of the Doha skyline, the MIA represents the full scope of Islamic art from three continents over 1,400 years. "The Museum's mission is to promote an understanding of the high achievements of Islamic culture through works of art of the highest quality," said Sheikha Al Mayassa bint Hamad Al Thani.

The museum, located in the Qatari capital Doha, was constructed by the Turkish Baytur Construction Company on an area of 45,000 square meters and designed by Ieoh Ming Pei, commonly known as I. M. Pei, a Chinese-American architect often called the master of modern architecture. Pritzker Prizewinning architect Pei, who at age 90 had travelled across much of the Islamic world studying its architecture, was inspired by Islamic buildings such as Ibn Tulun's mosque in Egypt and the Al Hambra Palace in Spain. "The Museum of Islamic Art is more influenced by the mosque of Ibn Tulun than any other building. This mosque is very austere and beautiful, and features the most refined geometry. What inspired me the most was the small ablution fountain in the middle of a large courtyard. That little building is a poem," said I.M. Pei.

Visitors are invited to make a journey from the early Islamic era in the seventh century to the beginning of the 20th century, and from Spain in the west to China in the east. The masterpieces of Islamic art displayed in the MIA include metalwork, woodwork, ceramics, jewelry, textiles, coins, glass, calligraphy and manuscripts.

There are plenty of important objects from Turkey too. The most amazing piece is an extraordinary copy of the Dala'il al-Khayrat featuring both calligraphy and highly accomplished illumination.

It was made in Istanbul and is dated A.D. 1216 (1801). The Dala'il al-Khayrat is one of the most successful and favored kinds of prayer books in the Islamic world. It reads as a long litany of blessings for the Prophet Muhammad.

It was written by the Moroccan mystical activist Abu Abdullah Muhammad Ibn Sulayman al-Juzuli, who was expelled or killed by the governor of Safi as his followers began recognizing him as the long-awaited Mahdi. The copy of the Dala'il al-Khayrat was signed by both the calligrapher and the illuminator. The calligrapher was Muhammad Amin, who was a teacher at divan-ı humayun, the imperial chancery. The illuminator's name was Mehmed Nuri, who was well known for his work with other calligraphers.

In one of the manuscripts of Dala'il al-Khayrat, the double images of Ka'ba and Rawdah (Mecca and Medina) come directly after a passage that reads: "This is the depiction of the blessed garden in which the Prophet of God, peace be upon him, was buried with his two companions, Abu Bakr and Umar, with whom God was pleased."

The text also refers to a fourth tomb, presumed to be that of Jesus Christ.

Another masterpiece from Turkey is a ferman, or imperial decree, of Sultan Süleyman the Magnificent, one of the greatest Ottoman rulers.
This three-meter-long scroll, written in Ottoman Turkish, concerns the grant of a palace in Istanbul to the granddaughter of the Sultan. It was dated Ramadan A.D. 944, 1538 B.C. Fermans such as these are written in diwani script, the official Ottoman chancery script. They begin with the tughra, the ruler's signature. This design comes from the sultan's hand-sign (thumb and three fingers) but evolved into an elaborate and abstract calligraphic shape, illuminated in gold and blue.

Other than these two masterpieces there are plenty of other objects from Turkey such as coffee-cup holders, a navigational chart of the Mediterranean Sea, silk cushion covers, mosque lamps, colorful ceramics and tiles produced in İznik, armor for horses and riders, turban helmets in silver and steel inlay, pen boxes made of wood and mother of pearl, Quran pages, calligraphic compositions on natural leaves in gold, coins made during the reign of Mustafa III, Three Star Holbein carpets made of wool, candlesticks, Qibla indicators and compasses, astrolabes and even scissors and pen-cutting slabs. You can find so many different masterpieces from all around the Islamic world, from al-Andulus - Islamic Spain - to China. "The objects represented in the museum are all very different. Not only do they encompass various materials but they also reflect the broad regional variations and time spans. However, they are exceptional examples of their kind," said curator Joachim Gierlichs. If some day you happen to pass through Qatar, a visit to the MIA is highly recommended for a great journey through the history of Islamic art.