Celebrate with sweets all year round 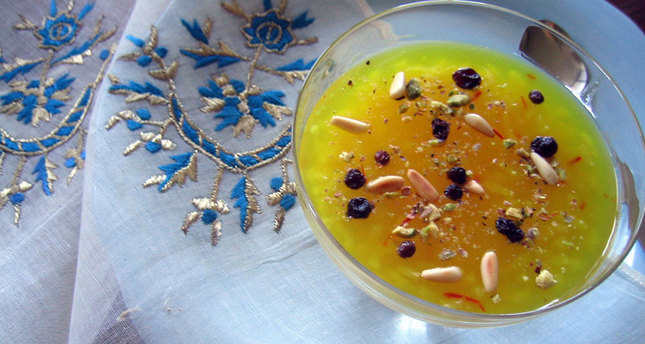 There are different traditions in the preparation and serving of Turkish desserts. Certain sweets mark the occasion of important events within the year

ISTANBUL – In Turkish culture, desserts are known as the sultan of meal tables.

Even if you are full, you may wish to eat dessert. Deserts are generally served to guests. This is because they had taken an important place in Turkish etiquette under the Ottoman Empire. There are different traditions in the preparation and serving of desserts.

In Turkey, the most famous taste for religious holidays is "baklava" (a special type of sweet pastry). Baklava draws its origin from either Arabic or Turkish culture.

While baklava is mainly prepared with peanuts in Damascus, Syria, Anatolian people prefer to make it with nuts. The second most well-known tradition in religious holidays is to offer candies. "Akide şekeri" (akide candy) was used to be prepared by the Janissaries. In the Ottoman language, "akide" means fidelity. It was a symbol of janissaries' loyalty and obedience towards the Sultan. Additionally, akide candy was used to be given as a present to new couples or people who buy a new house or open a shop. There were different types of akide candy including with hazelnuts, rose or violet extract, cinnamon, sesame or carnation. They were used to decorate the shop windows in colorful glass sugar jars. Haci Bekir's shop at Bahçekapı and Hafiz Cemil's shop at Şehzadebaşı were among the best places to taste akide candy. At that period, these two became the world-wide famous confectionary shops.

Similar to akide candy, "mevlid şekeri" (mawlid candy) is a small type of mint candies. The mawlid candies were used to serve to the people at religious ceremonies.

Traditionally, people do not eat these candies until the ceremony is over. This sugar is a symbol of fertility.

Before chocolate was become popular, akide candy is the most consumed confection in the Ottoman Empire. The second most well-known dessert was "lokum" (Turkish delight). In Arabic language, "lokum" means "râhatu'l-hulkum" (comfort of the throat). As generally known, Turkey is also famous for its Turkish delight.

Turkish delight is a type of confection based on a gel of starch and sugar. They are mostly eaten in small cubes. There is a variety of different Turkish delight such as with rose extract or hazelnut. This confection was introduced to Europe through the European ambassadors visiting the Anatolia. Turkish delight has now become a world-renowned brand. "Hope everything is well. Is today a religious day?"

Halva is generally served when people visit someone's home for extending condolences in Turkey. It is believed as a good deed among Muslim people.

There are two different types of halva including flour and semolina halva. Flour is fried in oil and mixed with water and sugar. It is also possible to add milk, which will brighten its color. Semolina halva is usually made with wheat semolina and peanuts.

Kenafeh is known as a cheese pastry cooked in wedding ceremonies. It is made of dough with nuts and cream. The word kenafeh comes from "katâif " meaning thread in Arabic language. There are special knifes to cut kenafeh.

Served on important religious days, Lokma is another sweet pastry made of deep fried dough soaked in sugar syrup. If you serve lokma to your neighbor on an ordinary day, they may be surprised and say "Hope everything is well. Is today is a religious day?" The famous Ottoman Turkish lokma is made of albumen. There are various other desserts including hanımgöbeği (lady's navel), dilberdudağı (lady lips), and vezir parmağı (grand's vizier finger).

Güllaç is a traditional Turkish dessert mostly consumed in Ramadan. It is a special kind of pastry made with starch dough and nuts. You can pour either milk or rose water on it. Today, Güllaç is also made with banana or peach. However, it is not recommended to make it without rose water. Güllaç is actually the combination of two words "Güllü" and "aş", meaning "food with roses" in the Ottoman language.
Zerde is another Turkish dessert made with rice and starch. It is served at wedding ceremonies or other important meals. In Farsi, "zerd" means yellow.

This is because it is colored yellow with saffron.

Grinded in the large mortars, Maraş ice cream has become a Turkish brand. Its main ingredients include milk and salep. It is generally eaten in summer, but can also be served in winter.

Aşure (Noah's Puding) is served during the first month of the Islamic calendar, Muharram. According to the historical accounts, it is claimed that when Noah's Ark came to rest on Mount Ararat in northeastern Turkey, their supplies were nearly exhausted.

What was left (primarily grains and dried fruits) was cooked together to form a pudding, what is now call Noah's Pudding. It is decorated with nuts, almond, pomegranate or cinnamon.