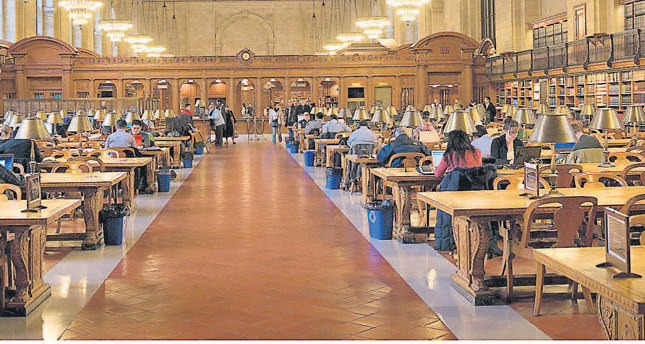 NEW YORK – The New York Public Library houses 53 million items and is the third largest library in the world. There are two public libraries on Fifth Avenue in New York. Indeed, the one slightly more uptown building is the flagship; a glorious building with decorative ceilings that attracts a large number of tourists.

But the mid-Manhattan public library is in a more modest building, with no lions outside beckoning one to enter. As you enter through the doors, the atmosphere hits you immediately. Voices are hushed; people walk quietly, while others glance through the books. The services offered were obviously popular on that cold Sunday afternoon. Study, read, browse, investigate or find warmth. This is what the public library offers. As a child, it was always a friend; a comfortable place to read, study and find books.

I looked for a place to set up my computer, examining the tables on the first floor; but the flow of traffic, the people coming in and out was too distracting. On the second floor, the tables were full, indeed overflowing. The third floor was not any better. Finally, on the fourth floor I found a quiet corner. I took out my laptop and placed it on the wide wooden table; switching the computer on, I immediately connected to the free Internet. I pulled up a solid wood chair and sat down to work. Taking a look around me, I immediately felt at peace among the rows of books. Being surrounded by knowledge and information in a number of languages was comforting. I could stand up and pick up any book I wanted; leaf through it and put it back. Suddenly the peace was disturbed by a muffled snore. A man a few tables away, his face buried in his winter jacket, had fallen asleep. The woman next to me was obviously annoyed by the snorer, muttering under her breath. Her muttering was more disturbing than the sonorous rumbles of the sleeper. Perhaps he was homeless, and had found a warm place to sleep. Or he may have been driven out of the house by his wife, who wanted him out from under her feet while cleaning. Whatever the reason, rather than choosing to go to a bar or a café, he had chosen the library and while reading and taking notes he had fallen asleep. A small thin man came scurrying in. His trousers were at least two sizes too big for him, held up by an old belt. He pushed up his sleeve to scratch what were clearly flea bites. His hair was long and stiff with dirt and grease. He clutched three large books to his chest. Dropping them quickly onto the table, he took out a notebook and started to scribble something, not bothering to sit down. Darting back and forth to the stacks, he pulled out new books and made more notes. I don't know what he was researching, perhaps some conspiracy theory, perhaps a law case, perhaps a thesis paper. It didn't matter. His mind was clearly flying with energy to get more information. The man across from me fell into the web woven by the snorer. His head was nodding, falling deeper into his thick winter coat. Slowly the inevitable grumble grew louder, and another snorer joined the chorus. Suddenly the guard was there. He gently knocked on the desk, careful not to touch the man himself. The snorer woke up with a start. "Read, don't sleep, friend," the guard whispered. He went over to the other snorer and did the same. The smell of under-washed people permeated the air. However, although unpleasant it was acceptable. This was a library, a public library; open to all. Who am I to complain that the hygiene standards of the people are not to my liking? In the true American spirit, the door is open to all; there is no screening, no saying: "No you cannot come in, you are not dressed correctly, you do not have the right lifestyle, you do not have the correct beliefs." This is a truly democratic space. The books are equally democratic. One man was reading Chinese, another Spanish, another about the Third Reich; accurate, inaccurate, old, new, popular, scholarly, the shelves had room for it all.

After a few hours of productive work, the intermittent snoring began to take its toll on me. Fearing that I would hear a gentle tap on the desk and the whisper of "Work, don't sleep," I packed up my bags and headed out into the street, thankful for a few hours of peaceful reflection.

My week in New York City was a reminder that people from all over the world and from all walks of life can sit side-by-side, talk, share and understand.

The conclusion that what is needed is communication and understanding between countries and individuals is in no way profound.

From the UN to the New York Public Library

On my first day in New York I went to get my pass to attend the Commission on the Status of Women (CSW58). I stood in line for three hours in the wind and snow in order to get a pass. Chaffing my frozen hands, I finally made my way into the office and joined the first queue where a guard gave my credentials a cursory lookover and scribbled something illegible at the top of the paper. Then I joined a second line where a lady looked over my documents, scrutinized my face and finally asked me to stare into a camera. At the very moment I grimaced and blinked, my photograph was taken. Within seconds, a blue pass with a picture that bore no resemblance to me was placed in my hand. The beauty of this hideous photograph was that it got me into the bowels of the United Nations, allowing me to attend a number of side events during the commission.

The side events were run by a great variety of countries, from Afghanistan and Sweden to France, Mexico and Ghana. This proved to be a fantastic opportunity to literally rub elbows with women - and the occasional man - from all over the world. The first event I attended was in a large auditorium and by the time the event started there was not an empty seat. Everyone had notebooks, electronic or the more old fashioned type, and everyone was taking notes. In the row ahead of me an elderly woman who took out her knitting work and in between note taking she knit and pearled - living evidence that women are indeed multitaskers. In the hallways, women in brightly colored African batiks walked by, their winter coats making for an odd combination. There was a myriad of colors, styles and fashions. I made many friends immediately; from Somalia, Iran, Afghanistan, and the United States - there was that inevitable exchange of business cards, emails, and enquiries about the situation in one's own country. One 15-year-old American girl handed me her card, which read "presidential hopeful, activist, writer." At the events she asked questions like "What do you think the future of the women's movement is; has it not been taken over by the elite, with universities being built in countries where secondary and even primary schools are lacking? How can a movement that is not run by the grass roots make real change?" I believe this girl is truly a future presidential hopeful.
While eating lunch in the cafeteria, I was surrounded by different sounds and smells. At the table next to me people were speaking Arabic, while at the one behind me everyone was speaking English, and at yet another, translators were switching between languages. People were working, laughing and discussing in a harmonious cacophony of languages.

It was a week of inspiring lectures, interspersed by dull, self-promoting talks. I learned a great deal about how women in the rest of the world function, or try to function. However, for me the pinnacle was while walking down the hall I heard someone shout: "Libya! Somalia!
Where are you? Hurry up! And do you know where Morocco is?"