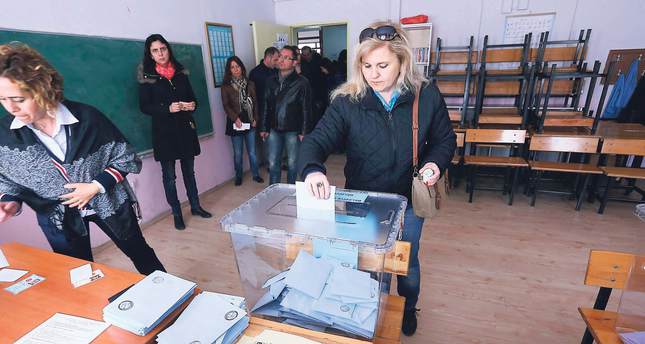 On Election Day, I was asked to go to three different districts in Istanbul: Zeytinburnu, Sisli and Besiktas. For those of you who are familiar with Istanbul, you will understand the difference between these areas. For those of you are not, bear with me, it will all become clear

ISTANBUL — I first went to Zeytinburnu, accompanied by my daughter, who turned 18 one week before the election.

She HAD cast a vote for the first time in her life and now wanted to see democracy in action, to understand what happened next. We went to the first school being used as a polling place. The interesting thing about Zeytinburnu is that there are four to five schools in one block, back-toback, side-by-side. It certainly made our day easier. The fact that all these schools were together on one block meant that there was a huge crowd of people, coming and going into the schools to cast their votes. There were many people waiting in lines to vote. They milled around, trying to find their ballot box. On each floor volunteers were helping to guide people to the right room. There was a diverse mix of people, from a variety of backgrounds waiting in Zeytinburnu.

All waiting and wondering. There were the occasional moments of drama. Two people HAD cast votes in two different boxes. Intentionally or not, this had to be solved. The lawyers on duty came and put their heads together to come up with a solution. IT did not take long to find a solution, but I am sure from the amount of discussion, the respectful nods and the hemming and hawing that it was done in the fairest way possible.

In another school, three elderly people made their way to the door. One gentleman, supported by his cane, slowly and painfully made his way up the stairs. People respectfully cleared the way for him. Another elderly lady, round and cheerful, but not very mobile, was being helped by two younger women, one on each side. Again the crowd made way for her. The third was an elderly woman, engulfed by a massive wheelchair. She had to go to her ballot box, which was one story down. Five young men put all their efforts into carrying the chair down the stairs to make sure she could exercise her democratic rights. The determination of these elderly people caused me to think again about how lightly we take this democratic right.

The people in Zeytinburnu were, for the most part, not well off but the streets were humming and buzzing. People were greeting each other, smiling and laughing. They had cast their votes, their voices HAD BEEN not were heard.

My daughter, having grown up in what is basically an overgrown cul-de-sac, was fascinated by the neighborly atmosphere and just a little envious.

Our next stop was Sisli. We got out of the taxi in front of a high school. The crowds were different. There were more complicated hairstyles and heady perfume. The walkers and shopping carts were replaced by pampered dogs and pushchairs. The second school was even more interesting, apparently in the heart of an area where transvestites preferred to live. My daughter was once again fascinated.

Walking down the calm and quiet streets of Sisli, she commented that it had the air of a major city in the West. Calm, people walking and minding their own business. The vibrancy of Zeytinburnu was not here. The streets were quiet and actually rather boring.

We then went to Besiktas. The streets were crowded with young people, bumping and jostling one another as they flowed through the narrow lanes. Our destination was a school, any school in which there was a polling booth.

When we finally got to the first school, all was calm and quiet. Everyone was tired. It was the end of the day and there was no tension, no worries.

In general, the impression we received on that day was that representatives from different areas, different parties had no problems with one another. Indeed, often we found them drinking tea and chatting together. One friend told me when counting the votes, most were marked for the AK Party. The CHP monitor drew a deep breath, sighed and said, "I'm not of much use here, am I?" They all laughed.

No resentment, no hard feelings.

There were areas were tension was high. These tended to be hotly contested areas. However, the resentment and anger that is being drummed up now, after the event, can only be the result of ulterior motives. On the day, at the ground level, there were problems, but there was also laughter, camaraderie and dialogue between different groups. The constant accusation of cheating, of the need for recounts and the polarization created a negative energy that was not seen in many regions of Istanbul on the day of the vote.

Turkey has a chance here to put an end to polarity, to bring an end to the "us" and "them" utterances. I am not blaming any one side. But I am dismayed when I see respected journalists expressing sentiments such as, "We lost." Sorry? Your candidate lost. Your party lost. But "you" did not lose. You still have a local government. If you want to ensure that it will represent what you want, then make your voice heard in the legitimate places, in the city council, in consultative meetings. There will be councilors who represent your views. Make sure they do.
Arrange lobbying groups and lobby. Do not incite people to feel they have been sidelined or cheated. This was a fair election and all debated results are being recounted to ensure complete fairness. The same journalist claims, "They are with the prime minister. We are on our own." This is a dismal depiction of the situation. If this is a genuine sentiment, then truly this is a sad state of affairs. Rather than encouraging people to enter into a relationship with the government, to exercise their rights, they are being told, "This government does not represent you. It represents them."

Turkey has all the instruments of a representative government.

The problem that everyone has pointed out is that the opposition is weak. However, it is time that people stopped blaming the winner. They need to establish a strong opposition. They should start lobbying, establishing NGOs and put pressure on the local government rather than taking to the streets and destroying public property.

Let's try to capture the spirit I saw in those three districts on March 30. We are in this together and this is the reality, whatever the result.