Justice falls victim to the coup 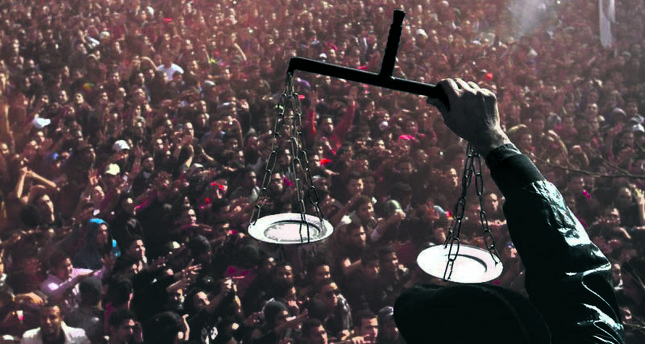 Since the coup that toppled the country's first democratically elected President Mohammed Morsi, the public trust in Egyptian justice has taken a nosedive, with the latest death sentences meted out against 529 prodemocracy activists

ISTANBUL — Egypt was among the first countries in the region that established modern judicial institutions in a European sense, but today Egypt is a nation that is thirsty for justice in whatever form. Tension is boiling in Egypt over one of the country's recent high-profile court decisions which ordered that 529 pro-democracy supporters be sentenced to death following violence that broke out in the southern city of Minya last August.

Not long after the verdicts were delivered, security forces clashed with hundreds of students at Minya University protesting against the trials, leading to more causalities and increasing the number of detained protestors, that is said to have reached 22,000 since the July coup that ousted former President Mohammed Morsi.

A judge decided after the second hearing to refer 529 defendants to the country's chief Islamic authority, the Grand Mufti, for a possible death sentence without allowing lawyers to offer a defense or witnesses to attend. "This verdict is ridiculous" Prof. Seif Abdul-fattah, a former president advisor to Mohammed Morsi told Daily Sabah. "The whole confusion between whether the number of defendants is 528 or 529 is said to be because the lawyer who objected the court's decision was added to the list of execution!" he added.

The Muslim Brotherhood issued a statement saying the sentences "violated judicial norms," while it was noted by some of its members that only 21 of the 529 sentenced belong to the Brotherhood. "The judge called on only 60 names or less during the court session before he sentenced all of them to death. Some of the names sentenced were already dead since the Rabia massacre. This is absurd," Abdel-fattah said.

Only 147 of the defendants were reportedly in court with the rest tried in absentia.

While hundreds of people face possible execution, regime figures from the government toppled in 2011 remain standing trial until this moment.

In 2012 Mubarak and his sons were cleared of corruption charges, setting off protests for greater accountability following 30 years of abuses under the old regime.

The former president received a life sentence for failing to stop the killing of protesters during Egypt's uprising but Mubarak was freed after a Cairo court ordered his release.

Prosecutors said they would not appeal. He is currently being treated at a military hospital in southern Cairo after being acquitted of charges on appeal.

Meanwhile, three of the liberal figureheads of Egypt's 2011 revolution have been jailed for three years. The founder of the April 6 Youth movement - established in 2008 against Mubarak's regime - Ahmed Maher, member Mohamed Adel and long-time activist Ahmed Douma were sentenced to three years in prison, after they were found guilty of assaulting security forces and staging an unlicensed protest outside the Egyptian prosecutor-general's office in downtown Cairo last November.

Maher, Adel and Douma were among the young activists who led Egypt's January 2011 revolution and also supported last year's June 30 demonstrations against Mohammed Morsi, later joined the opposition against the coup.

U.N. Secretary-General Ban Ki-moon has expressed his "strong concerns" over mass death sentences during a meeting with Egyptian Foreign Minister Nabil Fahmy in Brussels, while International bodies and human rights groups denounced the ruling as a grotesque example of the shortcomings of Egypt's justice system, raising concerns over the three defendants who were said to be under the age of 21.

The arrested Minya protestors were originally split into two groups to face trial. After the court faced heavy pressure following its decision to hand down 529 death sentences to the first group, the same court postponed the second group trial season for one month, a step that has been seen as a result of international pressure.

"When state institutions function as corrupted bodies, the normal citizen considers it an enemy, eventually he/ she shall object and pressure until they have a clean state. Objection and pressure is a duty in this case," Abdul-fattah stated.

The latest court decisions came before the Egyptian Cabinet announced that it would submit a new counterterrorism draft law to the president for approval. The law is expected to give more power to the authorities and judiciary to fight the so-called "terrorism" as the country remains primed for sustained unrest, so, what awaits Egypt in 2014?
Last Update: May 06, 2014 3:20 pm