A walk through historical Balat 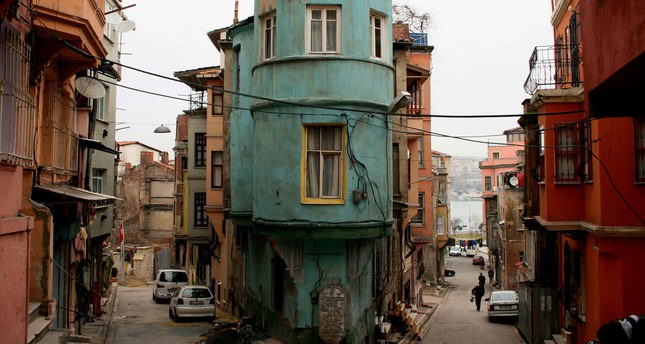 by Daily Sabah Apr 18, 2014 12:00 am
ISTANBUL — On the coast of the Golden Horn, nestled between Ayvansaray and Fener, and first inhabited by Spanish Jews lies Balat.

The neighborhood is home to many important synagogues and churches. The silhouette of the historical neighborhood will most certainly change within the next 10 years under the direction of Istanbul's city-wide renewal plans. We spent a day here in order to better get to know the district. We researched where to eat, what to drink, where to go and what to see.

In order to better acquaint ourselves with the historical and distinctive neighborhood we begin our walk to Balat from Ayvansaray.

One of the first places that cross our path is the Plato Meslek Yuksek Okulu (Plato College of Higher Education).

Students learn skills like photography, graphic design, industrial design, fashion, tourism and cuisine, and it appears to hold a special place in the city's upcoming plans. One of the important points of the area's cultural rejuvenation is the mingling of students with Balat residents. The school was lucky enough to host Spanish artist Felix De La Concha last year.

Concha recorded his inter views with the residents of Balat. Along with this he painted 20 portraits. In June 2013 his portraits and recordings were exhibited and open to the public. According to Plato Art Director Aysegul Cinici Yazici, the most important aspect of his art project was capturing the Balat residents' stories. Properties were taking from the residents hands for a cheap price in the name of urban renewal. For this reason, when municipal workers came to paint the local buildings residents saw this as "smoke and mirrors" and were worried about what may come.

However it is unclear whether or not Balat will be able to escape the modernization that affects most large cities.

With thoughts of gentrification in our minds we continue walking toward the Balat Gate. Other than three or five artist's workshops and around 10 chic cafes there is very little intervention by non-residents. We don't count the fisherman lining the coast as non-locals as they comingle so easily with the Balat lot; they have easy, organic relationships with the residents. It is difficult to find a building higher than two stories in the neighborhood that was established from the coast toward the hills. All of the old homes are painted with bright, lively colors and adorned with flowers. Most of their doors are open. It is an ideal area for the summer heat. Those looking for a reprieve from the sun can sit in the shady streets and enjoy a light breeze from the seaside. Most of the back streets have couches and chairs installed in front of the homes. In the summers people lounge around here.

In one of the areas of the neighborhood many Roma musicians live.

Wandering the streets at night you can hear the sounds of musicians' violins and drums. Balat is also home to many children and scrap dealers that collect paper and recyclables. It is possible to see them in every corner of Istanbul sorting through and carting off recyclables.

Despite the hardships people remain friendly. When we ask for help finding an address everyone jumps up and wants to help. Generally, peace and is the dominant mood of the neighborhood.

The soul of the neighborhood is found in the coffeehouses frequented by locals and tourists alike, the historical Molla Aski Mosque's tea garden, and restaurants catering to tradespeople and glamorizing iskembe (tripe soup). We have some recommendations for those that would like to spend the day a little differently in Istanbul. The best restaurant on the Ayvansaray side is Canak.

It is famous for its kuru fasulye (bean) dish made on a brazier, kofte, and irmik helvasi. It is on the coast, across from the Private Balat Hospital. We continue to walk. A few minutes later we come across the Balat coast's most well-known fish restaurant, Sahil Restoran.

Pickled mushrooms, starflower herbs, and fava beans are some of the famous mezes served here. It must be said though; be prepared to spend at least 70 TL a person.

Many a celebrity stops by the restaurant.

After walking another 10 minutes we arrive at the Balat Gate. Immediately at the entrance we see the 100 years old Balat Iskembe Salonu.
The walls are decorated with old photographs and rifles. There is more to the restaurant than just iskembe, we also recommend the uykuluk (sweetbread of a lamb) and kofte. Directly across from the restaurant there is a newly-opened and very chic café named Afilli Cezve. At the moment the customers are a mix of visitors to the Fener Greek Patriarchate and foreign and local photographers shooting the area.

Walking from the street parallel to the coast, Leblebciler sokak, we continue on our way. Also known as the Cifit Carsi (Cheat Market), this was Istanbul's first Jewish quarter. Unlike the traditional Ottoman markets where there was an exact type of shop according to the street - wool-fluffer street, silversmith street, knitter street, and so on - the shops here were packed with every type of good. Over time the market acquired the name cifit carsi. Today there are still tiny, tiny shops like those of yesteryears. Sadly, most of the shops are empty. According to what the locals say, one or two investors bought the shops here. Antik Kafe is cozy little café at the entrance to Leblebeci Sokak that is a recent addition to the neighborhood.

Inside the coffee some foreign tourists lounge with the owner and a group of students come to take pictures of the place. We suggest taking a break at this cute, little café and catching one's breath over some tea and coffee. In the market area there is another famous iskembe joint established in the 1970s, Fetih Iskembe Salonu.

The day is filled with visits to coffeehouses and traditional eateries.

Although we have eaten our fill and chatted with all the shopkeepers and workers who crossed out paths there is still more to see. Balat is an escape from modern life and an encapsulation of the city's history.
Last Update: Apr 16, 2015 12:02 am
RELATED TOPICS