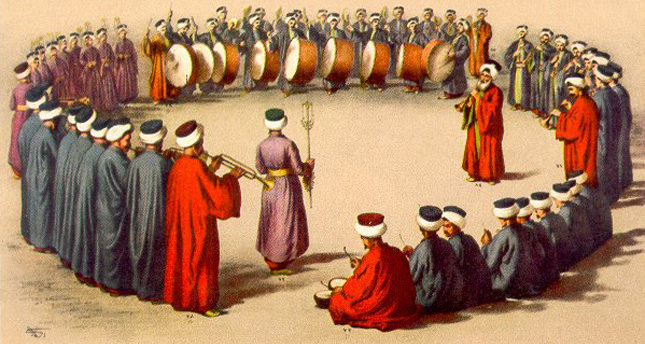 It is well known that Ottoman janissary music inspired European composers. German composer Richard Wagner once said, "That is the real music"

ISTANBUL — In 1289, Seljuk Sultan Kayqubad III presented a bass drum and a plume to Ottoman leader Osman I to salute the newly formed state. On the other hand, a military band is indicative of reign. Military bands motivated the public at a time of peace and encouraged soldiers by demoralizing enemies. In accordance with Mahmud al-Kashgari's historical accounts, there was the "mızıka," which was a brass band, including kettledrum, bass drum, zurna (shrill pipe) and cymbal. At the time of the Ottoman Empire, the military band was called "mehter," which played at a time of peace in the palace and in front of the Sultan's tent during war. The early Ottoman emperor listened to the band while standing to show respect to the late Seljuk sultan.

Mehmed the Conqueror removed this tradition by saying "It is not required to stand up for an emperor who died two hundred years ago."

"Mehterhane" is the house of mehter in the Ottoman Palace. It was situated next to the "meşkhane," the Ottoman music school. The band consisted of 150-200 members.

Due to the fact that there was not much interest from Turkish Janissaries, the mehter mostly included Christians brought up by the Janissaries or converted Armenians and Greeks. The personal mehter of the Ottoman ruler used to perform in front of the "Bâbüsselâm," the middle door of the palace. In the code of Mehmed the Conqueror, the band was supposed to play three times every night for prayer except Friday and in the mid-morning to wake palace residents for prayer. Furthermore, the band played during religious festivals, weddings and the Friday prayer, along with victory and other official ceremonies.

A typical Ottoman mehter consists of five different instruments: one "davul" (bass drum), one "zurna" (shrill pipe), one "zil" (cymbal), one bugle and one "nakare" (a type of small kettledrum).

The personal mehter of the Ottoman ruler contained 90 people with 12 instruments for each component described above. During the battle of Chaldıran against the Safavid Empire, Selim I added the "kös" (a giant timpani) to frighten the enemy. The Janissaries shouted, "God is one!" Each instrument represents a different section.

They would line up in the shape of a crescent. The word "mehter" also derives its origin from that array; in the Ottoman language, "mehter" means crescent. "Mehteran" is the plural form. The mehter team would stand, while the nakare players sat cross-legged. At that time, the mehter did not perform marching music, but played classical Turkish music such as yürük semai, peşrev and nakış. They also recited prayers.

The members of the mehter had a special style of walking. They walked slowly and chanted, "Generous God, merciful God." At every three steps they would stop and turn both right and then left. Their style of walking represents the Ottoman's dignity and caution. The mehter was attributed particular importance as an indication of rule. At the time of Murad VI, there was a protocol disagreement between the chief architecture and the leader of the mehter during a military ceremony. The emperor decided to put the leader of the mehter before the chief architect with regard to protocol. There were even two grand viziers who were previously members of the mehter, namely Zurnazen Mustafa Pasha and Daltaban Mustafa Pasha.

By the end of the 17th century, the leader of the mehter was paid 140 and the instrument players received 0.15 kurush (1 kurush was equivalent to 40 para).

The clothing of the mehter has a distinct beauty. The leading player of each instrument wore a red broadcloth bonnet and "çakşır" (a type of shalwar), yellow morocco leather shoes and red headwear. The other players had dark blue broadcloth, red çakşır, green headwear and red shoes.

European composers, such as Mozart, Haydn, Gluck and Beethoven, were familiar with the mehter's music. Inspired by classical Ottoman music, they composed the best-known Turkish marches such as "Alla Turca" by Mozart. In the early periods of the Turkish Republic, the mehter gave various concerts around the world and attracted a foreign audience. Some newspapers commented on their success with the headline "Ottomans conquered Europe."

When the Janissaries were removed in 1826, the mehter was also dispersed. In its place, a European style "Mızıka-i Hümayun" (military band) was established.

Following the foundation of the Turkish Republic, Defense Minister Zekai Bey abolished the mehter because of its affiliation with the Ottoman Empire. In 1952, the late President Celal Bayar was impressed by the historical Scottish military band at a royal funeral in London. Bayar asked former Chief of General Staff Nuri Yamut to establish a similar band. Today, the mehter is under the charge of the Turkish Armed Forces and performs at the Military Museum in Istanbul. When the mehter was refounded, some music pieces composed before 1826 were not found. Therefore, new lyrics and melodies were added to the repertoire. The Ottoman janissary band still plays at special ceremonies with the players in historical costumes.