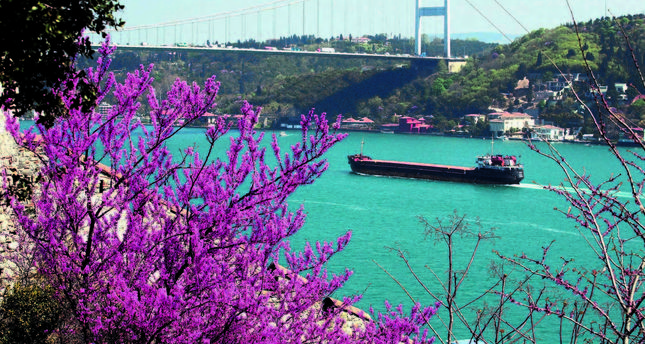 The Erguvan tree is a symbol of nobility and associated with royalty. Coloring both sides of the Bosporus, the Erguvan brings Istanbul to life

ISTANBUL — Last summer when I was in Palo Alto, California, I was walking from my home to the downtown area all along University Avenue, which was dotted with magnolia trees covered beautifully in white magnolias. The avenue's almost 300 magnolia trees blossomed stunningly with lemon-scented white blooms against dark green foliage. Although magnolia trees are not suited to the Palo Alto climate, people insist on growing them.

While enjoying the white corridor I wondered why we don't have beautiful streets like this in Istanbul, flanked by indigenous Erguvan trees. They look like a living work of art, much like magnolia trees. The bright pink-colored blossoms are really something to behold when they are in bloom.

The first time I saw these trees blossoming I couldn't believe my eyes because the flowers bloom from the trunk.

Erguvan is a Persian word describing the color of the tree's flowers.

It is a type of redbud tree commonly known as the Judas Tree and native to Mediterranean and western Asian countries. The flowers and leaves of the Erguvan tree are typically heart shaped and the leaves do not normally appear on the tree until after the flowers have begun to bloom. Although the Erguvan's flowering period is short, lasting just 15 to 20 days, it is certainly memorable.

The Erguvan's history is as long and rich as any other native tree. The Erguvan was a significant tree for different civilizations throughout history. Professor Hasan Doğruyol in his article "Erguvan Üzerine" (About the Erguvan) states that for the Egyptians and Romans, the Erguvan was the symbol of nobility and it is also believed that Prophet Harun (Aaron) wore Erguvancolored clothes of worship and Jesus also wore the same color before the crucifixion. In early Turkish culture it is claimed that Sultan Tuğrul and Sultan Süleyman the Magnificent stayed in Erguvan-colored state tents during battles.

In the same article, there is a reference to Homer's Iliad about how Trojan Hector's bones were wrapped in Erguvan-colored clothes and buried in a golden box after he was killed by Achilles.

Ottomans made walking sticks from strong branches of the Erguvan tree and dressed salads with the tree's flowers for their taste and pinkish hue.

According to another legend, Judas, a disciple of Jesus, betrayed him by defecting to the Roman army and then felt so guilty that he hanged himself off the Erguvan tree. It is said that the flowers which blossomed on the tree after Judas' death blushed and turned from pink to red to signify his shame.

That is why Christians call it the Judas Tree.

The Erguvan tree is unique to Istanbul because there is no other place with more Erguvan trees than Istanbul. Professor Haluk Dursun, the president of Topkapı Palace, says that what the cherry blossom is to Japan, the Erguvan is to Istanbul.

During the Byzantine era, the color of the Erguvan was regarded as the color and the symbol of the empire and its date of establishment corresponded to the Erguvan's bloom. The Erguvan color was only used in the clothes of the empire's royal family because it represented nobility.

The heirs to the throne were born in a bedroom painted in the same color. Princes and princesses were called Porphyrogenitos, which means "born to the purple." People claimed that the royal family were purple blooded like the color of Erguvan trees.

Reading from Evliya Çelebi's itinerary, in the 15th century people from Anatolia visited Emir Sultan, the son-in-law of Sultan Bayezid II, when it was the flowering season of the Erguvan tree. Emir Sultan was well respected and loved; furthermore, he is a descendant of Prophet Muhammed. People would gather around him and the sound of prayers would rise up from the dervish lodge.

Erguvan trees had much importance in Ottoman literature, particularly in Divan poetry which was a highly ritualized and symbolic art form. "Erguvan was the source of inspiration of Divan poetry and mainly mentions lovers' lips, cheeks and faces and also many other various and colorful connotations. It takes its mystical value from the colorful world of Divan poetry because of those characteristics," says Professor Şener Demirel in his academic study "Divan Şiirinde Erguvan" (Erguvan in Diwan Poetry).

In Istanbul, one can see many flowers such as tulips, wisterias and acacias acting as the harbingers of spring, but the Erguvan tree is the real color and symbol of Istanbul. "Of Istanbul the color is Erguvan and the scent is Linden," said Hüseyin Emiroğlu, the chairman of the Erguvan Istanbul Association.

Perhaps not the streets of Istanbul but both sides of the Bosporus have turned pink these days from Erguvan blossoms. For all Istanbul lovers it is highly recommended to take a Bosporus boat trip and enjoy the elegance of Erguvans in full bloom.