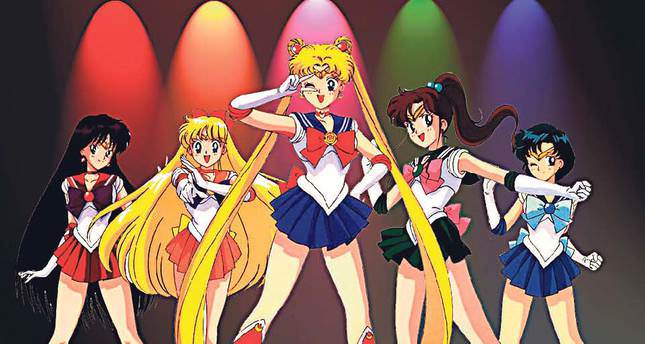 As Japanese animation crosses countries and becomes popular with viewers around the world, people's curiosity is being sparked about animation art

THERE are different techniques to create animation. Many are engaged in the debate on whether American or Japanese animation is superior.What is the difference between the two?

First is the visual look: The characteristics of the characters in Japanese animation, or anime, are different from American animation. The distinctive large eyes with numerous reflective highlights and detailed color are the main characteristics of anime, along with small noses and mouths generally indicated by minimal lines. Eyelashes, hair and clothing are depicted in finer detail to add more depth. In contrast, there's usually less detail in American animation. It focuses instead on using tricks of style to imply the detail in more subtle ways and it pays less attention to shading. Instead, it uses solid block colors save for dramatic scenes. Although American animation may seem to lack in that aspect, it makes up for it in the amount of animation done.

There is a great deal of original animation drawn frame-by-frame in American animation. Japanese animation, on the other hand, uses long scenes in which only the mouth of a character moves during delivery of key information.
Recycling of dramatic still shots against patterned backgrounds with a few moving emotive symbols is frequently seen in Japanese animation. The most significant difference is in content and audience. In the U.S., animation is considered to be for children and is targeted as such. In Japan, animation may be for both children and adults. Also, between the two cultures, there may be a difference on what is considered appropriate for children.

What's appropriate for a seven year old in the U.S. may not be considered appropriate for a seven year old in Japan.Most of that can be explained by cultural differences. When it comes to Turkey, animation has gained popularity.The most obvious reason is Turkish people falsely believed animated movies and films were only for children.However, this belief changed as people became familiar with animation. For instance, Turkey imported a great number of world-famous animated movies, including "The Jetsons," "Spongebob Squarepants," "The Flintstones," "The Simpsons" and "South Park" from the U.S., and "Candy Candy," "Pokemon," "Sailor Moon," "Beyblade" and "One Piece" from Japan. Additionally, a motion picture studio from Turkey got into animation with "Pepee," the most successful animation in Turkey. Targeted for children between the ages of three and six, "Pepee" aims to develop the mind of children and teach them Turkish culture with folk songs, folk dances and poems.

A different subject which develops the personal characteristics of children is covered in every episode, such as sharing with friends, toilet training and basic concepts like days of the week, seasons and colors. Both parents and children are quite happy about "Pepee." Although there are some differences in style and content of all animations, they all seek to tell a story in an animated medium by using both digital and traditional methods.All use exaggeration to emphasize emotion in characters' actions, together with other tricks such as anticipation, well-timed music, and squash and stretch, the purpose of which is to give a sense of weight and flexibility to drawn objects. All follow the principles of animation and require an absolute dedication to the craft. There is no need to really discuss which is better since it's just a matter of preference