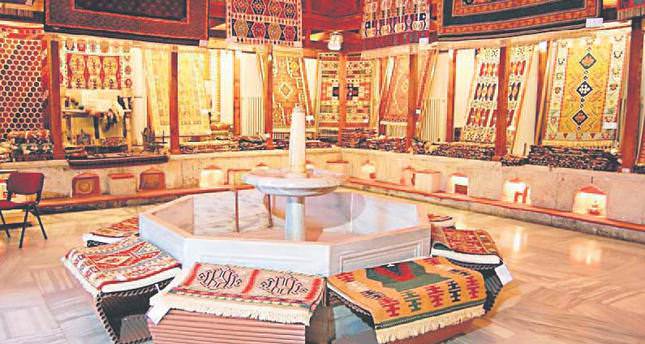 "Bilad ar-Rum [Anatolia] is one of the best places in the world. In it God has united the good features dispersed throughout other lands. Its people are the most comely of men, the cleanest in their dress, the most exquisite in their food and the kindest folk ever created."

Ibn Battuta, a Moroccan scholar was praising the people of Anatolia with these words, in his work "The Rihla."
In those years there were the Seljuks and some other Turkish elite in Anatolia. The bathing tradition was very sophisticated at the time and the hammam or Turkish bath, became one of the most important components of Turkish culture. However, this culture dates back before the time Turks inhabited Anatolia.

"From the sacred springs watched over by the formidable deities of Anatolia's prehistoric past to the modestly beautiful clusters of domes of hammams that grace almost every neighborhood of Turkish cities, baths have become an intimate and inseparable part of Anatolian civilizations.The highland palaces of Bronze Age and Iron Age settlements, such as Hattusa, Aslantaş and Zincirli, had bath chambers with remarkably advanced water supply and drainage systems," says Professor Fikret K. Yegül in his study Bathing and Water Culture of Anatolia.

As a matter of fact, the first hamams were heated internally through a special pipe system built by the Romans. The first known public bath was the Stabia Bath in Pompei. During the Roman period the baths were used as physical training and therapy centers. When the Turks came to Anatolia they first combined their own bathing tradition with the Byzantine and Roman traditions and integrated them with Islamic rules. This included not using the Bath pools which were used by the Byzantians since Islamically still water is regarded as unclean and hence unfit to use for ablution. Thus a new bath culture was born in Anatolia and it was institutionalized later on as the hammam, a term borrowed from the Arabic language meaning "to heat" or "to be hot."

There are some main differences between the Roman bath and Turkish bath. In both, open and closed areas, Roman baths are larger than their Turkish counterparts. The pools in Roman baths do not exist in the Turkish ones. Unlike the Roman Baths, the outer walls of Turkish Baths are not ornately designed. The most obvious difference is the Çifte Hammam (double/dual baths) doors which open out to different streets to prevent women and men from seeing each other.

The first Turkish baths were built by the Seljuks in Anatolia. The Seljuk bath located on the border of Turkey and Armenia is thought to be the first hammam built in Anatolia. When Fatih Sultan Mehmet conquered Istanbul, numerous Byzantinian baths were renovated and used.

During the Ottoman reign Turkish baths became an integral part of the culture. The main reason of this was religion. According to Islam, cleanliness is not only important but also an essential part of the religion. One must keep their body clean for acts of worship. Wherever the Ottomans conquered, they first built a mosque and a Turkish bath. They usually constructed a grand külliye (Islamic-Ottoman social complex) containing a mosque, a madrasah (place of learning) and a library. In order to cover the expenses of the complex a bath was often constructed nearby. But Turkish baths were not only a place for people to clean. It was also a health and entertainment center where people socialized.

Turkish Baths were built in almost every Ottoman city. Integrated into daily life, they were centers of social gatherings, for almost every occasion with traditional entertainment and ceremonies, such as before weddings, holidays and celebrating the birth of a newborn. On these special occasions, homemade meals would be taken to the hammam. Women often brought with them silver bowls and special Cretan soaps made of olive oil.They were also served exclusive drinks and meals such as Turkish coffee, Turkish delight, pickle and boza in the bath. Baths were the only places where the women could socialize out of their houses.Even the wealthiest of women, who had their own private hammams in their houses, would go to Turkish baths.

The architectural style of the Turkish bath has not changed for thousands of years. Sunlight enters the rooms from the brick-dome known as the roof lantern. The hexagonal or octagonal roof lantern is placed at the top of the dome. The domes of bathing places are decorated with circular or star-shaped windows. A typical Turkish bath consists of three interconnected rooms similar to Roman period baths. The warm room which is the intermediate room, is used for the adjustment of the body to the water before getting into hot water. Sıcaklık, the hot room, is the hottest part of the bath. In this section there is a public washing chamber and private chambers known as "Khalvet" and in the center of the hot room there is a heated marble platform called Navel Stone.The Külhan (furnace) which is almost same like Roman system is located near here. The third room, where bathers cool off, is the Soğukluk.

There are two important people that work in Turkish baths: the Tellak (Rubber), who washes the customers and the Külhanbeyi (Rowdy) who maintains the fire to warm up the bath. The story of the Külhanbeyi is interesting. During the Ottoman era the abandoned or homeless children were taken to the baths to be sheltered and saved from the dangers of the streets.

If you ask a foreigner in Turkey what the words Ottoman bring to mind, most of them will say, "Turkish baths." Today there are still authentic hammams in Istanbul and across the country, but people now prefer wellness and spa centers at five stars hotels as opposed to historical hammams. It is so sad that the bathing culture which was institutionalized by Turkish people and is one of the most important components of the civilizations of Anatolia has been lost. Hammams are not given the due credit. It seems ironic that Turks were the pioneers of a culture but at the same time have stepped aside and left it to its fate.