Kindness of a helping hand 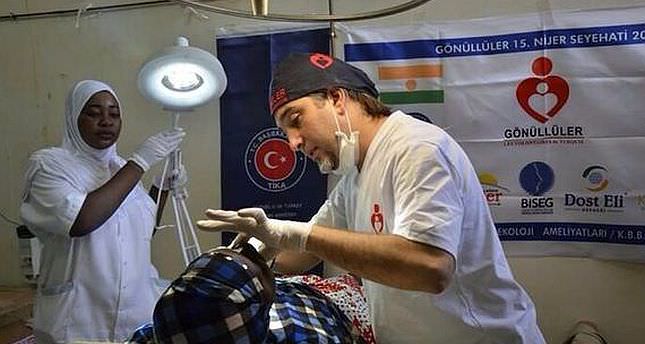 When I was a Iittle girl, meal time was as challenging as finding a solution to world hunger. There were always traces of food on my plate if it hadn't just been shuffled around. My mother would remind me that children in third world countries were dying of starvation and poverty.
Every day the news channels would broadcast images of bodies that had withered to skeletons covered with flies, people with no energy or will to fight for their lives. What a tragic scene that was. I often find myself in moments of solitude wondering whatever became of those people. I have no idea about the aftermath of those children but despite the passing years, the same tragedy is repeating itself on the African continent. However, today everything from transportation to technology, medicine and cures have been developed in comparison to those years, but what about the compassion and the conscience of people as the main subjects of humanitarian assistance?
Thank God there are still wingless angels on earth such as doctors who volunteer to treat forgotten African people.

The volunteer movement Gönüllüler is a goodness platform consisting of a team of doctors who volunteer their time and services in Turkey and numerous other countries suffering from natural disasters, diseases or famine. İbrahim Ceylan, the president of the Gönüllüler movement, defines the organization as a supra-identity, which is supported by organizations such as Biseg and Kutup Yıldızı, İhyader and others from Istanbul and Anatolia.

The movement plays a particularly significant role in offering medical services in Nijer, the poorest country in Africa. Since there are enough health services in the capital city, the team consisting of 26 doctors prefers to work in a province with a population of 760,000 people, located 18 hours from the capital city. There are only three doctors providing medical services to the people in this region.

When the doctors go to Nijer, they operate on people and treat them for diseases that do not require regular follow ups. The common health problems are linked to eyes and teeth. With each trip that the team makes, there are always at least two dentists in the group. Ear, nose and throat problems are also prevalent. Other polyclinic services are internal medicine, pediatrics, urology and general surgery. So far, 79,006 patients have been treated in the polyclinics.

Malaria is one of the major causes of child mortality. Despite the fact that Malaria is a curable disease, if the medical diagnosis is late, it can result in death. As a result of poverty, medicine that should cost $2 ends up costing a person their life. Since there are marshes in the region, the number of mosquitos causing malaria increases quickly. "We recently started a new project to decrease the number of cases of Malaria. First of all, we distributed 1,000 medicated mosquito nets with the capacity of each covering three children and enough medicine for 4,000 children. Secondly, we are going to provide net sewing training so that people can produce their own nets. We are going to supply the equipment and the sewing machines for the people," explained Ceylan.

Beside these medical services, Gönüllüler also supports the people of the region by supplying water wells and goats. The major problem is accessing water: There aren't any water sources in the region and people cannot afford to build water wells. But luckily with the financial support of volunteers in Turkey, the movement provides water for the people by building wells. The cost of water wells varies from $3,000 to $16,000 according to the depth and state of the land. More than 200 water wells have been opened so far and work is underway to construct more.

As a result of poverty and the lack of natural resources, people struggle to survive in Africa. Contributors in Turkey donate funds to Gönüllüler and the organization buys goats in Nijer and distributes them, especially to widows, orphans and the poorest people so they can obtain milk and sell it to earn an income without depending on anyone.

Aside from all these services, Gönüllüler also hosts iftar meals (fast-breaking meals) during Ramadan. "With the price of an iftar meal at a luxury restaurant in Istanbul, it is possible to host 30 iftar meals in a village in Africa. We organized iftar meals in Nijer, Sierra Leone, Chad, Tanzania and Arakan for 12,000 people last Ramadan," said Ceylan.

The organization also organizes events for Eid-al Adha (the feast of sacrifice) by slaughtering animals. The movement tries to encourage people to meet for the chance to eat meat on the Eid day. On average, the cost of an animal is about TL 200. So, people who cannot afford to buy an animal in Turkey have the opportunity to contribute to the sacrifice of an animal in African countries, thereby fulfilling the holiday ritual.

The Gönüllüler movement also built two orphanages last year in Nijer with capacity for 50 children, both girls and boys.

I asked Mr. Ceylan what the reaction of the people was to their group. He explained that they were appreciative of their work and happy to have them there.

They believed the Ottomans had come back to save them. "It was four years ago when we first went to Africa.Children just ran away from us, especially in the rural areas. Then we heard that throughout the years white men had kidnapped these people's grandfathers from their villages and sold them in the slave bazaars,"
Ceylan said.

Nijer was a French colony in the past and the people of Nijer have no good memories of white men as they suffered so much under colonial rule.

Ceylan emphasized that Africa is like a school that one can never define in words or describe with pictures, but once you touch them you can never give up on them. He said he and his team learned so much from the people they worked with, such as patience, living with less, being happy even in poverty and, of course, being thankful.

When asked if he had a message for our readers, he said, "If you want to do something for all these people, come and join us as volunteers.Let's be together with the poor and the orphans of our country and the desperate people of the
world."