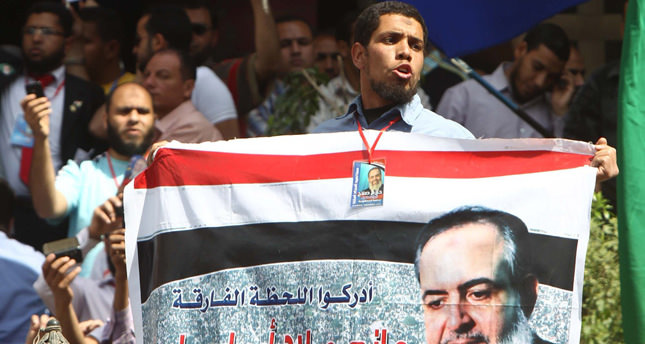 Salafis have supported Sisi against the Muslim Brotherhood. Daily Sabah attempts to reveal the reasons for Salafis' stance after the coup by delving into the two groups' history

A tide of change euphorically called the "Arab Spring" swept across the Middle East and North Africa, mobilizing political groups as well as members of apolitical movements to reveal people's dissatisfaction with their current governments. Following uprisings in a number of Arab countries, Islamist groups have found an opportunity to be involved in politics freely and legally.

In Egypt, the Justice and Freedom Party of the Muslim Brotherhood was successful in the elections, gaining a large portion in the assembly. However, it was not expected that Salafi groups would be politicized, establish the Al Nour Party in Egypt and go on to achieve considerable success in the elections.

Although it was not on the table to discuss the differences between the Muslim Brotherhood and Salafi groups, Al Nour Party's support for former Defense Minister Abdel Fattah el-Sisi, who ousted Egypt's first democratically elected President Mohammed Morsi, has raised eyebrows in the two Islamist groups' dispute. The differences between the parties became obvious when the Egyptian army delivered an ultimatum to Morsi, who was inclined to the Muslim Brotherhood, as Al Nour Party announced that it would support the roadmap that had been drawn by the army. This announcement was surprising and confusing for many people who mistakenly believed that the Salafis and the Muslim Brotherhood were almost identical due to the fact that Salafis were ignored and treated as either Sunnis or jihadist. Another statement issued by the Salafis last Saturday declared their support for Sisi's candidacy.

Salaf means "previous" or "predecessor," and as an Islamic term refers to those who lived either in the era of the Prophet Muhammed or immediately after the death of the Prophet or in the third generation.

Despite the existence of several Salafi groups in Egypt, three groups are particularly prominent: Ansar al-Sunna, the activist Salafis of Cairo, and al-Dawa al-Salafiyya. Ansar al-Sunna was founded in 1926 and has preferred to stay out of politics and focus on spreading the Salafi message. This group, which strictly refused armed resistance, enjoyed the soft stance of the government for being apolitical. Ansar al-Sunna falls into the category of al-Salafiyya al-Ilmiyya. The activist Salafis are more radical than Ansar al-Sunna. This group claims that Egypt is in the era of "jahiliyya" and the rulers are infidels as the laws are made by mankind rather being made upon Allah's rules. Al-Dawa al-Salafiyya was founded in 1976 after clashes with Muslim Brotherhood members due to disagreement on the domination of universities. It appeared as a student movement but gained popularity in a short time. They conduct social activities as well as call on people to purify religion.

After Mubarak was ousted, several Salafi organizations were established like the Ulama Shura Council, which was composed of several Salafi clerics. The council banned its members from direct involvement in politics so that politics would not distract them from spreading the Salafi ideology. However, the members of the council played a significant role during the elections by explicitly supporting Salafi political parties. The Salafi parties, which gathered under the umbrella of the Nour Party, explicitly supported General Abdel Fattah el-Sisi.

M.Z., a Salafi who chose to remain anonymous for security reasons, said the Nour Party does not represent all Salafis but only a small proportion and the party is supported by Saudi Arabia. Some analysts claim that if the Muslim Brotherhood had been successful in Egypt, the international community would have seen an example of moderate Islamist rule, which might have put Saudi Arabia's strict religious jurisprudence on the table. M.Z. added that the Nour Party works as Saudi Arabia's party in Egypt.

Another Egyptian, M.I., who claims to be a member of the Muslim Brotherhood, said, "Salafis are normal people like us. I have Salafi friends who try only to practice the religion in an accurate way and do not get involved in politics.

Yet, the Nour Party, which did not obey the Salafi ideology and banned its followers from being involved in politics, opposes us. Why? What is their purpose? Until now, we did not have any problem with them. They do not have any idea about Egypt's future. They do not have any policy toward the Egyptian economy. What they always repeat is the alcohol ban or the hijab issue. I also care about these issues. But we have bigger problems."

Apart from Saudi Arabia's alleged involvement, the two groups' approach toward Islam plays a role too. The perception of the Muslim Brotherhood on Islamism is comprehensive; it is to explain the Quran, to raise the wealth of people, to unify Muslims, to combat ignorance, to free Islamic lands from foreigners and their allies and to promote peace across the world. The struggle is quite pervasive and includes every aspect of daily life. In order to achieve these goals, the Muslim Brotherhood has not avoided making alliances in politics and being pragmatic.

The Salafi approach to Islamism is different. For Salafis, it is more important to strictly stick to the Quran and the hadith. In the first years of the Salafi movement, the scope of the organizations was limited to charitable activities and calling people to "true Islam." They continued holding this stance until the last elections by claiming that there was no position for religion in the current political sphere. They criticized the Muslim Brotherhood because of their role in politics.

In principle, Salafis refused even discussing democracy, as they consider it to be a Western system and in democracies legitimacy is proven by people rather than Allah, the Creator. However, the existence of democracy is a reality.

Salafis preferred to stay out of politics until they accepted the idea of expressing themselves in the assembly in the last elections. Also, the Muslim Brotherhood is more flexible on their approach of Sharia while the Salafis strictly defend the idea that Sharia must be the only source of law. Another point is that the Muslim Brotherhood recognizes the existence of different political parties that adhere to non-Islamic ideologies. But Salafis believe that although the existence of these political parties is against Sharia, they can be tolerated so that "fitna" (unrest) is prevented.

In conclusion, it can be said that Salafis and the Muslim Brotherhood have not been allied since the beginning. Also, the Nour Party does not represent all Salafis in Egypt, but their political alliance with Sisi is more pragmatic and a political
decision rather than an Islamic issue.
Last Update: May 07, 2014 1:03 am
RELATED TOPICS