The everlasting existence in the absolute non-existence 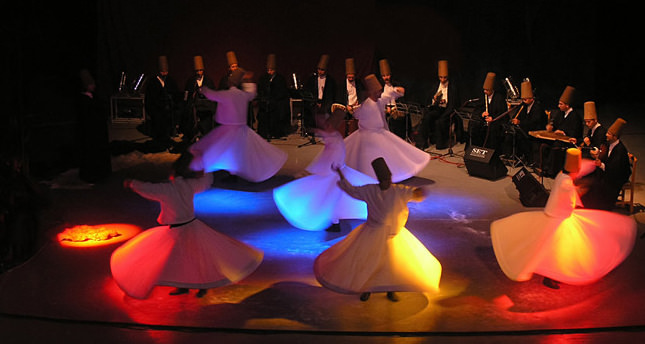 The whirling dervish, better known as the semazen spins from left to right as a symbol of his gratitude to the one who created him

In his case study "Fundamentals of Rumi's Thought: A Mevlevi Sufi Perspective," Şefik Can quotes Mevlana Celaleddin Rumi on the practice of whirling: "Wise men have said: 'We have taken these beautiful sounds and melodies from the whirling of the heavens.

These pleasant sounds that people produce with musical instruments or their voices are taken from the rotation of the heavens. We all were components of Adam. We have heard those melodies while we were in Heaven, although entering this cage of the body made of mud and water and dressing in clay may have caused doubts in our spirits and misled us, we nevertheless still remember some of those melodies. It is for this reason that music and whirling is nourishment for lovers of God. In whirling, there is peace of heart, a connection to God and hope of finding the Beloved.

When we listen to those beautiful sounds, the imagination in our hearts strengthens; those imaginations even take on forms from breath.' "
Every year on Dec. 17, the night of Mevlana's death, thousands of people gather at Mevlana Museum to celebrate Şeb-i Arus, his "wedding day," his reunion with his Beloved, with the Divine. With this celebration, people have the chance to feel a sense of beauty and wonder at loving God, of wanting to be with God eternally. Sema (whirling) rituals are the most important components of Şeb-i Arus performed by the Semazens (whirling dervishes).

Whirling dervishes live in accordance with the order of Mevlevi life, which is based on discipline and rules of conduct where each and every behavior has s a symbolical meaning. The same is true of their costumes. The sikke (head dress) symbolizes the tombstone of the nafs (ego), which is dead. The tennure (white skirt) refers to the shroud and the cloak symbolizes his grave. The semahane (the place where whirling is performed) is the universe; the right side of it is the materialistic world that we see and know of, and the left side is the spiritual world. "The semahane is like a battlefield because man is continuously in battle with the ego," says Cemalnur Sargut, a Sufi researcher and author.

Ritual ablution is a must for the whirling dervishes to clean themselves before the ritual whirling. Here ablution means being in contact with water and thus revival. After being revived with water, man is cleaned and ready to stand before God.

"Part One: The dervish removes his black cloak spiritually born to the truth, he journeys and advances there. At the onset and each stop of the Sema, holding his arms across his body he represents the number one and testifies to God's unity. Sema starts with a eulogy, "Nat-ı Şerif," to the Prophet, who represents love and all prophets before him. To praise them is praising God, who created all of them.

Part Two is a drum sound, symbolizing God's order to the Creation: 'Be.' Part Three is an instrumental improvisation, 'Taksim,' with a reed 'ney.' It represents the first breath which gives life to everything, the Divine Breath.

Part Four: The dervishes greet each other and they repeat their circular walk, which is called 'Devr-i Veled,' three times. It symbolizes the salutation of soul to soul concealed by shapes and bodies.

Part Five: The whirling dervishes open their arms, with the right hand directed to the skies ready to receive God's beneficence. Looking to the left hand turned toward the earth, the dervish turns from right to left around the heart. This is the way of conveying God's spiritual gift to the people upon whom he looks with the eyes of God. Revolving around the heart from right to left, the dervish embraces all of mankind, all of creation with affection and love.

It consists of four salutes. The first salute is man's birth to truth through heart and mind. The second salute expresses the rapture of man witnessing the splendor of creation in front of God's greatness and omnipotence. The third salute is the transformation of rapture into love and thereby the sacrifice of mind to love. It is complete submission, it is annihilation of self within the loved one; it is unity. In the fourth salute, just as the Prophet ascends to the 'throne' and then returns to his task on earth, the whirling dervish reaches the state of 'Fenafillah' (highest grade), returns to his task in creation, to his state of subservience following the termination of his spiritual journey and his ascent. He is a servant of God, of his books, of his prophets and all his creation.

Part Six includes the reading of the Quran and especially of the verse from Bakara, chapter 2, verse 115: 'Unto God belong the East and the West, and whither over ye turn, you are faced with Him. He is All-Embracing, All-Knowing.' Part Seven: Sema ends with a prayer for the repose of the souls of all prophets and all believers and sounds of 'Hu' (a name of God)."

As a matter of fact, there are some conditions of Sema that are related to time, place and company. Sema cannot be done anywhere. It should not be performed on a crowded street, an unclean location, or any place where one's heart will be distracted from God. Sema cannot be done at any time either. It should not be done when a meal is ready, when prayer time is approaching or when there will be a hostile reaction from outsiders.

In addition to this, people attending the Sema ceremony should be cleanhearted and good-willed people, like the descendants of the Prophet. It is not to be done in the presence of people who could undermine the sacred ceremony.

Despite the fact that Sema has these conditions, today it has become a kind of show by some organizers. You can see a single or group of dervishes wearing the costumes and whirling in different types of ceremonies. True Sema is only performed as a remembrance of God. As Cemalnur Sargut says, "Sema expresses the formation of the universe, creation of human beings and their realization that they are servants of God. It also expresses human beings starting to act with love to their Creator and heading toward 'İnsan-ı Kamil' (perfect state of being)."

Today you can attend a Sema ceremony at the Galata Mevlevi House every Sunday at 5 p.m. For more information about the Mevlevi Order you can visit the Yenikapı Mevlevi House. There are also Sema ceremonies throughout the year arranged by the International Mevlana Foundation.
Last Update: May 08, 2014 1:54 am
RELATED TOPICS